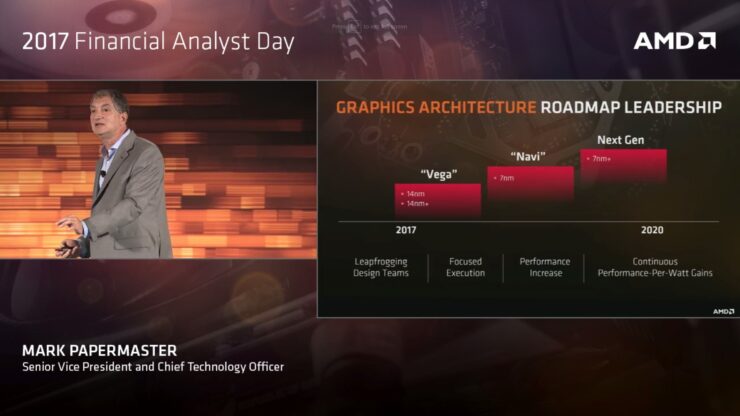 AMD unveiled today at its Financial Analyst Day its long-term graphics roadmap well into 2020, confirming for the first time that its next generation Navi graphics architecture will in fact be built on 7nm FinFET.

Navi will feature a yet unannounced next generation graphics memory technology. This could either refer to an HBM2 successor technology or GDDR6. Interestingly, AMD's presentation hints at a Vega refresh following this year's release based on a more high performance version of the 14nm process, namely 14nm+.

The 7nm FinFET manufacturing process for Navi is being developed for high-performance products in partnership with GlobalFoundries. These include data centers, networking applications, high performance processors and deep learning supercomputing. Navi will be just one of many 7nm products that AMD intends to introduce.

“The five-year amendment further strengthens our strategic manufacturing relationship with GLOBALFOUNDRIES while providing AMD with increased flexibility to build our high-performance product roadmap with additional foundries in the 14nm and 7nm technology nodes. Our goal is for AMD to have continued access to leading-edge foundry process technologies enabling us to build multiple generations of great products for years to come.”