We've got an absolutely humongous rumor & leak dump all about NVIDIA's next generation Ampere graphics cards for you today folks. Whispers surfaced around the techsphere that NVIDIA has been in touch with some of its partners regarding its next generation gaming GeForce graphics cards based on the Ampere architecture to communicate some big picture information about the focus and competitiveness of its next generation family of GeForce RTX 3000 GPUs ahead of the new lineup's expected release in the first half of next year.

Before we get into it, I'd be remiss not to point out that a lot of the new details you're about to read definitely fall into the rumor category, so take this information with a grain of salt. With that being said there's a whole lot to digest so let's get straight to it!

One of the very first things that NVIDIA allegedly wanted to communicate to its partners was that it's still definitely all-in on ray tracing. Ray tracing was NVIDIA's main pitch for why you, I and everyone else should buy an RTX 2000 series graphics card. However, in the vast majority of cases we've seen to date ,the performance is simply not there yet to get most people excited about Ray Tracing.

This is said to be changing with Ampere. The company is promising "massive" ray tracing performance improvements across the board with the next generation RTX 3000 series parts as compared to the current flock of Turing RTX 2000 series graphics cards. Ampere's Ray Tracing cores will be faster, more power efficient and Ampere GPUs will have more of them as compared to Turing. 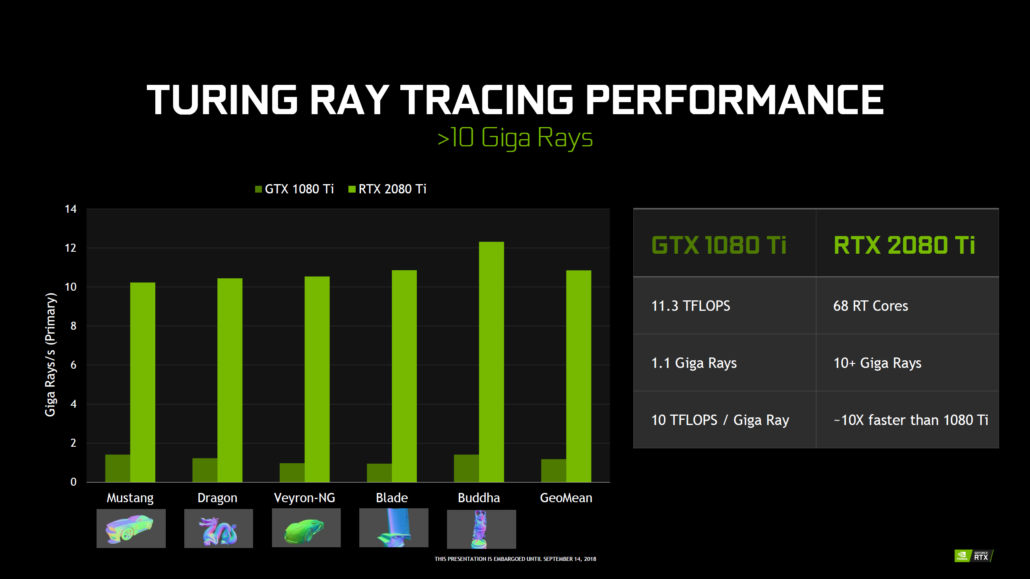 Another major area of focus in terms of performance with Ampere is going to be Rasterization. Now rasterization has been a focus of NVIDIA's for a very long time, and it's why the company's graphics architectures have traditionally held a significant lead over AMD's in processing complex geometry. This focus was initially birthed from the company's enterprise Tesla and Quadro accelerators, which professionals relied on to design and test products in a 3D environment where rasterization performance was king.

We've seen NVIDIA push the envelope on Rasterization with tile-based rasterization which was first introduced with Maxwell and had a lot to do with the architecture's incredible power efficiency gains over its predecessor Kepler. As game worlds get larger and more complex Rasterization is going to continue to play a key role in enabling next generation GPUs to render these complex worlds with more efficiency.

Ampere's focus on Ray Tracing and Rasterization really hits the nail on the head, by focusing on the areas that are going to matter most in the next generation of video games that will be coming out in the era of the Playstation 5 and XBOX Scarlett.

Moving on to the second part of this rumor dump and it all has to do with specs. Now we don't have any detailed core count & memory buffer specs, yet. But we do have some big picture details regarding the RTX 3000 series.

Ampere GPUs will allegedly feature bigger frame buffers across the board as compared to Turing. They will also run at anywhere between 100-200 MHz higher vs Turing and do it all within an even tighter power budget.  This is largely thanks to the 7nm EUV process tech that the Ampere architecture is based on, and also in part thanks to some key power efficiency improvements in the architecture itself.

Ampere GPUs will allegedly run at even lower voltage limits than Turing -- sub 1.0v even -- and there's some speculation that this could potentially limit overclocking. However, it's simply too soon to make an educated guess. Samsung's 7nm EUV process is brand new and it's just not possible to tell what it's capable of on a high-performance GPU design like Ampere until we have one in the lab to test.

This brings us to the final part of this rumor dump, and it's about pricing. The Ampere series will allegedly generally cost about the same as Turing. However, higher-end parts ( RTX 3080 & RTX 3080 Ti ) will allegedly cost slightly less than the RTX 2080 and 2080 Ti. Which should make a lot of NVIDIA enthusiasts happy.

It's important to point out that it's very early to talk about pricing, which NVIDIA tends to set pretty much at the last minute. So definitely take this with a grain of salt, although I thought it was interesting enough that NVIDIA was communicating to its partners that it's looking to make the Ampere lineup more price competitive than Turing currently is. Whether they will end up following through on this or not is still up in the air and will definitely be influenced by what AMD does with Radeon next year.

With all of that being said, NVIDIA has been VERY good at keeping a tight lid on Ampere for the past year, with very little information making it to the surface. The company has generally been the best at controlling leaks over the past several years as compared to both of its competitors Intel & AMD. So it is plausible that the green team was aware that these details were going to leak out and wanted you to know a little bit about Ampere ahead of its expected launch in the first half of 2020. I guess we will know in due time.