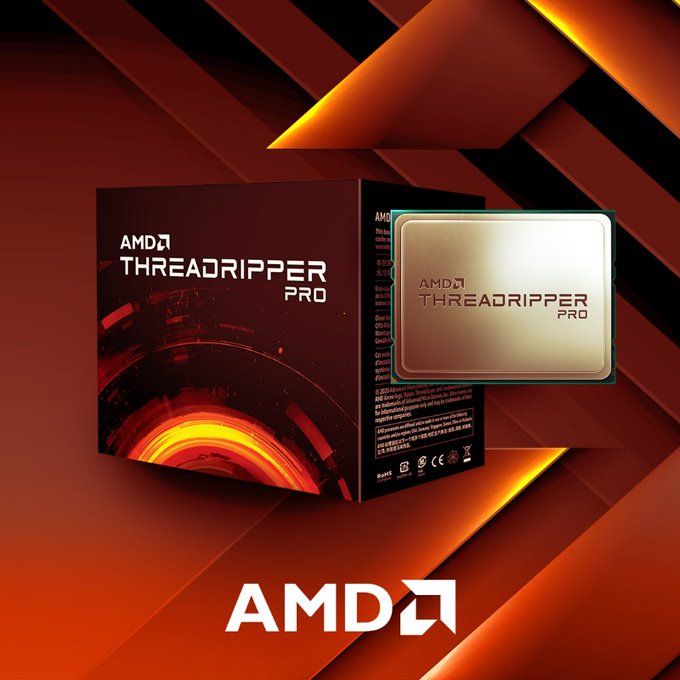 If anyone needs a 64 core and 128 thread processor for a workstation task, AMD has announced that its Threadripper Pro desktop processors and the WRX80 motherboards are now available to purchase in the DIY segment.

The AMD Threadripper PRO series makes advances in every category and one-ups the competition in most areas. It features 128 PCIe Gen 4.0 lanes which are double compared to the regular Threadripper series at 64 PCIe Gen 4.0 lanes. The mouthwatering feature for most is the 8-channel ECC support with a 2 TB max capacity (UDIMM, RDIMM, LRDIMM). The TDP for all four processors is set at 280W.

To take advantage of the Threadripper PRO, you also need to buy a WRX80 motherboard. So far, ASUS, Gigabyte, and Supermicro have made their options available. The motherboards have ridiculous amounts of I/O and connectivity. Each motherboard features 7 PCIe Gen 4.0 slots and has a wide variety of connectors. The Threadripper PRO series can support up to 2TB of DDR4 memory, but the motherboard is the limitation with all 3 models only supporting 1TB of DDR4 memory. Don't get me wrong, 1TB is a lot, but for the ultimate workstation, that extra terabyte could make a big difference.

AMD's workstation partners which include Supermicro, ASUS & Gigabyte have also announced their respective WRX80 motherboards which consumers can buy. These motherboards are the ultimate workstation solution, offering insane amounts of I/O and connectivity. Let's start with specifications and in-depth details of these motherboards.

the ASUS's WRX80 PRO WS SAGE SE features the massive SP3 socket which houses 4096 LGA pins and supports only the Ryzen Threadripper Pro series processors from AMD. Surrounding the socket are eight DIMM slots that can support up to 1 TB of DDR4 memory with speeds of up to 3200 MHz RDIMM/LDIMM. Some highlighted features of the motherboard include:

As for power, the ASUS WRX80 PRO motherboard features three 8-pin, the standard 24-pin ATX connector, and also carries two auxiliary 6-pin plugs to power the PCIe lanes. The motherboard has a total of 7 PCIe 4 slots, all full-length and all complemented by metal shielding around them. Storage options come in the form of 8 SATA III ports, two U.2 ports, and dual M.2 slots. There's an impressive array of IO on the motherboard. Just internally, we can see several front panel USB 3.2 and USB 3.0 headers. The motherboard also has power on/off and reset buttons along with a high-end audio subsystem on its own isolated PCB area. The motherboard will be priced at around 850-999 USD.

The Gigabyte WRX80 SU8 isn't just an ordinary design and that is apparent from its CEB Form Factor. The SP3 socket on the motherboard is inverted horizontally rather than in the traditional vertical position. The board carries a 10+3 phase power design, one which is powered up by dual 8-pin connectors & a 24-pin ATX connector. There are four DDR4 DIMM channels on each side of the socket and the board is listed to support 8-channel DDR4 memory with capacities of up to 1 TB. The max speeds supported by the board are 3200 MHz (RDIMM/LDIMM).

Both the WRX80 chipset, the VRMs, and the 10G Ethernet controller are cooled off by their own set of heatsinks. The WRX80 chipset is additionally equipped with an active cooling solution. Expansion on the board includes a total of 7 PCIe 4.0 x16 slots, all of which should be running at the x16 link since the AMD Threadripper Pro CPUs offer up to 128 PCIe Gen 4 lanes.

There are also four SATA ports and two M.2 ports. Internal USB ports include four USB 3.1 front panel headers. As for rear I/O, the motherboard carries dual 10GbE and dual 1GbE LAN ports, a range of USB 3.1 Gen 2 ports, DisplayPort/VGA/DVI outputs, and a 7.1 channel audio hack with AMP-UP audio technology. The board will support AMD Threadripper Pro CPUs with up to 64 cores and 280W TDPs such as the 3995WX. Additionally, you will find some cool accessories with the board too such as a Thunderbolt Add-in card and an M.2 expansion card. There's no word on the pricing or release date of the Gigabyte WRX80 SU8 motherboard but we expect it in the market in early 2021.

The Supermicro SuperO M12SWA-TF is another WRX80 motherboard that comes with the CEB form factor. The motherboard features the SP3 socket and eight DDR4 DIMM slots which can support up to 1 TB of DDR4 memory. The motherboard carries an 18 phase power delivery and features dual 8 pin connectors to boot.