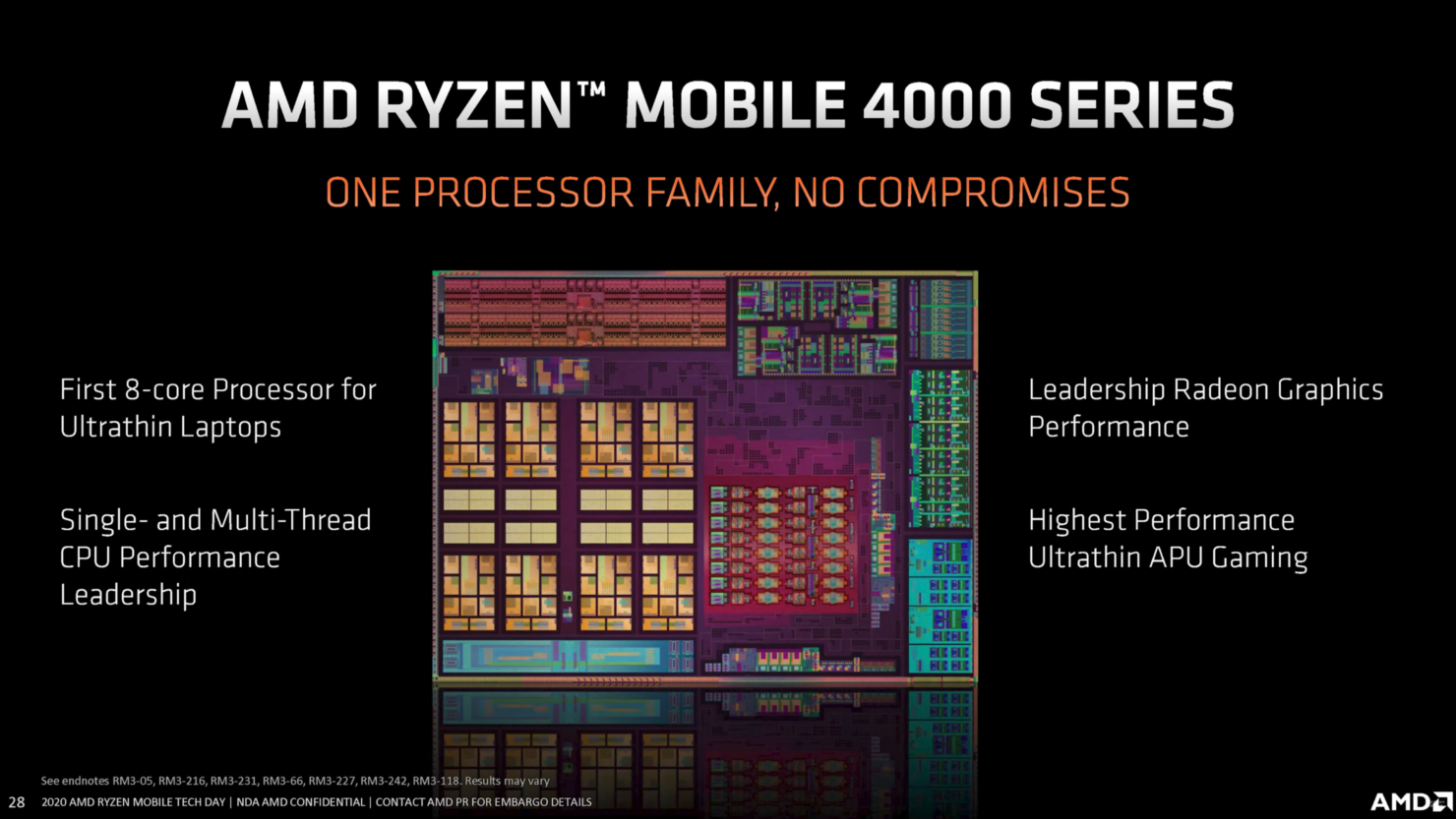 Announced at CES 2020 or should I say the last big hardware announcement before everything else had to be pushed back or canceled due to the COVID-19 pandemic, the AMD Ryzen 4000 CPUs are finally launching on the notebook segment today.

So coming to the lineup first before we state each CPU's respective market positioning, the AMD Ryzen family is made up of two processor segments, the H-series, and the U-series. The H-series chips are aimed at higher performance notebooks with each CPU conforming to a TDP figure of 45W while special binned variants of each chip, branded with the 'HS' tag, will also be shipping with a 35W TDP. The family consists of the following announced and unannounced CPUs:

The Ryzen 4000H series is what's launching today along with several notebooks that feature it. The lineup aims to offer more performance, higher efficiency & best in class performance per watt than the competing 14nm Intel CPUs that are launching on 2nd April or this same week. You can find the retail listings in the following links for a few Ryzen 4000H series laptops:

As stated above, the Ryzen 4000H series processors come in three variants, each with two different flavors. 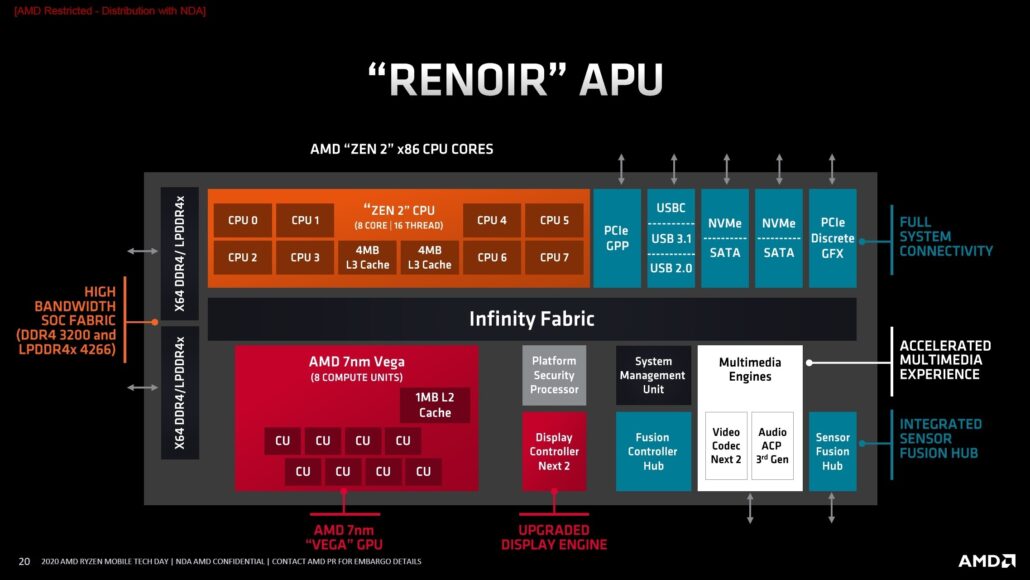 The CPU will be pitted against the Intel Core i9-10980HK and the Core i9-10880H which will replace existing 8 core Intel CPUs in the coming days however the price difference between the parts is going to be massive unless Intel plans on dropping the prices to try and compete against AMD's lineup.

In PCWorld's review by Gordon Mah Ung, the Ryzen 9 4900HS obliterates the entire 9th Gen Core i9 mobility lineup and even comes close to the desktop Core i9-9900K in the multi-threaded test while outpacing it in the single-threaded test in Cinebench R20. In his conclusion, Gordon states that the Ryzen 4000 lineup is game-changing for the notebook segment.

"To put AMD’s Ryzen 4000 in perspective, you have to understand that in AMD’s 50-year history, it has never beaten Intel in laptops. It’s won a few battles in desktop: Athlon, Athlon 64, and the current desktop Ryzen chips. AMD’s fortunes change dramatically with the Ryzen 4000 chips, which are clearly the new leader in performance laptops.

Even more astonishing is AMD’s ability to offer so much performance in such tight thermal and power constraints. While a comparably thin Intel-based laptop would have to crank up fans to annoying levels, the Ryzen 9 4900HS can do so with relatively moderate fan noise.

Worse news for Intel, AMD’s Ryzen 4000 can spar with laptops that weigh two to even three times as much. This is something we frankly didn’t expect. Ryzen 4000 is without a doubt the most game-changing performance laptop CPU we’ve seen in years."

You may also want to check out reviews of the ASUS Zephyrus G14 which features the Ryzen 9 4900HS from Hardware Unboxed and HardwareCanucks below:

The AMD Ryzen 7 4800H/HS is the second chip in the lineup. The processor features 8 cores and 16 threads with a boost clock of up to 4.2 GHz and 12 MB of cache with the HS variant featuring a 3.0 GHz base clock while the H variant features a lower 2.9 GHz base clock. It also comes with Vega 7 graphics core that clocks in at 1600 MHz. The CPU will tackle the Core i7-10875H and the Core i7-10750H, both of which have similar pricing but different performance tiers due to one offering 8 cores and the other offering 6 cores with the former being more of a panic response from Intel to tackle the Ryzen 7 4800H/HS.

In terms of its performance ranking, the Ryzen 7 4800H is currently the fastest notebook CPU on the planet according to PassMark but the benchmark does not include Ryzen 9 4900H which will easily dethrone the Ryzen 7 4800H due to its higher clock speeds. Once the CPU is added, we can see a PassMark score that ends up at 20K or even exceeds it which is quite a huge feat for AMD. 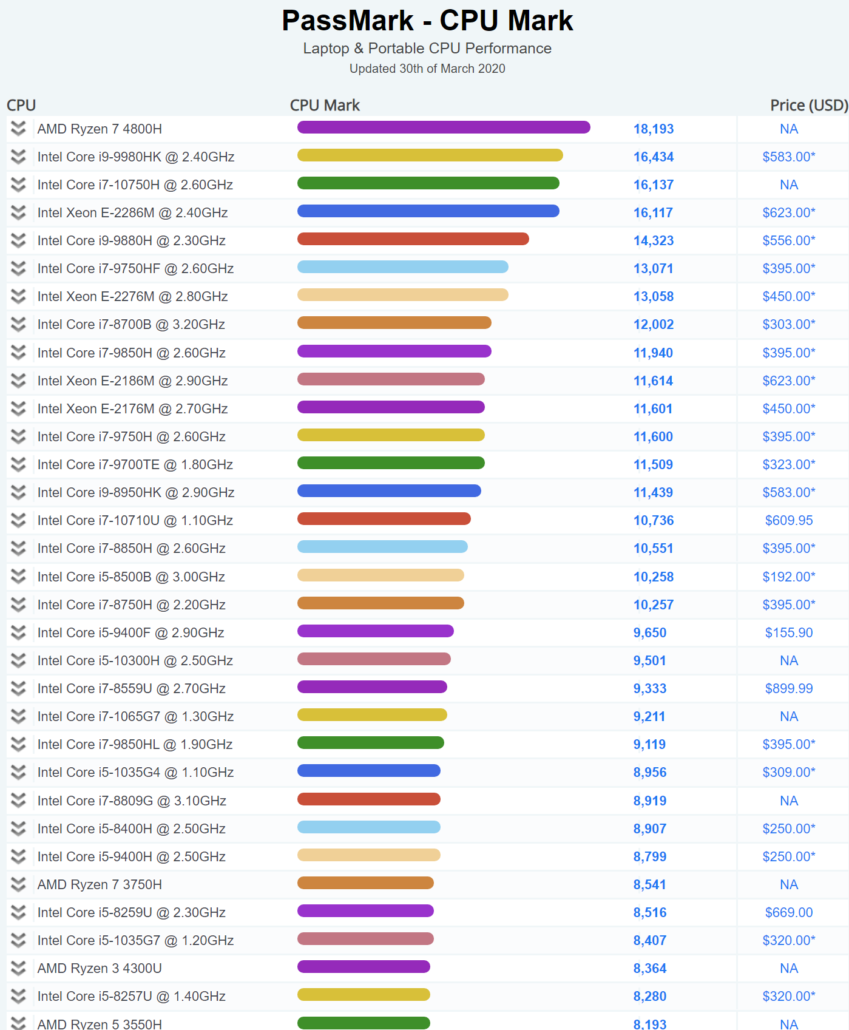 We should also mention that the ASUS TUF Gaming A15 notebook which we recently reported on has been tested by Expreview in their review and call it immensely powerful for the money you are paying for it. The MSI Bravo 15 laptop featuring the AMD Ryzen 7 4800H was tested by Techtesters and this notebook comes with a discrete Radeon RX 5500M which makes it a full AMD powered laptop design. The review can be seen below:

Lastly, we have the AMD Ryzen 5 4600H/HS which comes with 6 cores and 12 threads. This chip also comes in H and HS variants with both variants offering the same clock frequencies of 3.0 GHz base and 4.0 GHz boost. The chip carries 11 MB of total cache and packs 6 CUs or 384 cores that are clocked at 1500 MHz. This chip will tackle the mainstream performance mobility chips from Intel such as the Core 5-10550H and the Core i5-10500H. AMD Ryzen 4000H/HS processors support both DDR4-3200 MHz and LPDDR4-4266 MHz memory.

So to sum it up, it looks like after disrupting the enthusiast desktop and mainstream desktop space with its Ryzen processors, AMD has managed to do the same in the notebook segment which is an even bigger feat than both desktop platforms combined. Intel is expected to release its 10th Gen Comet Lake-H CPUs in a few days so that would definitely heat up the competition in the mobility space but for now, AMD seems to be all set to conquer more of that good mobility market share from Intel. AMD expects to ship the first Ryzen 4000 laptops in this quarter with 100+ models shipping in the entirety of 2020.