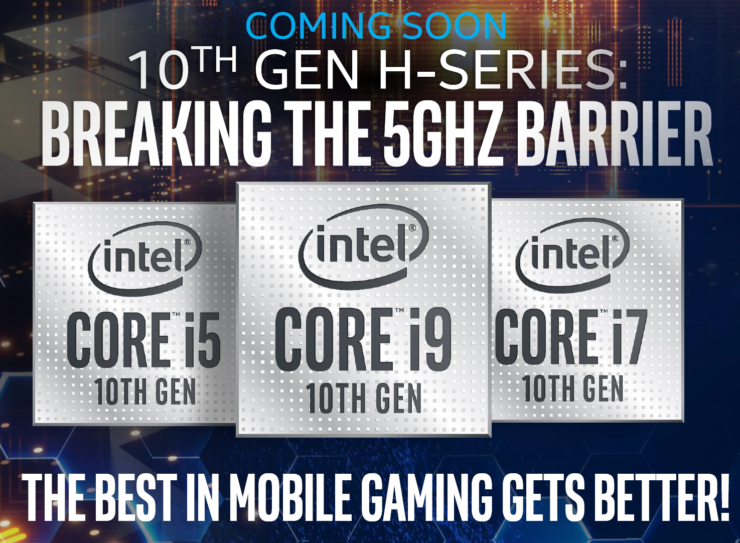 Intel has just announced at CES 2020 that they will be launching their latest 10th Gen Core CPUs as part of the Comet Lake-H family. The new processors will be aimed at high-performance NUCs and gaming notebooks which are expected to ship in the coming months.

In terms of clock speeds, Intel has stated that the 10th Generation Core i7 CPUs would feature up to 5.0+ GHz and you can expect even higher clock speeds on the Core i9 model. Of course, actual clocks would entirely depend on the cooling and thermal design of the gaming notebooks in which these processors will end up. Intel would also feature their Thermal Velocity Boost technology on the higher-end SKUs, offering even higher boost spikes with unconstrained cooling performance.

In comparison between the AMD Ryzen 7 3700U and the Core i7-10710U, the Intel chip was up to 3.00x faster while the Core i7-1065G7 was up to 5.71x faster. In gaming, the Ice Lake chip was up to 63% faster but the Vega GPU managed to come close or even outperform, even if by a slight margin, the newer Ice Lake Gen 11 GPU. It's also worth noting that the AMD chip being compared is a quad core with 8 threads while the Intel 10th Gen Comet Lake-U CPU offers a total of 6 cores and 12 threads. Intel also uses their 4 core, 8 thread Ice Lake-U in comparison with the AMD Ryzen chip which is much more fair case for both chips. The point being that Intel is showcasing advantages of both Ice Lake-U and Comet Lake-U in certain workloads.

AMD is soon going to announce their new Ryzen 4000 series mobility chips with 8 cores and 16 threads based on the Zen 2 architecture at CES 2020 so that is also something to keep in mind for these comparisons. Finally, Intel refers to their 10th Gen CPU battery times which is shown to offer more life on a single charge compared to AMD's Ryzen based notebooks. It is also good to see Intel being more transparent in their benchmarks, showcasing the exact system configurations used & settings in which each performance metric was measured.

Lastly, Intel also talked about their Tiger Lake CPUs and its new AI engine. They plan to give a sneak peek on it but we aren't really sure if that would be an AI-specific demo or a general performance demo.

Intel's CES 2020 keynote is in a few hours so stay tuned as we will have a Livestream post for it up soon.