AMD's Ryzen 5000 CPU family launches in less than an hour but let's also focus on new leaks surrounding the AMD Radeon RX 6800 XT. In fresh BIOS leaks for the ASUS ROG STRIX variant, Igor's Lab has revealed the temperature limits and clock profiles for the RX 6800 XT card which seems to be one of the top variants in ASUS's RX 6000 series lineup.

Using the MorePowerTool, developed by Igor's Lab, it is revealed that the ASUS ROG STRIX Radeon RX 6800 XT graphics card features at least four modes. These modes include Quiet, Balance, Turbo, and the much anticipated, Rage mode. The Quiet and Balance modes have temperature limits set to 80C and the same goes for Rage mode. However, Turbo mode seems to be the most aggressive of the four with a temperature limit of up to 95C. 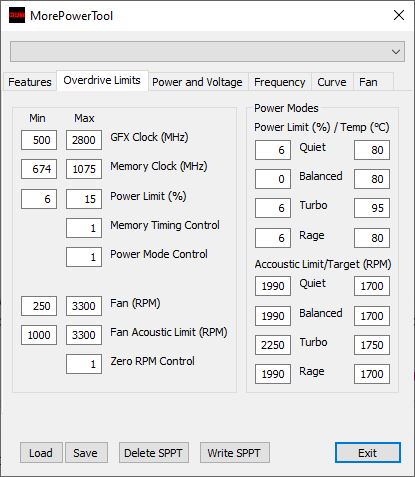 In terms of clocks, the Quiet, Balance, and Rage modes have stock clocks set to 1700 MHz while Turbo mode once again leads with a 1750 MHz base clock. When it comes to boost clocks, ASUS has rated the Quiet/Balance/Rage modes at 1990 MHz while the Turbo mode has max clocks set to 2250 MHz. These are definitely not final clock speeds but just what the existing BIOS allows AIBs to tune their cards around. The ASUS ROG STRIX Radeon RX 6800 XT will be offering much higher GPU clocks out of the box than the reference variant.

Within the MorePowerTool, you can see that the maximum graphics clock can be tuned to 2800 MHz and 1075 MHz for the memory. That is 17.2 Gbps or a 7.5% increased memory clock over the reference 16 Gbps speeds. The fan speeds can be adjusted to 3300 RPM at max speeds.

The AMD Radeon RX 6800 XT also packs 72 Ray Accelerators which are dedicated to real-time raytracing workloads. The card will feature a based TBP of 300W with factory-overclocked models pushing it above 350W and will arrive at a later date.