AMD has inadvertently confirmed that they are showing off their brand new Radeon lineup at Polaris Tech Day in Macau. The new AMD R9 480(X) Polaris flagship part was pictured in a tweet (now removed) by an AMD employee and shows the card running Doom at 1440p resolution. The nomenclature of AMD's upcoming flagship is also stated on the card alongside the running demo: AMD Radeon RX 480.

This image from an AMD employee's twitter was later deleted.

AMD's Polaris architecture is the company's first foray into FinFETs (specifically 14nm FinFET) and will succeed the 28nm generation of graphics cards that has been with us for so long. That said however, and like we have suspected for quite some time (and reported on) the card will not be a replacement for the high end Fiji GPUs - rather, it will aim to target the lineup positioning of the R9 390. This is the first time we have received any kind of official confirmation (an accidental confirmation considering the tweet was later deleted) on the R9 480 series, or rather RX 480 as AMD is calling it here. It also confirms that the tech day that AMD is having over at Macau is indeed about Polaris GPU and the new lineup of graphics cards.

Here is the thing however, we are sure that we will not be getting the full details of the event. Editors attending the event have signed an NDA that expires on the 29th of June, which is probably when the cards will actually be launched.  It remains to be seen what information (if any) AMD will allow  them to go public with. Till that time comes however, thanks to the tweet, we have a reasonable approximation of the performance of the AMD RX 480 Graphics Card. 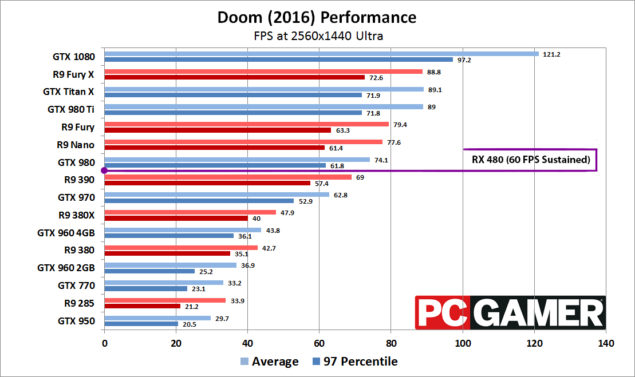 The monitor in question is a FreeSync capable monitor which has a native resolution of 1080p (I assume it is running 2560x1440p with Virtual Super Resolution enabled). Correction, I do not know what frame rate the demo was running at. Since we are talking about a variable refresh rate monitor here (capped at 144 Hz) it could have been any number below that. I annotated a similar 1440p Doom benchmark from PCGamer to make life a bit easier for our readers. If the card can sustain 60fps at 1440p, then you are looking at performance levels between an R9 390 and an R9 Nano graphics card.

This would also mean that you are looking at price points around the $269 - $300 mark with the flagship Polaris GPU. AMD had initially revealed that it aimed to increase the Total Available Market of VR by making the minimum VR spec more affordable for everyone, and it looks like this is going to be the case here. One thing is for sure though (caution: opinion), the RX 480 is not an ultra high end graphics card and will probably perform under Nvidia's new GTX 1080 graphics cards. The enthusiast level GPU will be coming later and will be code named Vega 10.

The partial but clear, reconstructed shot is that of Polaris 10 (aka Ellesmere XT). The die appears to be roughly 232mm² which is the exact same number we have seen before. This makes it highly unlikely that we are looking at sheer coincidence and probably means that Polaris 10 GPU is, in fact, of that size. We are talking about the Samsung/GloFo 14nm LPP process here, so the size would be optimal in terms of yield and power efficiency. The second die (blurry and full shot) is Polaris 11 (aka Baffin XT). Polaris 11 is the smaller GPU which will be targeting the mobile GPU market and should offer the sweet spot of the Polaris efficiency claim (2.5x increase in perf/watt).

PowerColor RX 480 Gets an Unlocked BIOS Switch for Extreme Tweakers