Not much is known about the upcoming 14nm FinFET architecture from AMD: Polaris. What little we know comes from the revealed press decks and presentations at events like VRLA. AMD's Roy Taylor discussed the Polaris Architecture at the expo and talked about how easily Polaris GPUs can target the VR market. As most of you know, the Oculus VR headset requires a "minimum specification" of GPU to run it. This specification is currently listed as a GTX 970/R9 290 GPU and it looks like Polaris will be aimed to bring this minimum spec within reach of more people. 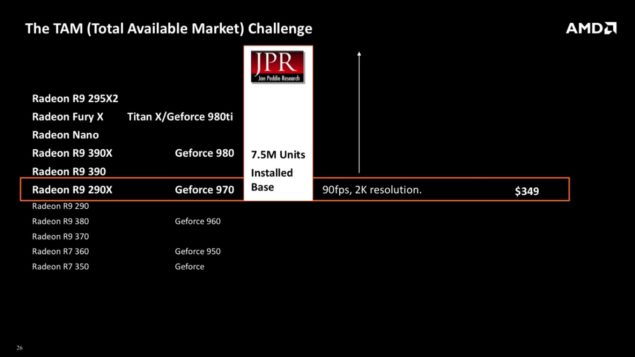 A slide from the VRLA Winter Expo 2016. @AMD Public Domain

Before we go any further, a little bit of context is in order. Running virtual reality headsets such as the Oculus Rift and HTC Vive requires quite a bit of horsepower, which in the case of the Oculus Rift is 2k resolution at 90 frames per second. This graphical horsepower can be produced by GPUs equivalent (or more) in power to the GTX 970 or the Radeon R9 290. Both these GPUs cost $349. So if we take a look at the sales data of these GPUs as well as the GPUs above this mark, we will be able to calculate something called the total available market for VR - which is the number of users that can actually run any VR product on these headsets. AMD believes, that Polaris architecture will be efficient enough to address this problem:

Now I would like to address a different challenge for us - and that is what is called a Total Available Market. One of the issues we have is the minimum spec for the PCs which will run the Occulus and the HTC headset ant 90 fps and 2k resolution. Now to do that you need either a Radeon 290x or the GTX 970 both of which retail for $349. The challenge that we have is if you look at the total numbers of these GPUs that have been sold, according to JPR, that’s an install base of just 7.5 Million units. Now that’s an issue because it means you can only sell 7.5 Million of anything – because that’s the number that can run those headsets. I am very pleased to tell you that we have invented something called Polaris which we think will address this problem. - AMD's Roy Taylor 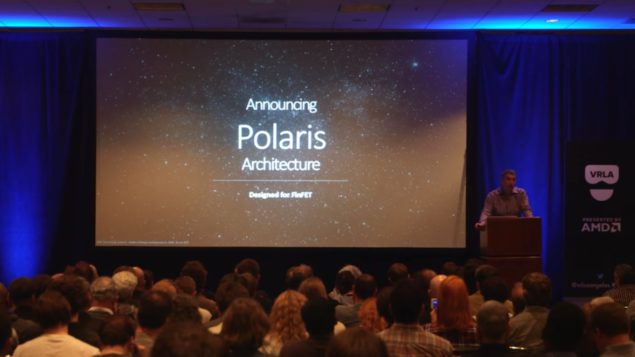 The shift to 14nm becomes highly significant in this aspect. Not only does the die shrink allow for more transistors to be placed on the same surface area, it increases economies of scale - lowering cost. Not only that but the maturity of the process (14nm LPP has a 20nm backbone) would allow good yields and more volume to be shipped. AMD hopes to exercise this advantage by lowering the cost of "minimum spec VR" to a point below the $349 mark - making VR available to everyone and increasing the Total Available Market for VR.

AMD has just completed the shrink to 14 nanometer [with Polaris Architecture]. What this means is, and this is where it comes home to everyone in this room, is that we can produce GPUs that will run the minimum spec of VR at a lower cost, in larger volume, consuming less power and running faster. That means in the second half of this year and going forward more people will be able to run those headsets which will make a larger for everybody in the room [VR Industry]. - AMD's Roy Taylor

This has interesting implications. This will almost certainly mean that AMD is going to be shipping Polaris GPUs that are at least in equivalent in power to the R9 290 at a cost much lower than the $349 MSRP of the original. [Opinon] I expect we will see Polaris GPUs at the $250 mark that will match or exceed the performance of Hawaii counterparts in 2H 2016.  [/Opinon] It goes without saying that this does not mean that minimum VR spec will be the limit of AMD's 14nm GPUs - rather that the Polaris architecture is so efficient that it can be leveraged to increase sales in the lower end segments by offering more performance at the same dollar amount. The shift from 28 nm has been a long time coming, and things are about to get very exciting for PC gaming enthusiasts all over the world.

AMD Polaris Next Generation Graphics Architecture is 2.5 Times ‘Brighter’ Than Its Predecessor