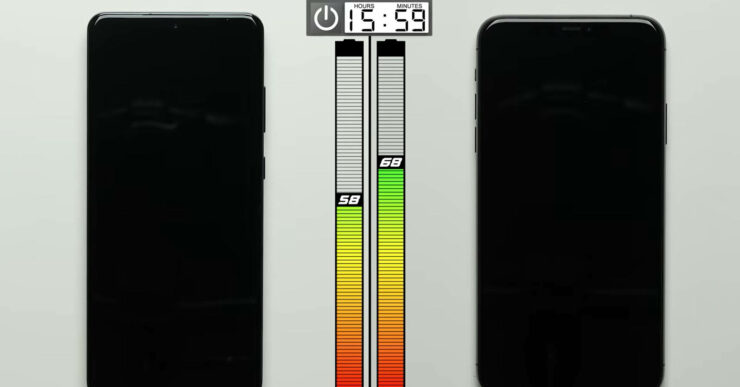 The Galaxy S20 Ultra goes big in not just sheer size, but also in hardware specifications, but how well does it fare against the iPhone 11 Pro Max in the newest battery test? Well, you might think that it outright smokes Apple’s flagship right? The results might surprise you and if you don’t believe us, why not take a look at the test yourself and find out.

PhoneBuff believes that because one of the standout features belonging to the Galaxy S20 Ultra is its 120Hz refresh rate, the battery test decided to keep this enabled. PhoneBuff also states that it will be conducting a 60Hz and 120Hz refresh rate test to see how much battery life you get on both settings. Coming to the Galaxy S20 Ultra battery test, right from the start, the iPhone 11 Pro Max maintains its lead over Samsung’s flagship when it comes to a variety of scenarios.

To make the battery test as fair as possible, both the displays and speakers were calibrated. The only difference here is that the iPhone 11 Pro Max’s display was running at 60Hz, which we believe was a bit unfair and it doesn’t provide an ‘apples to apples’ comparison. As for which tests were run in order to drain both batteries, PhoneBuff first started out with a one-hour phone call, followed by a texting run, then an email test, where both the Galaxy S20 Ultra and iPhone 11 Pro Max were used to scroll through the contents of that email.

After browsing through Instagram, both the iPhone 11 Pro Max and Galaxy S20 Ultra were tested using a standby mode for 16 hours, with Apple’s flagship still maintaining a strong lead over its biggest rival in the smartphone space to date. After a YouTube run, both handsets’ batteries were strained using a gaming test, and since the Galaxy S20 Ultra is playing the game with its 120Hz refresh rate enabled, the drop in percentage points happened a lot faster here.

Overall, it was surprising to see the iPhone 11 Pro Max obtain a lead over the Galaxy S20 Ultra, but we also have to remind ourselves that the results could have very different if Samsung’s flagship’s display setting was set to 60Hz instead of 120Hz. Hopefully, we’ll get to see a better comparison in the future, but we’d love to know your thoughts regarding the outcome.