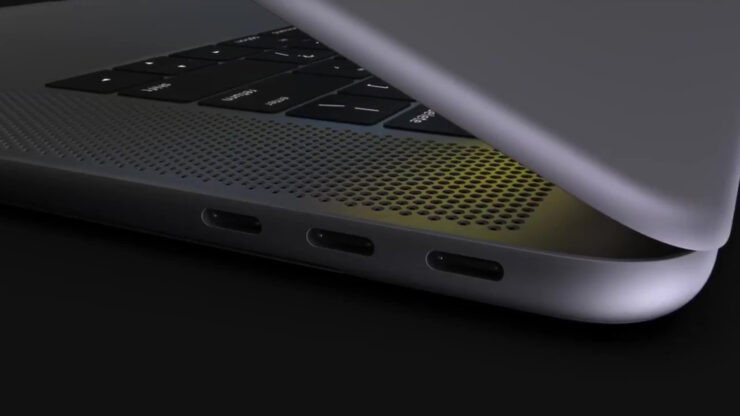 After retiring its 17-inch MacBook Pro, Apple maintained a 15.4-inch diagonal screen size for its powerful family of notebooks, but that can change in the near future. While it is yet to be launched, this 16-inch MacBook Pro concept is certainly a treat to look at and Apple could certainly note down a few pointers in readying the design of its upcoming notebook for professionals.

The images were part of a video made by EverythingApplePro showing the 16-inch MacBook Pro concept with a near bezel-less LCD display. On both sides of the keyboard, speaker grills can be seen and it seems to be inspired by the new Mac Pro. The designer believes that the large holes can also be used to let out heat and keep the system cool while doubling as stereo speakers.

The MacBook Pro depicted in the renders also gets three Thunderbolt 3 ports on the right-hand side. The concept also envisions a Face ID system that’s hidden beneath the display, to make sure the display maintains its edge-to-edge form.

A few days back, IHS Markit claimed that Apple is planning to release a 16-inch MacBook Pro this fall. The research firm says that if everything goes smoothly, we can see Apple unveil the new notebook during its September event, but Apple has never ever unveiled new MacBook models during its iPhone keynote. Coming back to the 16-inch MacBook Pro concept, the background used in the machine is most likely inspired by the one used on Apple Pro Display XDR, which is a nice touch when it comes to the little details.

As for the actual 16-inch MacBook Pro, it is expected to come running macOS Catalina and it will also have a new, more powerful CPU under the hood. Apple has already provided an option to configure its current 15-inch MacBook Pro with the Intel Core i9-9980HK 8-core processor, meaning that the technology giant will most likely partner with Intel and choose something that delivers more kick.

The firm also believes that the LCD screen of the MacBook Pro will have a resolution of 3,072 x 1,920, which is higher than the 2,880 x 1,800 pixels running in the 15-inch version. If the rumors about the screen size are true, the 16-inch MacBook Pro will become the laptop with the largest display in Apple’s MacBook lineup. Prior to this, the Apple analyst Ming-Chi Kuo had also hinted at the possibility of Apple releasing a MacBook Pro with a display of 16-16.5-inches.

As for the 16-inch MacBook Pro concept video, you can check out the clip below if you wish, and also let us know down in the comments if you have a wishlist from Apple’s upcoming machine.