According to rumors flying on the Web, Apple is set to release a new set of MacBook Pro notebooks this year which are going to be faster, and of course, thinner, compared to the current lineup. But what will the new notebooks visually look like is anyone's guess at this point. One designer took a bold step and took it upon himself in conceptualizing Apple's future Pro notebook, and the results are actually quite staggering. 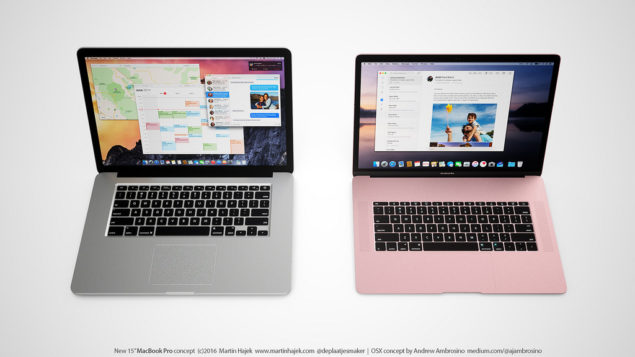 The 2016 MacBook Pro Looks Epic, But It Could Use A Little Work To Become Absolutely Perfect

Rather than going all out and design something from the ground up, Martin Hajek redesigned the current 12-inch Retina MacBook and gave it a bigger display, while also moving things around a little. The results? Beautiful, to say the least.

Check out the entire gallery down below. Make sure you click on the image itself to get a larger view.

So there is this rumour about a new, thin design for the MacBook Pro..

I took my 3D model of the MacBook (you can download it by clicking here) and scaled it up.
A bit.
To like 15″ size.
Below are some comparisons with the current retina Macbook Pro (15″) and the 12″ MacBook.

The beautiful OSX concept is by Andrew Ambrosino - check out his blog post by clicking here!

PS.
I’m sure that it will come in other colours than rosé gold…

The new 2016 MacBook Pro concept indeed looks stunning if you're asking us. But the one thing that looks slightly out of place is the keyboard, and we believe that it could use a little more work so that it doesn't look out of place. Rest is all good, we believe.

Given how Apple has started to melt its Rose Gold color option over all its hardware lineup, it would be quite refreshing to see if Apple pulls off the same move on the upcoming 2016 MacBook Pro as well. Apart from that, we really wish the notebook is available in the Space Gray color option. But of course, we can never be too sure what Apple's plan might be. It's quite possible the company will again stick to a silver notebook.

What do you think about the above concept by Martin Hajek? Do you think Apple's upcoming MacBook Pro should be made in this image, or are you expecting totally different? Be sure to leave your thoughts and comments in the section below.