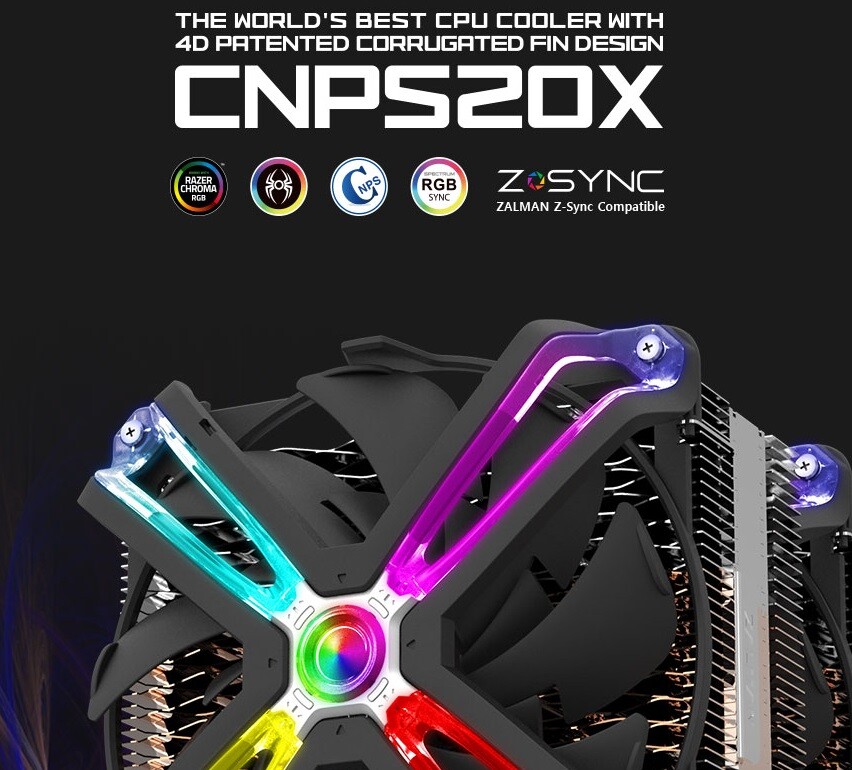 Zalman has announced the CNPS20X Twin Tower CPU cooler, and this large air-cooler features the ability to cool up to 300-watts TDP. The CNPS20X Twin Tower CPU cooler has many features to allow for more efficient thermal transfer from the CPU to the heatsink, this technology includes RDTH (Reverse Direct Touch Heatpipe), DTH (Direct Touch Heatpipe), and IHD (Interactive Heatpipe transfer Design). Alongside the wide range of Heatpipe technology, this CPU cooler features a new fin design as well as having Zalman's Dual Blade impeller technology. This CPU cooler features support for both Intel's Processors as well as AMD's latest processors.

Zalman's CNPS20X Twin Tower CPU cooler's heat pipe technology provides for fantastic thermal transfer. The combination of RDTH, as well as an evolution of DTH, are used in the heat pipes to facilitate the more efficient thermal transfer. These heat pipes also make use of IHD, which further increases the thermal performance, Zalman has claimed that the IHD technology brings a 20x performance improvement in heat dissipation.

The heatsink also has some new improvements, the heat sink having a 4D corrugated fin design, some fins are built out of copper instead of aluminum. The 4D corrugated fin design means that the fins located on the heatsink have been bent, allowing for more airflow from the heatsink's heat pipes. The heatsink also has some copper fins mixed in with the standard aluminum fins, and this is done because of copper property to offer transfer more heat, more efficiently when compared to aluminum.

The fan that cools the heat sink makes use of Zalman's Dual Blade impeller technology, Zalman has stated that its biomimetic design was not only inspired by spider legs, but also allows for reduced vibration and noise. This design uses a housing leg structure of 4x2, which absorbs a large amount of noise and vibration, which is created by the rotation of the impeller.

For lighting, this CPU cooler features LEDs on each side leg of the fan, as well as a circular LED on the center of the fan. These LEDs feature support for major RGB lighting software, and this includes Razer's Chroma RGB.

The CNPS20X CPU cooler is available at a price of roughly €90.