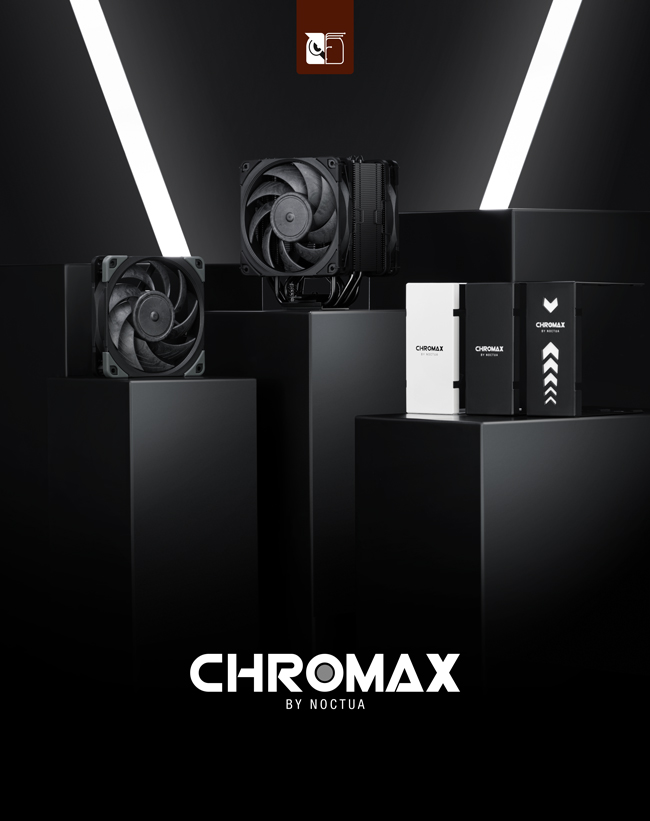 Noctua has announced the launch of its Chromax line of the NH-U12A CPU cooler and NF-A12x25 fans that now come in black-colored flavors. Alongside the Chromax lineup, the company has also introduced its NA-HC7 and NA-HC8 heatsink covers, available in white or black colors.

We are aware of how eagerly our customers have been waiting for these products and we would have loved to get them out earlier, but first we had to spend some extra time in order to make sure that we can exactly match the performance of the brown fans, and then things were further delayed by various supply chain issues due to the global pandemic”, explains Roland Mossig (Noctua CEO).

“With products that have been fine-tuned to the most minute details, seemingly simple things like creating a different colour version can end being surprisingly tricky, but now with all of that out of the way, we’re excited to finally be able to offer these long-awaited products to our customers.

Having received more than 100 awards and recommendations from international hardware websites and magazines, Noctua’s flagship model NF-A12x25 has established itself as a true deluxe choice when it comes to premium-quality quiet 120mm fans. The new chromax.black.swap edition combines the NF-A12x25’s signature quiet cooling performance with an attractive black design and a bundle of swappable red, white, blue, green, grey, yellow, and black anti-vibration pads that allow for the fan to be color-customized to match individual build color schemes. For further customization, a wide range of accessories such as colored cables and anti-vibration mounts are available separately.

The NH-U12A has proven in countless tests that it can match or even outperform many 140 mm-sized coolers while offering 120mm class case, RAM, and PCIe compatibility. Thanks to the same proven asymmetrical single-tower heatsink design and state-of-the-art NF-A12x25 PWM fans, the new chromax.black variant stays true to the NH-U12A’s successful formula of fusing best-in-class cooling performance with superb quietness of operation and outstanding compatibility. The NH-U12A chromax.black includes the latest SecuFirm2 multi-socket mounting system that not only supports AMD AM4 and Intel LGA1200 but also Intel’s upcoming 12th generation Core CPUs (code name Alder Lake-S, socket LGA1700).

In addition to the new fan and heatsink, Noctua also launched the new NA-HC7 and NA-HC8 heatsink covers for the NH-U12A and NH-U12A chromax.black. While the chromax.black and chromax.white variants of the NA-HC8 are ideal for all-black or black-and-white builds, the NA-HC7 chromax.black.swap with its swappable color inlays in black, blue, green, red, yellow, and white allows the cooler to be color-coordinated with various build color schemes.

Availability
All the new products are available as of today via Noctua’s official Amazon stores: