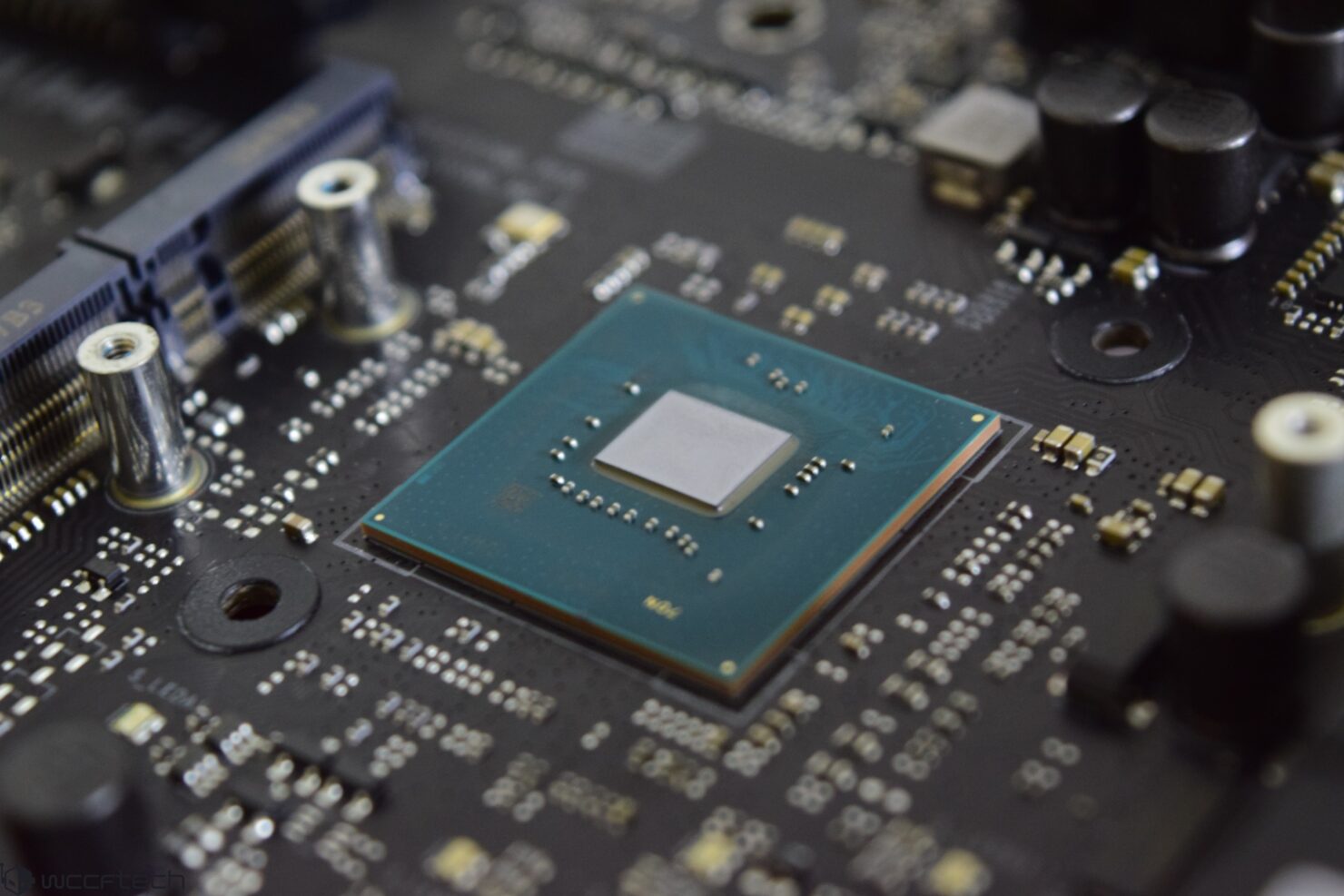 Intel's Z490 launched last month and it has had its fair share of issues. The Intel Z490 platform is not only designed to support existing 10th Gen Comet Lake-S CPUs but will also offer support for the 11th Gen Rocket Lake-S CPUs. Based on that, one of the primary features of the Z490 boards has been its support for PCIe Gen 4.0 devices which will be enabled with the upcoming processors but it looks like one of the major board manufacturers has missed out big on PCIe Gen 4 support for its Z490 lineup.

ASUS Misses Out on PCIe Gen 4.0 Support on Its Z490 Motherboard Lineup, No HW-Level Integration For Next-Gen Rocket Lake-S CPUs

We had reported in our exclusive all the way back in April that Intel's Rocket Lake CPUs will be compatible with Z490 motherboards and the said motherboards will be getting PCIe Gen 4.0 hardware integration by board makers. From what we learned, initially, Intel did not plan to introduce PCIe Gen 4.0 support on its Z490 platform. However, after talking to a few partners, decisions were made to allow board makers to add PCIe Gen 4.0 support to their boards even though they won't be enabled till the very end of the current or event early next year.

While some motherboard makers were in active talks with Intel but were advised to display the related PCIe Gen 4.0 material only after the media/press embargo concluded. The board makers also had to check in with Intel and provide related materials that partners will be using for their Z490 marketing campaigns beforehand. Three of the big board manufacturers, namely Gigabyte, MSI, and ASRock were actively working on implementing the said PCIe Gen 4.0 technologies on their respective Z490 motherboards however ASUS didn't get the word on time.

As per one of our sources, it seems like Intel had initially responded ASUS to stick with its original plan of not introducing PCIe Gen 4.0 support on Z490 boards as 10th Gen CPUs will not be offering support for the said features. This was prior to other board manufacturers commencing what you may call 'negotiations' with Intel to add the said feature to its respective motherboards. As the days went by, we saw conclusive evidence starting to come forward that Z490 boards will indeed get the PCIe Gen 4.0 support.

Marketing materials from several vendors revealed that to be PCIe Gen 4.0 ready, you don't just need a CPU that supports it but also require hardware-level integration on the board themselves. Essentially, to make PCIe 4.0 work, you require the following hardware to be integrated on Z490 motherboards:

An interesting follow-up to this story is provided at Gamer.tw forums where you can see in detail about the said platforms and their respective support for PCIe Gen 4.0. Apparently, while the Z490 boards do support PCIe Gen 4.0 signal, it's only possible through the CPU PCI lanes as the PCH is still based on PCIe 3.0.

It's not only that you need the orientation of the proper slot to make PCIe Gen 4.0 work but as said earlier, you require necessary clock generators, re-drivers, and switches too. MSI and Gigabyte rely on the IDT6V4 1821BN Gen 4 clock generator on all of their Z490 motherboards while ASUS relies on the PRO Clock II controller for the two motherboards that do support Gen 4.0. MSI & Gigabyte have the P13EQX16 re-drivers for most of their motherboards as its an optional requirement while ASUS only has one motherboard in their sleeves that features it. The same goes for the switches but here, MSI takes a win over Gigabyte with P13DBS16 switches across all models while Gigabyte only offers P13DBS switches on a partial list of models. ASUS so far has only one model that supports the said re-driver.

Following are the motherboards that ASUS claims support PCIe Gen 4.0: 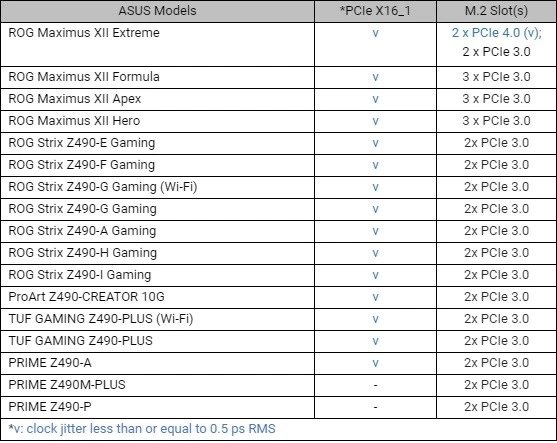 So coming to the conclusive evidence provided by the forum member, we get to look at the PCB of several motherboards from MSI, ASUS, Gigabyte, and ASRock. You can see in the images below for several Z490 boards that aside from ASUS, almost every other motherboard manufacturer has got PCIe Gen 4 support right. As for ASUS, only its top two motherboards, the ROG Maximus XII Hero & the ROG Maximus XII Extreme retain the necessary requirements to get PCIe Gen 4.0 to work.

From the list of motherboards that the user got to test, MSI, ASRock & Gigabyte are fully compliant with the PCIe Gen 4.0 hardware standards. This raises the question for ASUS's marketing team who had previously claimed that PCIe Gen 4.0 will be supported on all motherboards whereas the real evidence shows that's not the case. 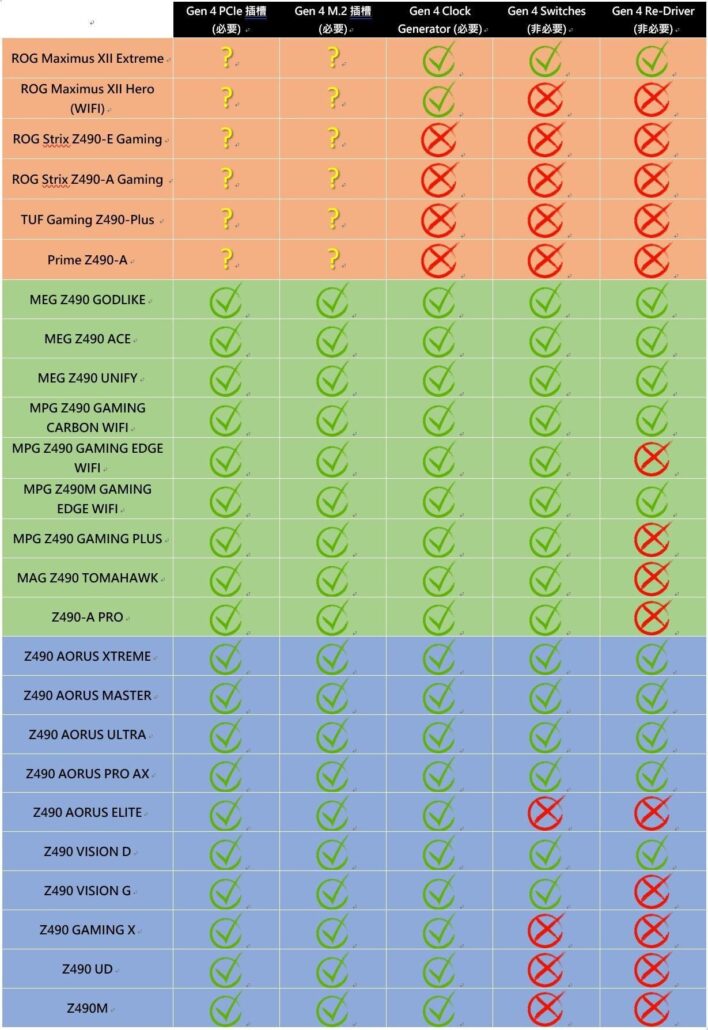 In the coming months, we will see the launch of next-gen PCIe Gen 4.0 ready graphics cards from both NVIDIA and AMD along with the release of several next-gen SSDs based on the NVMe form factor that supports the Gen 4 protocol. If you're planning on building a PC on the Z490 platform, then it will be essential for you to reference these details when making your purchase so that you get the proper next-generation hardware support with PCIe 4.0 ready boards.