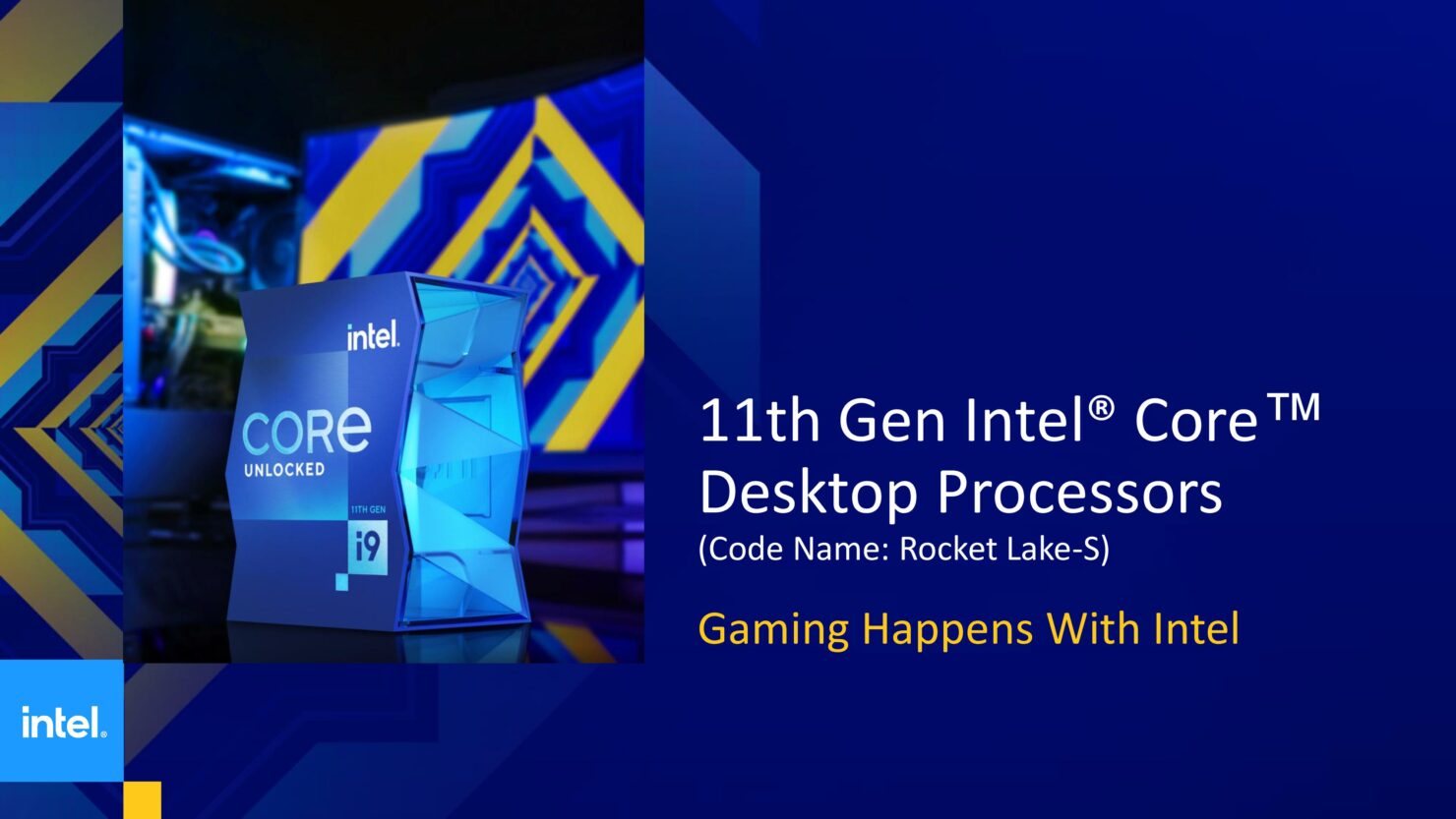 Intel's Rocket Lake is one of the most anxiously anticipated launch in almost a decade. It marks the first move away from the wider Skylake macro-architecture (since Haswell) and the first major revision for Intel on the 14nm process. This is the first platform from Intel that supports PCIe 4.0 and also the first of the "Jim Keller parts" on Desktop - created by the same guy that designed AMD's Zen. Intel has managed to deliver an outstanding IPC of 19% while staying on the same process (which is a phenomenal gain) and will be competitive with AMD's Zen again for the first time in almost a year.

Based on the numbers we are seeing, we even think that the flagship SKUs will beat out AMD's Zen 3 offerings core for core although whether AMD's higher core parts retain the gaming performance crown remains to be seen (Rocket Lake is limited to 8 cores). Intel's Rocket Lake processor also contain Intel Deep Learning Boost and up to 50% better integrated graphics performance. 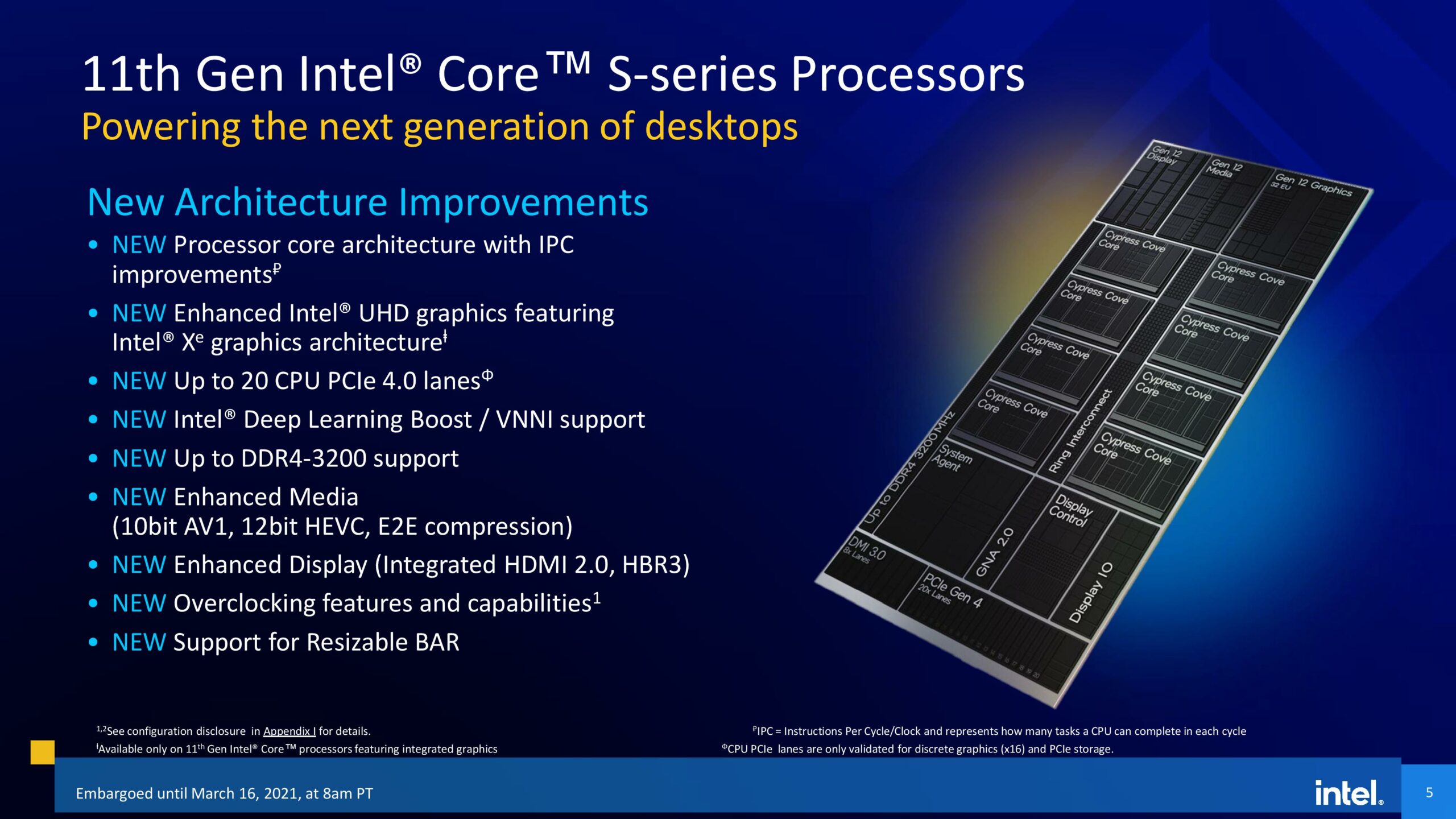 Rocket Lake will feature major architectural improvements (Cypress Cove cores) over the last generation of Intel CPUs and will house exactly 20 lanes of PCIe 4.0. Apart from Deep Learning Boost and VNNI support, it will also have native support for DDR4-3200 RAM without overclocking the IMC. 10bit AV1, and 12bit HEVC are now natively supported as well. The integrated graphics also has support for Resizeable BAR - a feature that has enthralled the gaming enthusiast community for a while now. 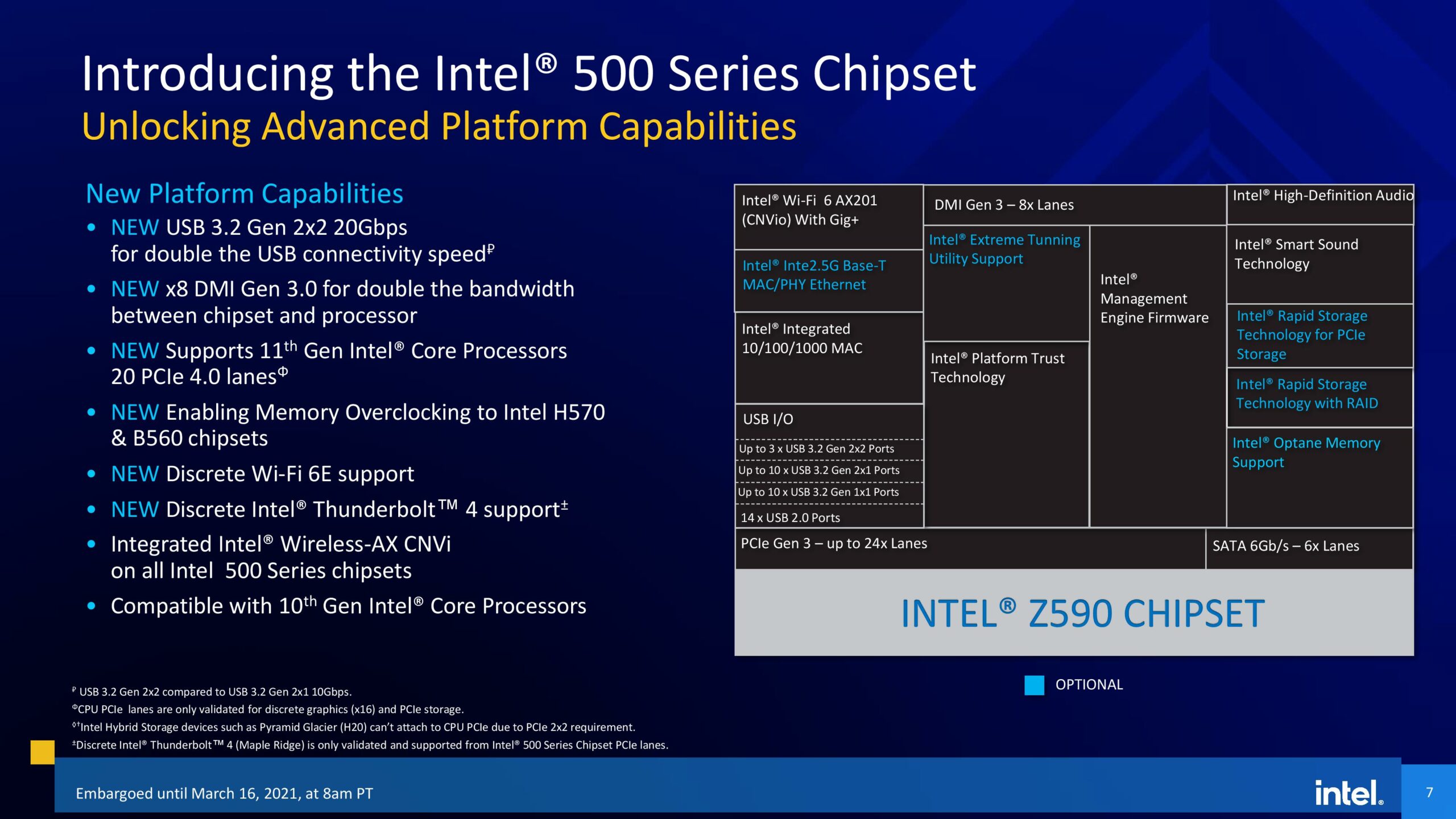 The Z590 chipset is the platform of choice for Intel's Rocket Lake processors (although the company is offering backwards compatibility with Z490 with a bios upgrade). USB 3.2 Gen 2x2 is supported along with x8 DMI Gen 3.0 for twice the bandwidth between the chipset and CPU. Memory overclocking is also enabled and WiFi 6E support along with Thunderbolt 4.0 Support is standard. It is worth noting that the Z590 motherboard will also support Intel 10th Generation processors. 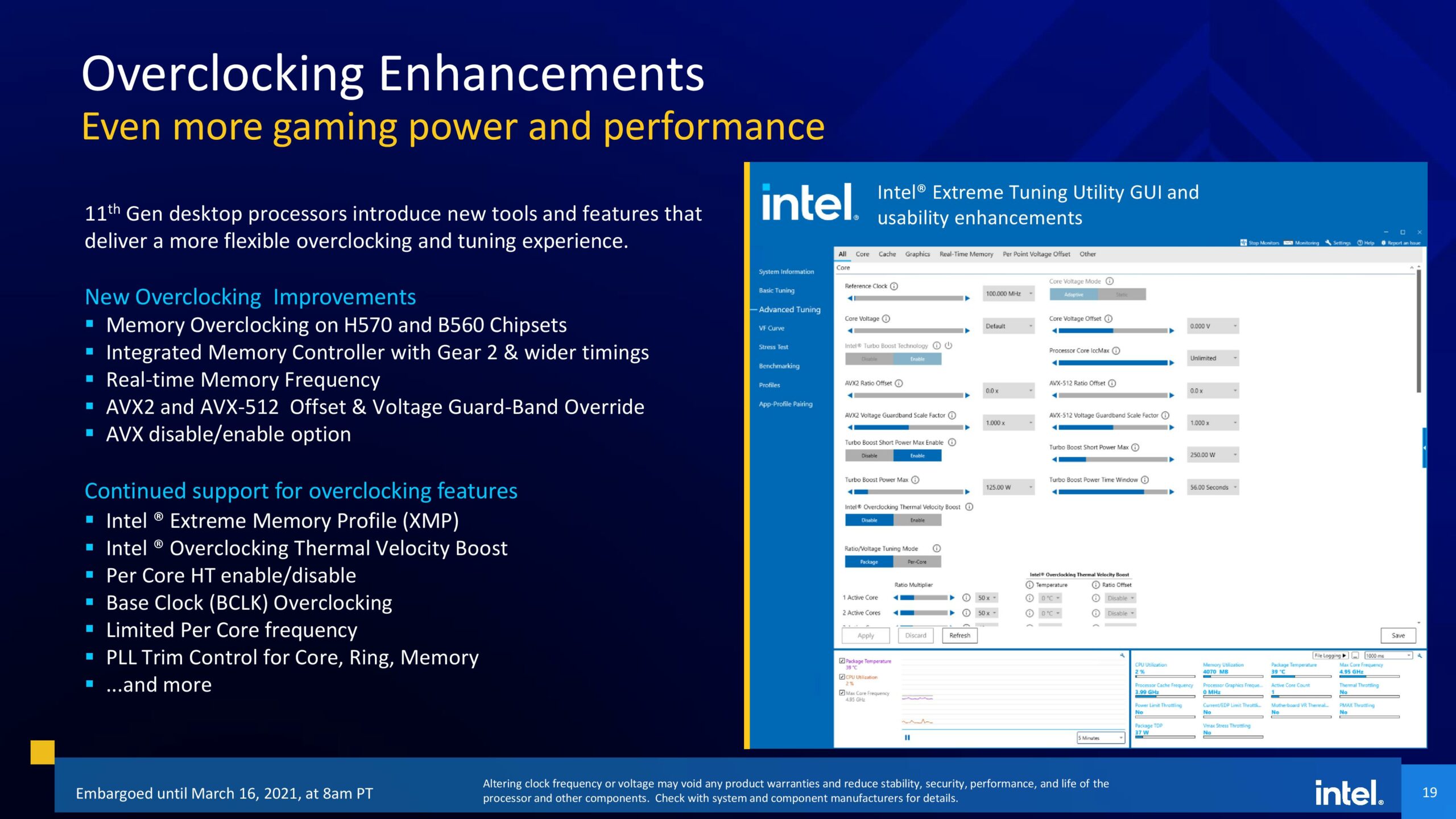 One of the features that Intel focused on this time were the overclocking enhancements made to the Intel Extreme Tuning Utility. It is now possible to change the memory frequency on the fly - along with the clock speed of the processor (which was previously possible). You can also turn off AVX should you want to if you are going for overclocking records. 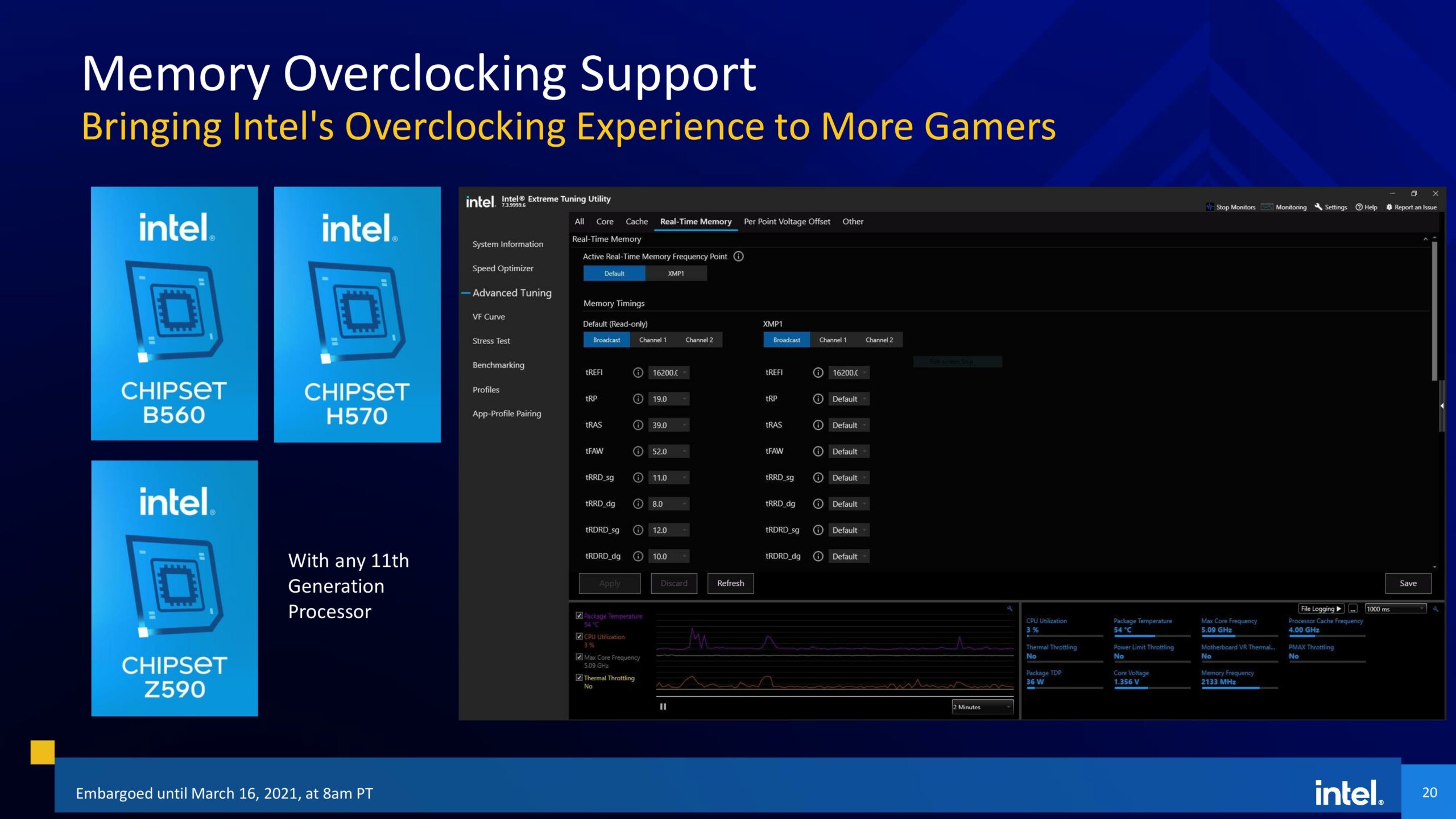 As always with first-party benchmarks: wait for third-party tests and take them with a grain of salt. That said, the results below are not surprising as games that rely on fewer threads will perform better on the Rocket Lake (we expect RKL flagship to beat AMD core for core, but lose out on overall gaming performance due to Zen's higher core count advantage). To be fair to Intel, they have gone straight for the jugular and tested 1080p performance instead of 4k (which would have normalized any difference) which increases the load on the CPU. On average the Core i9 11900K outperforms the older Core i9-10900K by 11%. 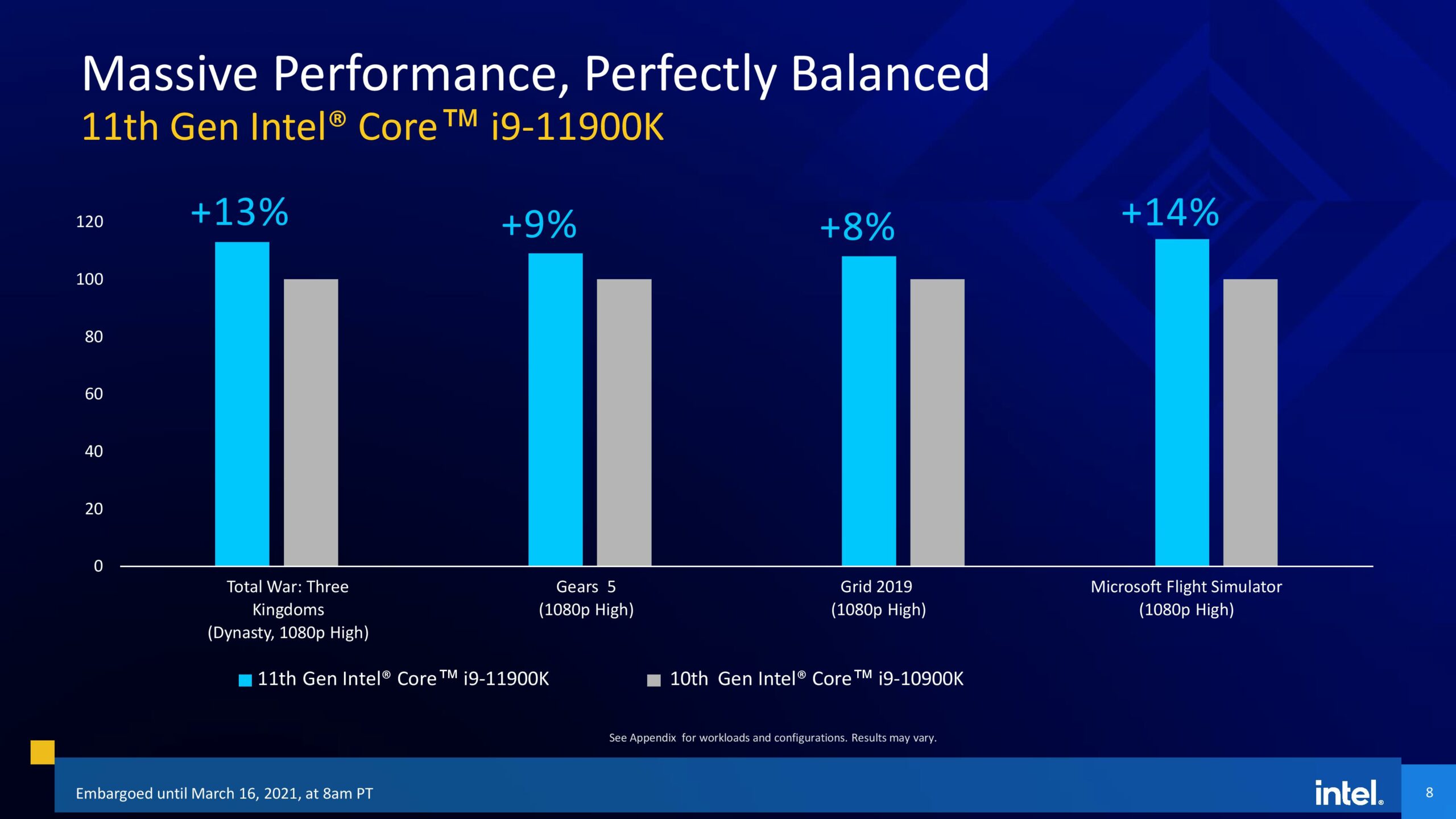 Up next, the company tested Rocket Lake against AMD's RX 5900X and it outperformed the latter by 7.5%. Considering this is at 1080p, you would see little to no difference on 4K gaming where the load is primarily on the GPU. 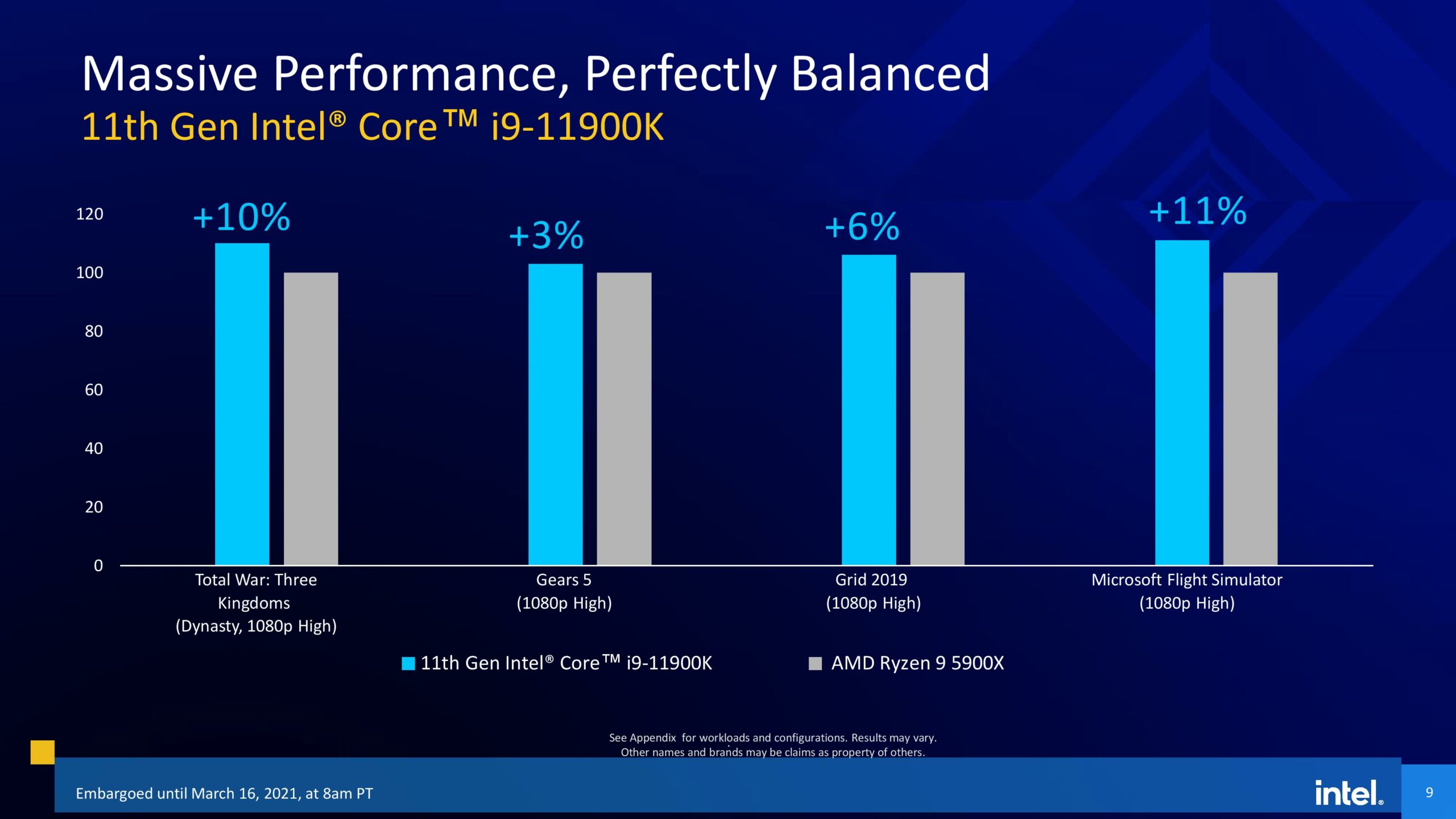 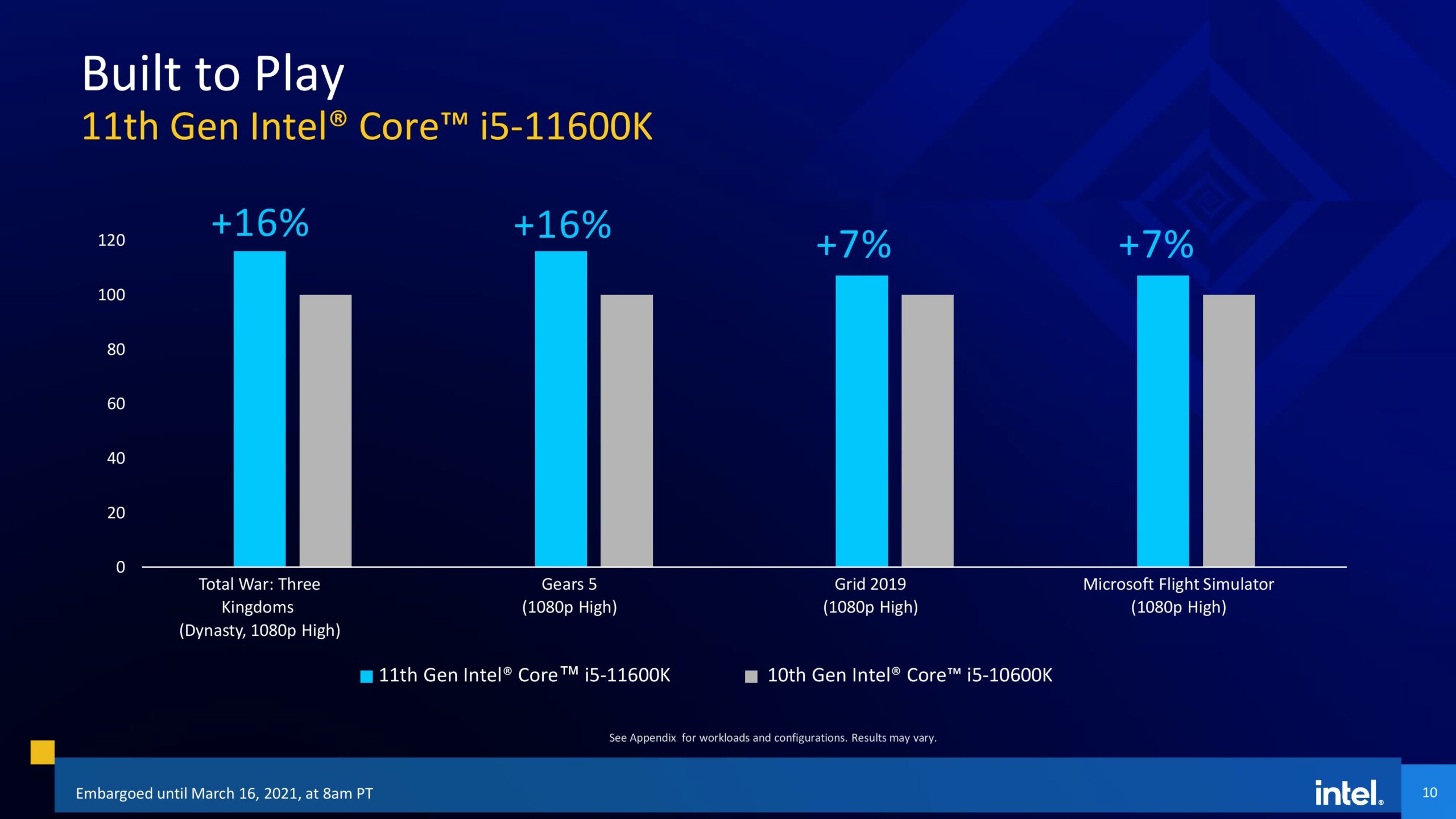 Intel has chosen a  fairly affordable pricing strategy. The flagship Core i9 11900K is available for purchase for only $539. Note: the KF series is essentially the same CPU without an iGPU. The KF variant is available for $513 USD or $64 per core. The AMD RX 5950X available on Amazon is currently priced at $1240 USD or $77 per core. Surprisingly, this is the maximum premium Intel is charging in this series with the rest of the options ridiculously cheap. The Core i7-11700F has a price tag of just $289 or $37 per core - which is extremely cheap. 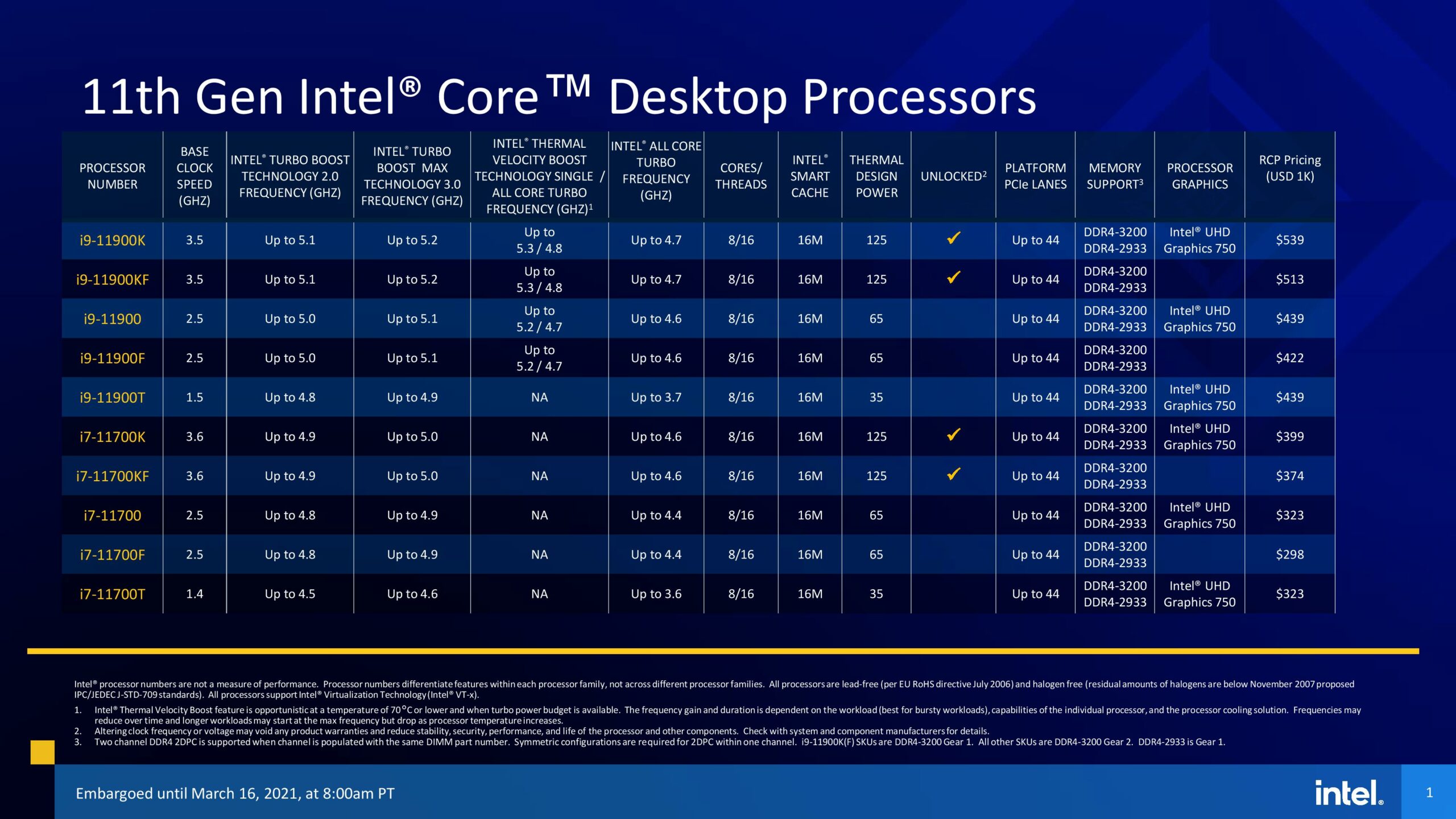 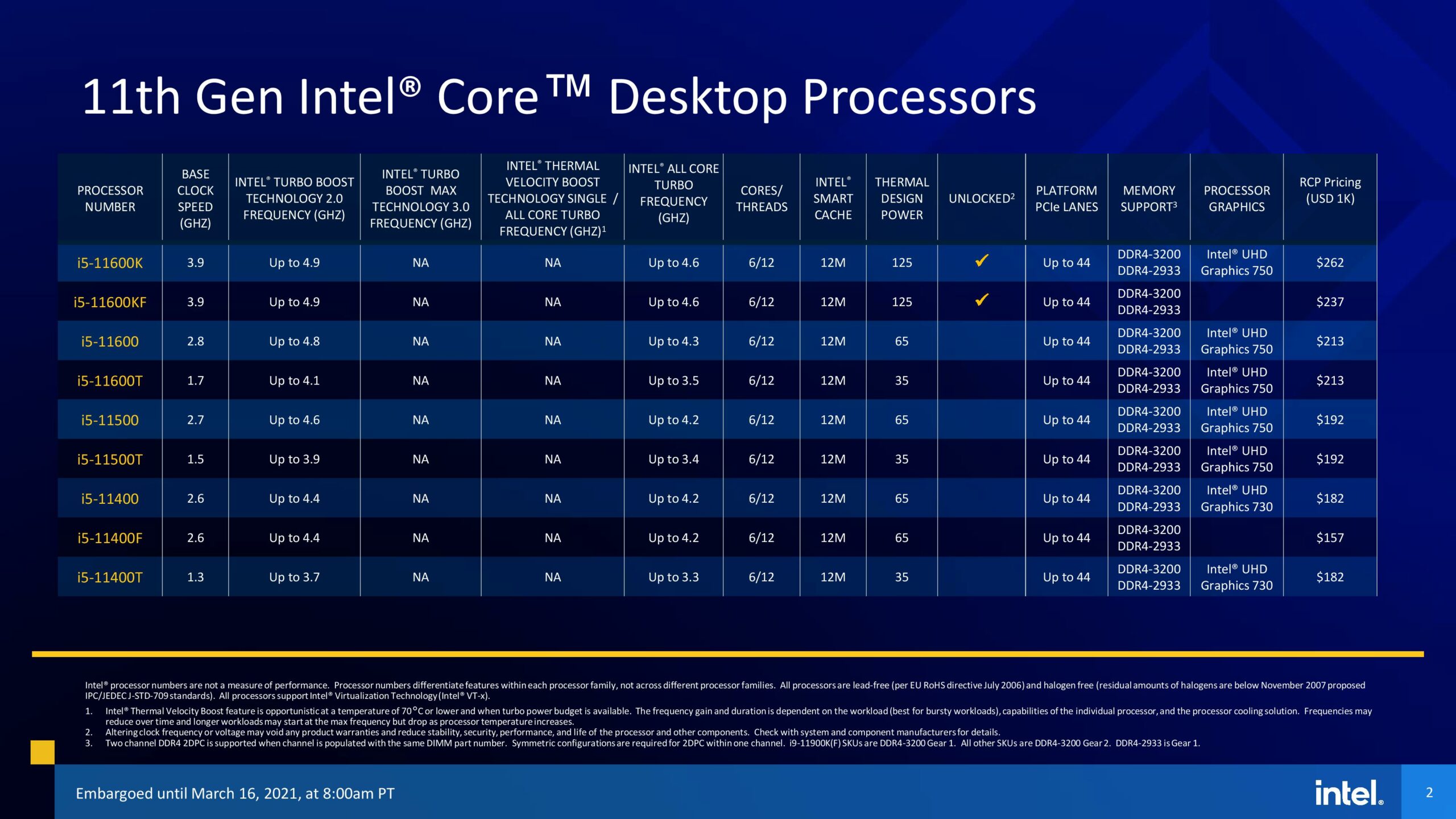 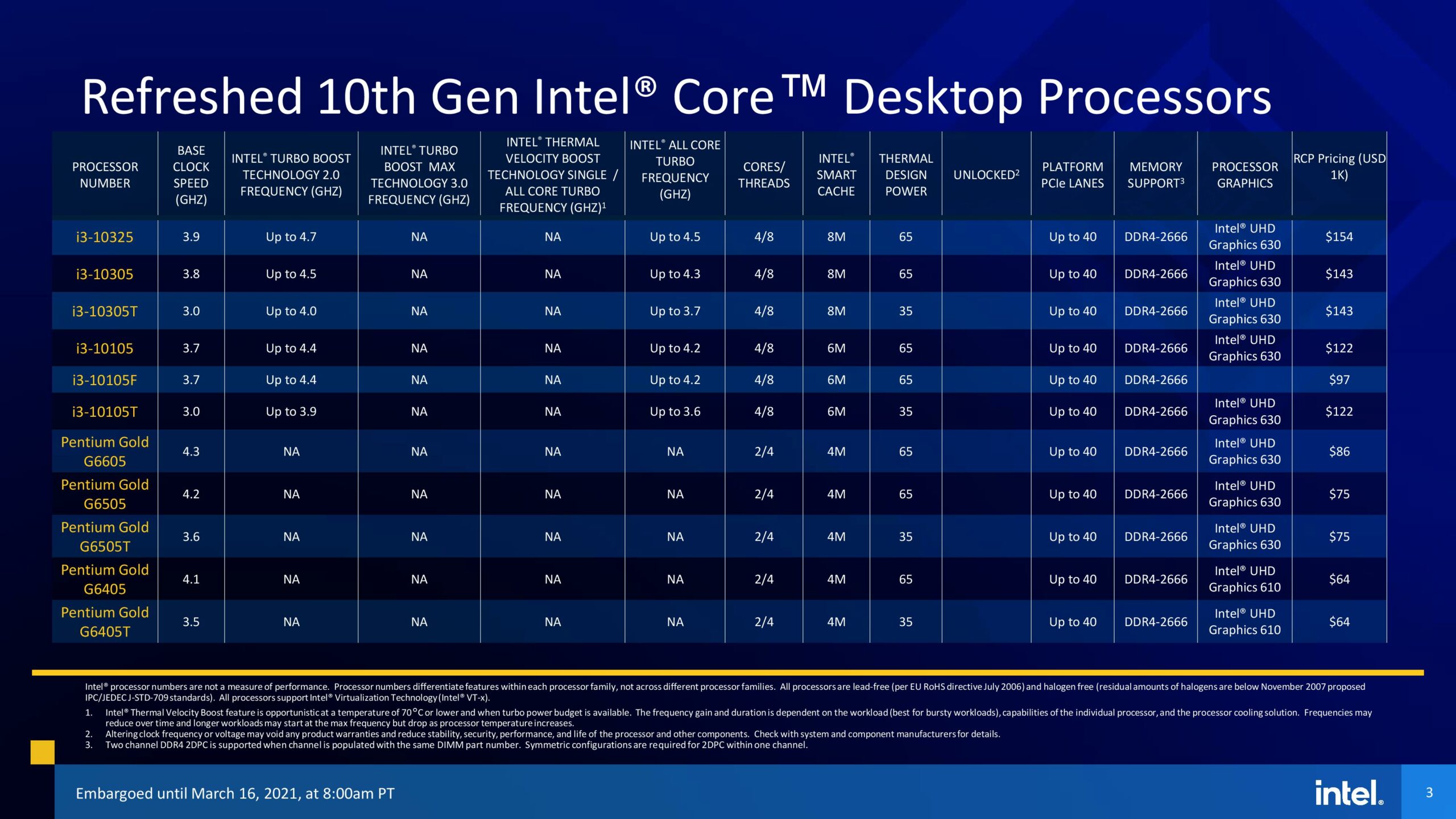 Here are my own 2 cents on Rocket Lake as well (caution: opinion): I think Rocket Lake could see Intel taking back market share from AMD simply because of the supply situation. With the primary bottleneck at TSMC severely limiting the supply of Zen 3 processors and driving up the average cost of SKUs, if Intel can ensure availability, a ready supply from their foundry (and considering this is 14nm it should not be a problem) close to MSRP then this is going to be a winner. Rocket Lake is designed to hold the fort till the company's 10nm ships in volume and it looks like it might succeed in doing just that - if not more.

The full presentation is given below: