The Intel Core i9-11900K is going to be Intel's flagship offering within the 11th Gen Rocket Lake Desktop CPU family. The CPU was tested against the AMD Ryzen 9 5950X which happens to be AMD's flagship for its Ryzen 5000 CPU family.

At #CES21 we looked at Rocket Lake-S gaming. Here’s a sneak peek of Core i9-11900K PCIe Gen 4 storage performance - up to 11% faster on PCMark 10 Quick System Drive Benchmark vs the 5950X. Thanks @Malventano for the data. Backup: https://t.co/LcI5n5Cok2 pic.twitter.com/NhblHRQJSC

For testing, a similar test suite was used which consisted of a Samsung 980 Pro (1 TB) NVMe SSD, 32 GB of DDR4-3200 MHz memory, the same software and OS versions, and an NVIDIA RTX 3090 graphics card. The Intel platform used a ROG Maximus XIII HERO motherboard while the AMD one featured the ROG Crosshair VIII HERO (Intel mistakenly wrote Rampage instead of Crosshair here). You can check the full system configurations used over here.

The performance was measured within the PCMark 10 Quick System drive benchmark and it is mentioned that both systems had drivers at 50% prefill. The Intel Rocket Lake Core i9-11900K CPU posted an 11% higher performance than the AMD Ryzen 9 5950X which shows that the Cypress Cove architecture and the 500-series platform itself have slightly better PCIe Gen 4 capabilities than the AMD platform. Now of course, since these results are from Intel themselves, we have to take them with a grain of salt and wait for independent tests/reviews which don't arrive till next month.

At the same time, we have had some independent test results leak out which show some massive PCIe Gen 4 storage performance numbers (although with Z490 motherboards, in the past that you can see here.

In addition to the Gen 4 performance benchmark, Intel's Rocket Lake Core i9-11900K has once again appeared within the CPU-z benchmark. The chip once again shows off its massive single-threaded performance capabilities by posting a score of 716 points in single-core & 6539 points within the multi-core tests. 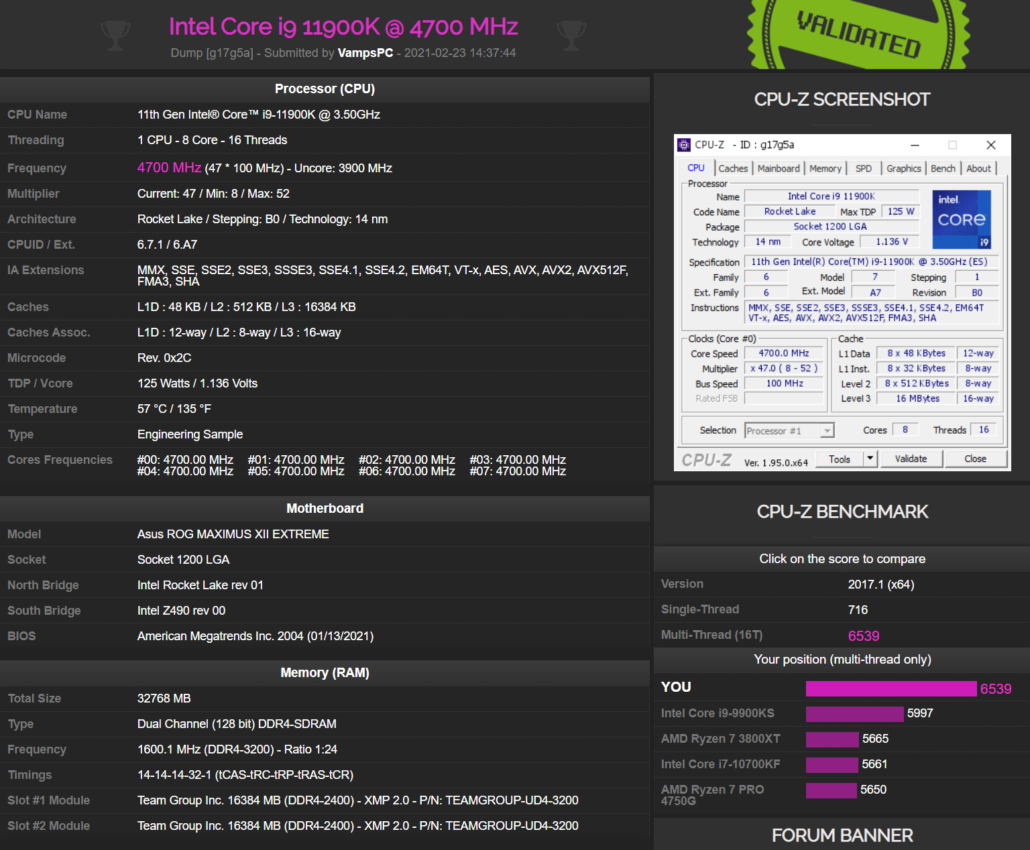 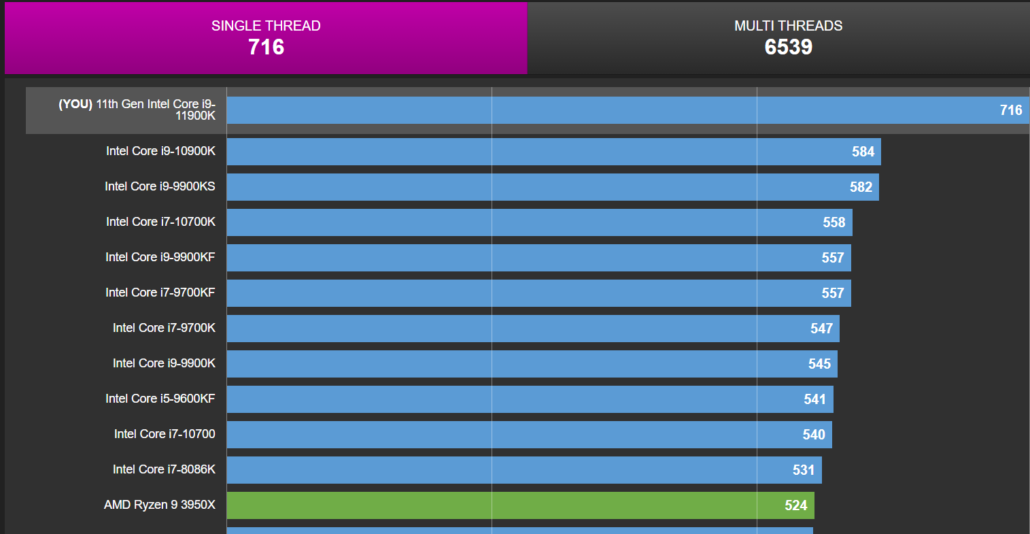 The performance benchmarks were carried out on the ASUS ROG Maximus XII Extreme-board with 32 GB of DDR4-3200 MHz memory. Do note that this result is completely at stock which means that the maximum single-core boost clock was maintained at either 5.2 GHz or 5.3 GHz (TVB 3.0) while the all-core boost was maintained at 4.8 GHz. This result puts the Core i9-11900K at 22% faster than the Core i9-10900K which is pretty impressive. The multi-threaded score is slightly slower than the Ryzen 7 5800X but right there with the Core i9-10900K which offers more cores and threads.

The same user also posted new benchmarks of the Intel Core i9-11900K Desktop CPU within the Geekbench 5/4/3 benchmark suites which you can see below. Once again, these results were done with the same configuration as listed above and at stock clocks.

The 11th Generation Intel Rocket Lake CPUs are planned for launch in March with a more recent rumor hinting at a hard launch with reviews on the 15th of March. Expect to see more information on the processors in the coming weeks along with pricing updates on when and where you can buy these chips for your 400 and 500-series motherboards.