Rising Chinese tech sensation Xiaomi looks very serious about grabbing the price/performance market with the announcement of its Redmi Note 2. The company will be shifting to produce its own custom cores in the near future, but for now, it is going to rely on Qualcomm and MediaTek to get things done. Coming to the company’s Redmi Note 2, the latest pricing leak shows that the upcoming handset, which is going to be powered by MediaTek’s powerful MT6795 SoC, is going to carry a price tag of just 699 Yuan, or $113 USD, when converted. Now that is a phenomenal price tag. 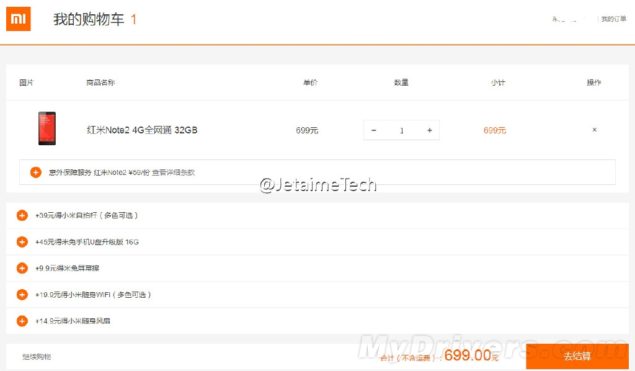 Redmi Note 2 Will Also Be Featuring A 4G Modem, Along With A 5.5 Inch Display Rendering A 1080p Resolution

According to the price leak originating all the way from China, it can clearly be seen that the device features the model name Redmi Note 2 and is going to sport a price tag of 699 Yuan, which is much less compared to the previous generation Redmi Note 2. While it is possible that Xiaomi plans to release two variants of the smartphone (one that will feature 1 GB of RAM with lesser amounts of internal storage), the initial price is phenomenal, assuming it ends up being true.

Moving on, MT6795, or in other words Helio X10, is going to be running an octa-core Cortex-A53 at 2.0 GHz, which is the same frequency of the processor running in Sony’s Xperia M5. While it might not be as powerful as a Snapdragon 810 or Exynos 7420, you will get more than your money’s worth with the powerful CPU running inside Redmi Note 2. Supplementing the processor will be 2 GB of RAM, and 32 GB of internal storage. For image capturing purposes, a 13/5 MP camera sensor combination will be present along with a fully functional 4G modem.

While there have been no details suggesting which frequencies the 4G modem will be running at, looks like we will eventually get to know in the near future during the handset’s announcement date, which is expected to be August 16. As stated before, if the pricing details end up being true, then we’ll have another affordable price/performance winner being rolled out by Xiaomi.