Previously, we reported that Xiaomi Redmi Note 2 had its specifications leaked, where it was stated that the handset was armed with MediaTek’s MT6795 SoC. Now, the latest benchmarks of the smartphone reveal that not only is Redmi Note 2 a very affordable handset, but it thrashes the remaining competition in the process as well.

The latest screenshots coming from Weibo show that Redmi Note 2 is able top against devices like OnePlus One and HTC One M9, which are incorporated with Snapdragon 801. Even though Snapdragon 801 is two generations old, the devices which are running the SoC are not cheap in comparison to Redmi Note 2. After all, Helio X10 present inside it is not supposed to be taken lightly. The mobile chipset is running eight Cortex-A53 cores running at a speed of 2.0 GHz.

Supplementing the performance of Helio X10 is 2 GB of LPDDR3 RAM. We suspect that if Xiaomi incorporated 3 GB of RAM inside Redmi Note 2, the score would have been much higher than the one presented in the image. Another thing that needs to be pointed out here is that this particular model features 16 GB of on-board storage. 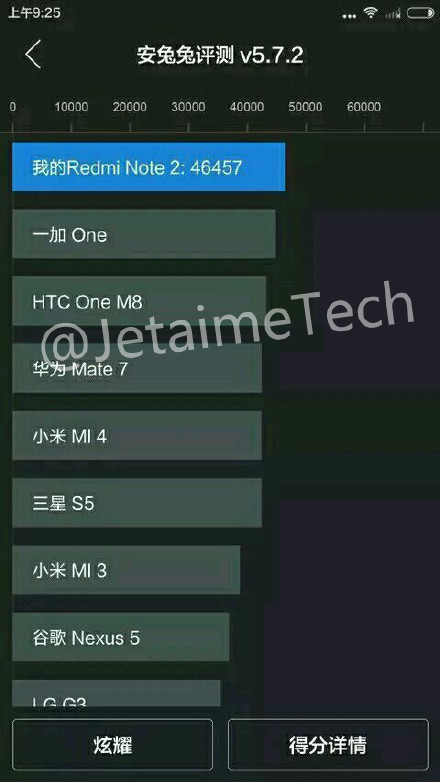 The 32 GB model features a clock speed of 2.2 GHz, meaning that if you were to invest a little more money on the affordable Redmi Note 2, the device will be able to obtain a much higher score compared to its lesser performing variant. The remaining specifications of both smartphones will remain constant between each other; a 5.5 inch screen size renders a resolution of 1080p and there are three variants that will be available to purchase for $125, $141, and $156. 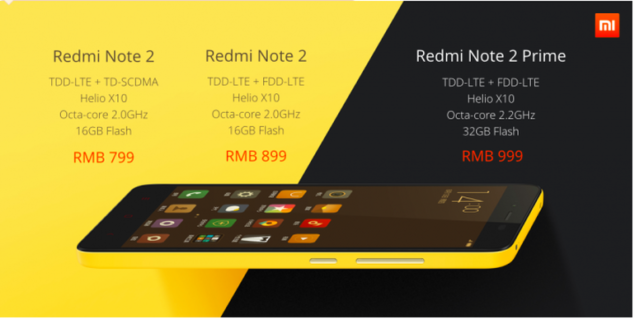 For a handset of this price, other OEMs should start evaluating the prices of their future handsets.