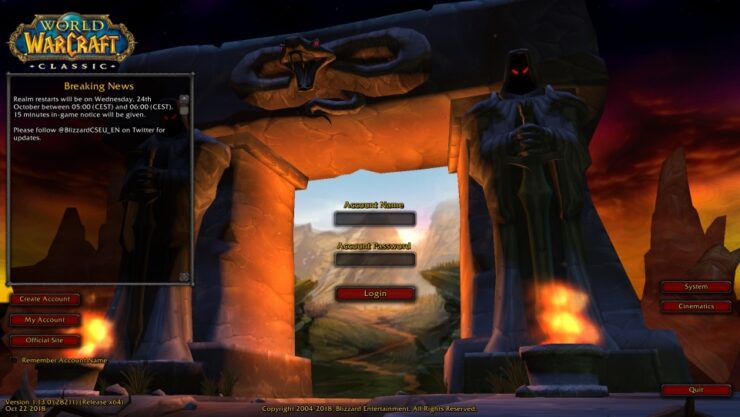 Blizzard has announced that the World of Warcraft Classic Demo can now be preloaded for holders of a Blizzcon 2018 Virtual Ticket.

Yesterday we covered additional details about the upcoming Classic Demo, including starting levels and zones, and Blizzard has now taken to the official forums with more information on the demo’s preload for those at home.

“We’re incredibly excited for you all to get your hands on the WoW Classic BlizzCon demo next week, and to help make things as smooth as possible, we’re making the client available to download for Virtual Ticket holders starting today”, community manager Ythisens writes.

“Over the next 24 hours, we’ll be enabling the ability to download the WoW Classic demo through the Battle.net app for players who have purchased the BlizzCon Virtual Ticket, as well as standard BlizzCon ticket holders who have added their Virtual Goodies code to their Battle.net account. If you don’t see the option to install the demo right away, don’t worry – you’ll still have plenty of time to download the client before the demo goes live during BlizzCon next week.”

Ythisens concludes, “we can’t wait for you to get a peek at what we’ve been working on, and hope you enjoy this preview of what’s to come!”

Blizzard announced its World of Warcraft Vanilla server option back at Blizzcon last year. Classic will use patch 1.12, Drums of War, as foundation for the game and Blizzard has said the original graphics and animations from 2004 are the starting point.