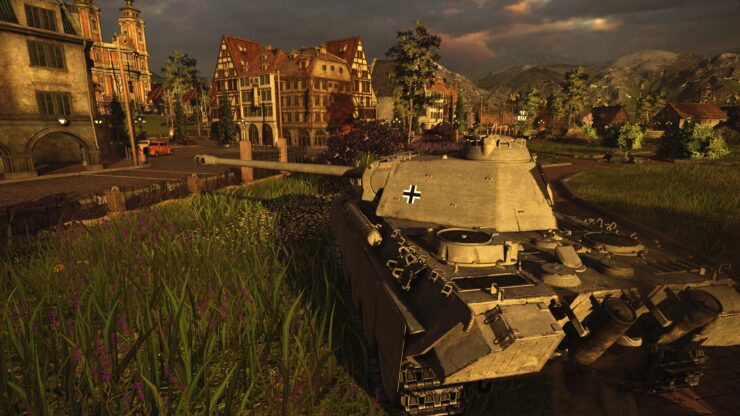 Wargaming revealed today that a new three-part story expansion titled 'Spoils of War' will be available for free today for World of Tanks on Xbox 360, Xbox One and PlayStation 4.

Over 14 million players in the world enjoy World of Tanks on consoles, according to the press release. They have participated in over 90 million tank battles, where over 44 billion shells have been fired and more than 4 billion tanks have been destroyed. The console version has received the exclusive War Stories content (currently unavailable on PC), which now amounts to over fifteen hours of free singleplayer and coop tank warfare in historical and alternate history settings.

Spoils of War is set in an alternate version of history where World War II never truly end. It will be divided as follows:

Chapter #1 - “Sieben Ritter”: a small town on the German-Polish border hopes to survive in
the crossfire for long enough to surrender to the Allies, but an incoming Soviet force may
extinguish any remaining hope. Will Captain Karl Staupe and his Sieben Ritter refuse to
answer the call to make a final stand in Berlin, and instead stay and fight to save the
otherwise doomed town? This chapter takes inspiration from the legendary 1952 Japanese
film Seven Samurai, which sees a band of rōnin — a samurai without a lord or master — fend
off a gang of bandits that seek to ravish a defenseless farming town.

Chapter #2 - “The Connoisser”: Sergeant Frank Martinez is tasked by the Allies with
destroying a cache of stolen art and priceless treasures. However, a band of German soldiers
has also set their sights on the treasure and taken it for themselves. Sergeant Martinez gives
chase, but can he succeed in recovering some of the world’s most sought-after treasures
before they’re lost to the pages of history? “Kunstschutz” was the German practice of
preserving art during times of conflict. The Allies saw this as looting. Not surprisingly, this
was a major point of contention during and after the war.

Final Chapter - “Potemkin”: The thrilling third act of the Spoils of War trilogy is set in a town
on the German front lines, where a Soviet artillery commander has been selling food on the
black market to keep his people from starving. The soviet high command has discovered the
dealings and scrambled an armored NKVD unit to restore order and bring justice. Captain
Anatoly Petrov, risking capture and punishment for defying his superiors, decides to rebel against Soviet high command and fight back. This chapter takes its name from the 1925
silent film Battleship Potemkin, which tells the story of the rebellious crew of a Russian
battleship.

Below you can find a gallery of screenshots and a gameplay video. In related World of Tanks news, Wargaming recently pushed 1.0 update on PC featuring a major graphics overhaul.

World of Tanks 1.0 Is Getting A Major Visual/Audio Overhaul and Redesigned Maps in 2018