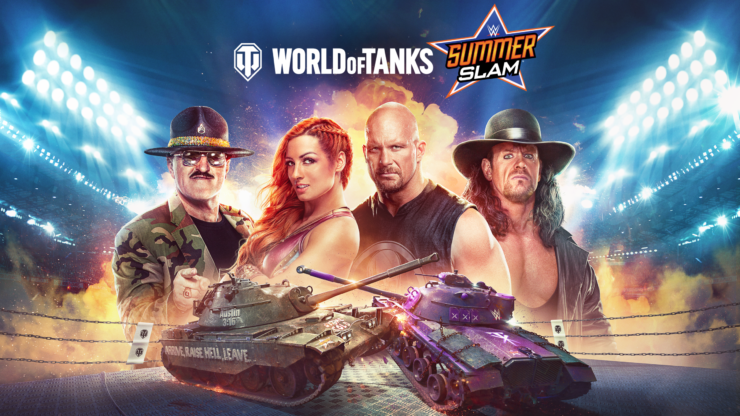 The newly announced 5.0 update for World of Tanks Console brings together some hotly anticipated new content along with the unexpected Austin 3:16 himself, among other Superstars.

World of Tanks Console's 5.0 update also marks the beginning of Season 1 SummerSlam. Running today through September 21st, SummerSlam adds an exclusive season pass featuring WWE-inspired tanks, Superstar collectible crews, new garages, and more. Included with the new season are five legendary Superstar Collectible Tanks that will be available for all players. These include The Undertaker, Becky Lynch, Andre the Giant, Sgt. Slaughter and Stone Cold Steve Austin. The Stone Cold stunner's tank will be available as a free livery for all players. This also includes a redesigned WWE Garage that will include Roman Reigns, Randy Savage, Roddy Piper, Ric Flair, and Shawn Michaels later on in August.

More importantly, Update 5.0 will introduce cross-play between the PlayStation 4 and Xbox One platforms. Unfortunately, there will be no cross-play between consoles and PC as the two versions of World of Tanks have some major fundamental differences in terms of tank upgrades, the lack of friendly fire on consoles, and a higher payout of silver and tank XP versus the PC version.

The Commander mode will also return, bringing a real-time strategy back to World of Tanks Console for those that missed the alternative mode. This limited-time mode lets players command a squad of nine tanks complete with infinite ammo reserves to take a new perspective on the battlefield with players able to issue commands either individually or together as a squad.

World of Tanks Console is available now for PlayStation 4 and Xbox One. Xbox 360 functionality will be phased out as the team prepares to release World of Tanks Console on both Xbox Series X and PlayStation 5. According to an article on WOT Express and translated from Russian to English, Maxim Chuvalov, Global Publishing Director for World of Tanks had this to say: " [B]y the time the PlayStation 5 and Xbox Series X launch, the game will not only be available in backward compatibility mode, but it will also be greatly transformed both externally and functionally."