This is the final section of the performance review and I will be switching back to the initial test bench to make a very stark point. Going against tradition, lets see the evidence first. 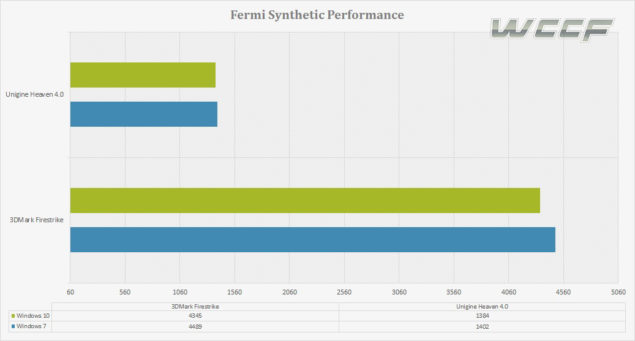 The first benchmark showcases the synthetic performance of the GTX 580 in two very well known benchmarks, namely Firestrike and Unigine Heaven 4.0. In both cases, the performance of the card falls after upgrading to Windows 10. I would also, at this point like to remind our readers that the TITAN-X suffered a similar fate in the previous section, which indicates a driver problem. Please also keep in mind that the API used for the GTX 580 in Windows 7 is the DirectX 11 API while in Windows 10, DXDIAG shows the API to be DX 11.2. 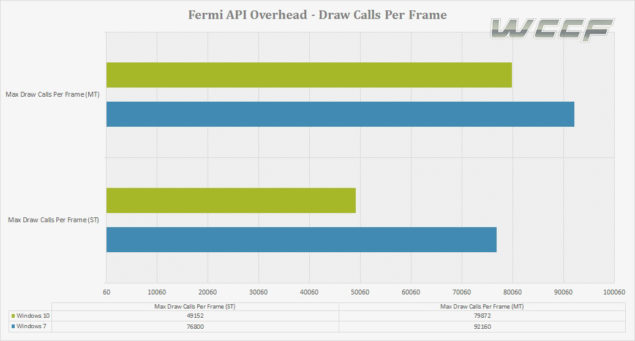 The second benchmark deals with the maximum DrawCalls allowed per frame by the API. Surprisingly, in the case of Windows 7, single threaded DX11 allows for a maximum of 76, 800 calls per frame while after Windows 10, it is only able to achieve 49,152 draw calls. Thats a reduction of 36% by upgrading to Windows 10. Next up we have the maximum Drawcalls executed per second: 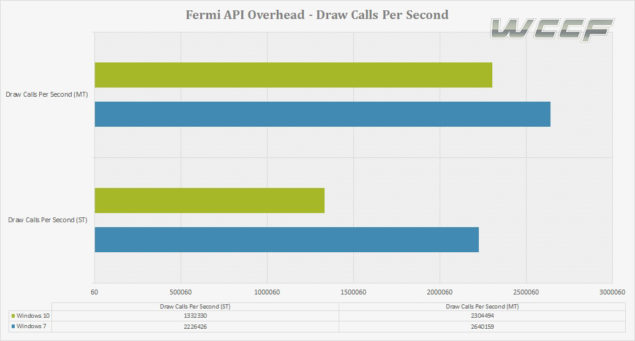 Once again we notice a huge difference between Windows 7 and Windows 10 - and its not higher on the later side. Fermi's performance more or less plummets in the Windows 10 OS, which seems somewhat counter intuitive considering the API was actually upped to DX11.2. The only problem with that reasoning is, that hardware is only as good as its driver support, and unfortunately for older cards, companies will not be interested in giving them the attention they deserve.

Nvidia had originally promised DX12 support for Maxwell, Kepler and Fermi - yet Fermi still has not received the DX12 patch that will allow it to finally feel at home in Windows 10. One can only hope however that problem will be resolved in a future update. This scenario should serve as a warning to any users with older Nvidia hardware who are thinking of migrating to Windows 10 immediately. The R9 290X we tested didn't have any such problem and we don't have any evidence to support that the same is true for AMD drives as well. Upon asking, Nvidia was not able to give us even a tentative date when asked about DX12 support for Fermi cards.