We previously reported that Microsoft is working on a new UI for the Action Center. At its Build conference in San Francisco, Microsoft has talked about the new capabilities for its Actions Center, including notification mirroring for Android. 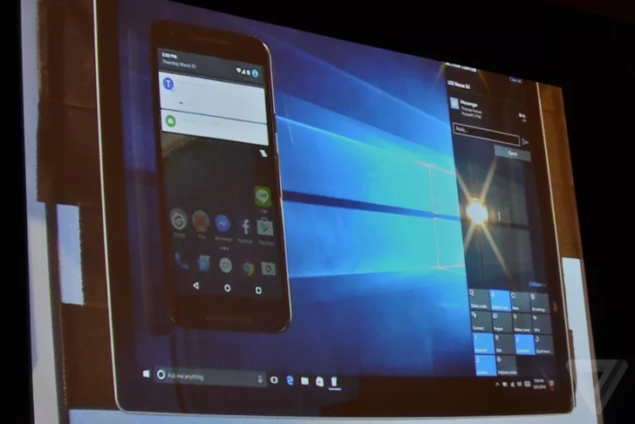 Windows 10 will bring Android notifications to your PC

Microsoft's Build conference is all about developers, but various capabilities that Microsoft details in front of the dev community bring the hope of some interesting future updates coming to the OS. Remember, when folks at Microsoft had claimed that some features will freak us out? After bringing the ability to build a chatbot to the masses, Microsoft is finally shifting its focus to Mobile. In its effort to turn its latest Windows operating system into a universal platform, Microsoft now plans to add notification mirroring support to Windows 10. This feature will not only work on Windows 10 Mobile, but will also be powered on the Android devices.

This improved and new Action Center UI will sync to the cloud, plugging Cortana notification mirroring into Android's notification listener, and then sending these to your Windows 10 PC. There already is a notification center in Windows 10, but it lacks for some very important features. While it's integrated to Windows 10 Mobile to some extent, Microsoft's mobile operating system just isn't used by many. Bringing the functionality to Android, the company will be able to offer the features to more users. Apart from notification mirroring, Windows 10 Action Center will also bring support for widget and tiles, allowing developers to offer rich information cards to users.

Microsoft is releasing an important Windows 10 Anniversary Update this summer. While the company didn't share the details of when exactly this Windows 10 notification mirroring for Android will be released, Anniversary Update seems like the right time. Cortana will also be updated to enable this functionality, and is expected to receive the update at the same time.

- How to Fix Windows 10 Start Menu and Cortana Issues