Windows 10 future updates will reportedly bring some big changes to the user interface of the Action Center. A new report claims that Microsoft is planning to replace the current static layout with more interactive card-style UI. The company will also be adding the ability to filter notifications in the Action Center. 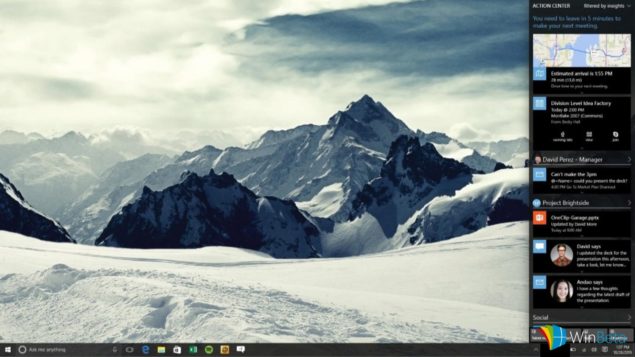 Action Center to be revamped in an upcoming Redstone update

With the Build developer conference starting this Wednesday, we have been getting a number of reports and rumors trying to give us a glimpse of what new features we could be seeing at the event. Since both the Windows 10 for PC and Windows 10 Mobile have been released to the consumers, Microsoft has shifted its focus to better integration between the desktop and the mobile OS. From a "Pick up where I left off" feature to improvements to its Messaging apps, we have seen the company working on better syncing between the devices.

Now, a new report claims that along with syncing mobile and desktop devices, Microsoft will also introduce new UI to Windows 10 Action Center. This new Card-based user interface will bring more actions for notifications in the Action Center, giving users the ability to filter notifications based on social apps or insights.

The goal here is that more areas of the system will share a common set of shared actions that can be accessed in more ways than one. Cortana will talk to the Action Center more and vice-versa, offering personalized content cards meaning you'll never miss an appointment or notification. Sources also say Microsoft is toying with bringing filters to the Action Center, which would give the user a choice between notifications filtered by insights, for example. This would allow notifications to be grouped under certain app types, making it easy to organize what notifications you want to see.

App developers will also be able to update their apps to support the new actions and filters.

1st and 3rd party apps will be able to tap into the Card UI, offering their own information and actions based on each individual app.

The images shared in the report reveal a concept designed by the company. The new Card UI brings a modern interface to the Action Center and will reportedly appear in Cortana too, "creating a sense of familiarity." There is no word when will these changes make it to Windows 10.

Microsoft is expected to introduce several new features and improvements with the Windows 10 Redstone release. Improvements to Cortana, better app syncing (including an Apple's Handoff-like feature), extensions for Edge, and a bunch of other feature enhancements are part of the second wave of updates that will be released to the operating system later in the year. Microsoft will be talking about the above and more features at its Build conference this week.