"It's raining Windows 10," said no one ever but it won't be wrong anyway. Another Windows 10 build is here with us bringing some 300 bug fixes - well, yes!

Microsoft has released Windows 10 10159 PC preview build just a day after Redmond released 10158 to the users of the Windows Insider program. Only a month away from the official launch of Windows 10 on July 29, it is no surprise that the latest build carries over 300 bug fixes as compared to the previous version. Company had claimed that the build will carry an unknown special new addition along with the bug fixes.

According to reports, the latest Windows version contains a new desktop background which appears to be the default image for Windows 10. We aren't sure if this could be the awaited new addition? While today's Windows 10 10159 only brings bug fixes, yesterday's 10158 was heavy on new features. Here are the new changes that Microsoft has brought in with various latest Windows 10 builds.

As we had shared with you earlier, Microsoft's new Edge browser is now branding itself inside the operating system; you can read more about it here. There have been several fixes to both the Surface 3 and Surface Pro 3 along with the new desktop image shared below. The latest Windows 10 builds have also brought in various more improvements to Cortana including new themes and integration with Office 365. Insider Hub is also removed, however, you can reinstall it. Phone App support and Android subsystem code have also been some other highlights of the latest Windows 10 PC preview builds. 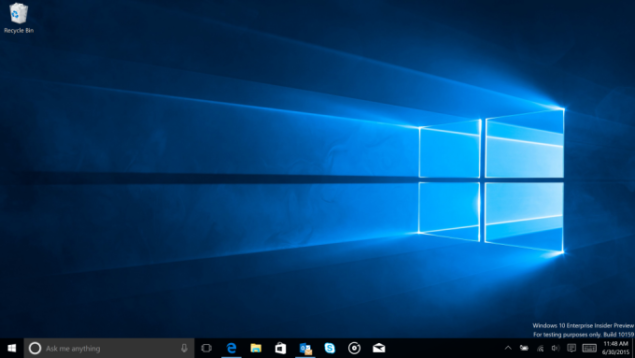 Fast ring members of the Windows Insider program can test the features of Windows 10 10159 build on Windows Update. Not sure when the frequency of Windows 10 builds is going to slow down but we are certainly looking forward to all the new features that keep coming out. Remember, Microsoft is now increasingly focusing on bug fixes and stability so juicy features would be but a few in the coming days.