Microsoft on Track to Launch Windows 10 on July 29 – Reports

Microsoft is reportedly going through the last phase of Windows 10 development, wrapping it up for the summer release. We have already seen many preview builds of the OS giving users some idea of what to expect from the upcoming OS. Earlier in April, AMD CEO Lisa Su revealed that Microsoft will launch Windows 10 in July, however, we haven't seen any official confirmation coming from Redmond. 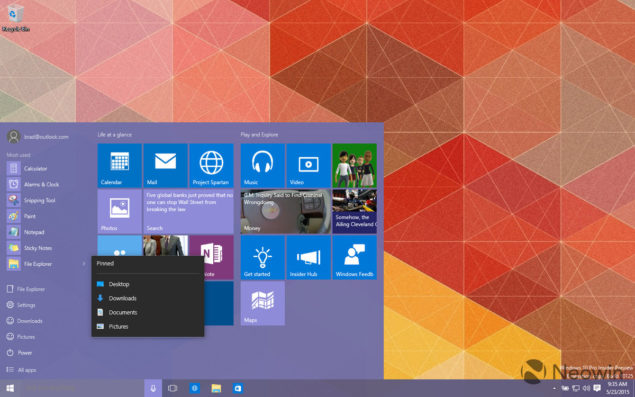 A new report confirms that the company is indeed finalising and polishing Windows 10 to have it ready and bug-free for a July launch. The Verge reports that Microsoft is targeting a late July release and is on track. While the site refers to sources who are familiar with the matter, Su's statement and some other reports including WZor's "confirmed for July 2015" also indicate that Microsoft's plans of summer release are going well.

"We understand that July 29th was one of a few target dates discussed, and that the company is trying to finalize the code (release to manufacturing) by the end of June."

Microsoft so far hasn't promised any date except that the Windows 10 release date will be in "this summer." Followers believe that the company has still a long way to go to polish and tweak the Windows to perfection. While the OS wasn't in a good condition when Su's statement came out, last preview 10122 build showed quite a many transformations and bug fixes. Another leaked preview also confirmed many new UI related changes and some fine tuning of the Settings in the tablet OS.

The operating system is still in no way ready for the end-user as Insider Previews haven't really worked perfectly. It is quite normal for testers to get bug-filled releases but users won't appreciate it. If Microsoft really wants to have Windows 10 release happen in July, folks there are going to spend this June being busy fixing various bugs.

Microsoft is offering Windows 10 as a free update to Windows 7 and Windows 8 users. The update would also be available to Vista users but not for free. Users are expecting the company to launch the OS that is more inclined to desktops somewhat similar to Windows 7. However, Microsoft seems to present something that is balanced for both the traditional mouse and keyboard computing devices and the more latest touch screen-based mobile devices.