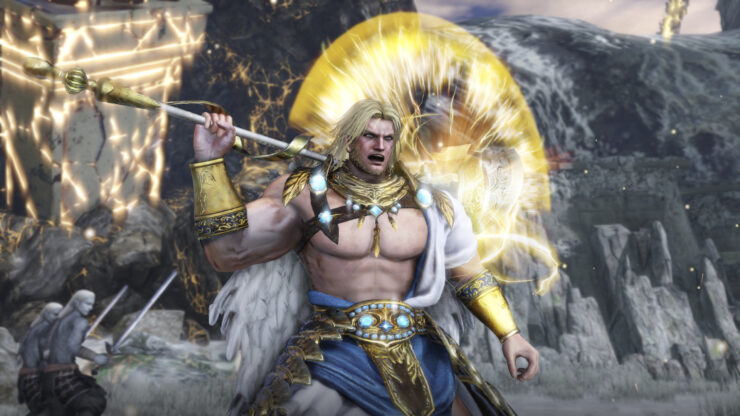 In the last few weeks before the American/European launch of Warriors Orochi 4, we had the opportunity to talk with Masaki Furusawa, Producer on the project, about the new characters and some of the newer mechanical changes that players can see for themselves very soon.

Before we started our brief interview for Warriors Orochi 4, the series producer Masaki Furusawa wanted to show off a bit of the new mechanics and characters, which you can see in the gameplay footage below, captured on PlayStation 4 as we conducted our interview. As a reminder, Warriors Orochi 4 will be out on October 16th for PlayStation 4, Xbox One, Nintendo Switch, and PC.

One of the new characters that we want to show [in Warriors Orochi 4] is Ares. The weapon that he uses is a dragon that can change forms with a very simple operation.

Is [the Dragon transformation] his Charge Attack?

Yes, yes. And by using magic, he can ride his dragon as a mount and fight as he rides.

Even though Ares is already a god, does he use the new Deification Power from Warriors Orochi 4?

He doesn’t change, but throughout the battle, he can use the Rage abilities.

I have noticed that players will have different Rage abilities, depending on if they are originally from Dynasty Warriors or Samurai Warriors.

That is true. It changes based upon the base game. The new characters are closer to Dynasty Warriors actions.

In the previous Warriors Orochi titles, characters were separated into various types and one of them was Wonder. What replaced Wonder since I do not see that as a character type?

In previous Warriors Orochi games, there were four types and we narrowed it down to three: Power, Technique, and Speed. Although the number became smaller, each element has very unique characteristics that can be more understandable to the player.

One of the biggest upgrades to Warriors Orochi 4 are the Sacred Treasures. Can you talk about that system?

This time, our keyword [for Warriors Orochi 4] is ‘Gods’. Using the power of each god, that is in the form of Sacred Treasures (Mjölnir is one of them). With the power given by the gods, you can perform different actions. There are sixteen Sacred Treasures and each character is assigned a specific Sacred Treasure.

So there is no way to give a character a different Sacred Treasure later on?

That’s right. This time, we did not make it possible. Between Basic Actions and the Sacred Treasures, we wanted players to combine these two and have fun as a set.

Talking about the weapons, each character’s final weapon was known as a Mystic Weapon [in previous Warriors Orochi games]. Is there a similar system for Warriors Orochi 4?

Are you talking about hidden weapons?

Yes, such as if you play a specific character in one stage and earn 600 kills in 10 minutes, for example.

Yes, there are similar things available. After you reach the ending, there will be more to play.

It sounds like there will be a lot if you wanted to complete every character. That’s at least 160 weapons you’ll have to unlock.

That’s right. It’s possible that players can collect weapons again and continue to enjoy the game.

I’ve noticed that some characters will have different weapons from previous iterations. One such character is Lianshi, who used a crossbow in most games but recently switched to the Mandarin hookblades.

Yes, that is something that is different. Between Dynasty Warriors 7 original and Empires, the weapons were switched and adjustments were made to something newer.

Will Warriors Orochi 4 have different difficulty levels for each stage?

That’s right. You can pick a stage and lower the difficulty if it is too hard.

Can you earn better weapons or different items on a higher difficulty?

Yes. Depending on the difficulty level and the more challenging a stage is, you can earn more powerful weapons.

Does Warriors Orochi 4 have different mounts that you can equip, such as Red Hare for Lu Bu?

Yes, there are also Pegasus and Unicorn. We prepared those as a pre-order bonus. Other than those, there’s Downloadable Content that includes something new and something different.

Can you ride a panda?

It’s not contained in the Season Pass, but with some of the mounts like the Panda that were available in previous games, we are thinking of reviving those.

So maybe we can once again play as Meng Huo and ride an elephant?

[Laughs] Yes, those are Downloadable Content, so please expect to have them available.

I wanted to ask about the online play for Warriors Orochi 4. Will you be able to play the entire campaign from beginning to end with a friend?

It’s possible to play the story mode with a friend.

Do you have to finish a stage before you can play it online with a friend?

Yes, for each stage, you choose to play by yourself or with a friend. Afterward, you can choose to play the same characters. But you cannot start from the middle of a stage.

I know that from before, you had to finish a stage and then come back before the online play was unlocked.

That is still the same, so you will have to complete the stage by yourself before you can play together.

There will be two versions of Nezha.