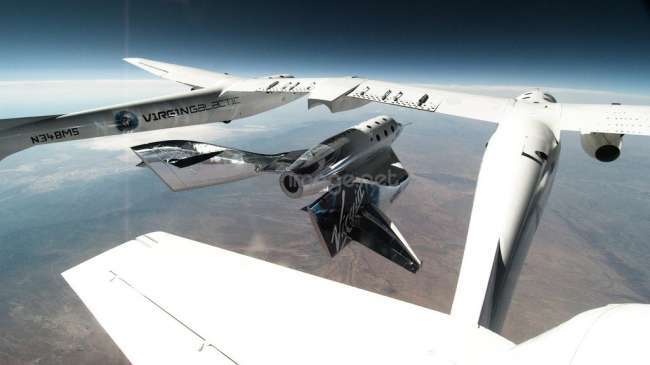 On the 1st of May, Virgin Galactic had made history by conducting the first test flight of SpaceShipTwo – the latest iteration of the company’s suborbital spaceplane – from its New Mexico Spaceport. That test also marked the first free flight for the VSS Unity and served to quantify the performance through a number of metrics, including pilot proficiency training and testing of ground operations.

Today’s test, on the other hand, constituted a high-speed glide that allowed Virgin Galactic to gauge the resilience of its systems and the performance of the vehicle prior to the initiation of rocket-powered test flights.

“Flying VSS Unity in glide configuration at higher speeds enables certain vehicle systems to operate close to the environment seen during phases of rocket boost on a spaceflight. The spaceship achieved a glide speed of Mach 0.85 after being released from the mothership VMS Eve at an altitude of 51,000 ft. Unity completed multiple test-points before touching back down smoothly for a runway landing at Spaceport America.”

After an extensive data review of today’s test flight, the Virgin Galactic team will have to complete several steps before the next stage of testing, comprising of powered test flights. These steps include “final modifications to the spaceship customer cabin and detailed inspections of the vehicle and systems”.

George Whitesides, CEO of Virgin Galactic and The Spaceship Company said on the occasion:

“I am thrilled with the team’s hard work to complete today’s test flight successfully. It was an important test that, pending data review, means we can now start preparing the vehicles for powered flight. Our focus for this year remains unchanged on ensuring the vehicles and our operations are prepared for long-term, regular commercial spaceflight service.”

Of course, today’s development follows another milestone that Virgin Galactic achieved earlier this week. According to a statement released on the 22nd of June, Virgin Galactic has concluded a “Space Act Agreement” with NASA’s Johnson Space Center, the Houston-based facility that leads the agency’s astronaut program. Though the precise specifications of the agreement are scarce at the moment, the partnership will allow Virgin Galactic to identify private candidates interested in purchasing private mission slots to the International Space Station (ISS), assist in transporting resources to the ISS, and provide on-orbit as well as ground resources to NASA’s ISS missions.

Bear in mind that Virgin Galactic has already developed a tailor-made ‘Future Astronaut Readiness program’ for its customers that would fly out of the Spaceport America in New Mexico – the company’s premier facility. The program is intended to familiarize customers with conditions in space, including the effects of zero gravity as well as the high G-forces that are encountered during spaceflights.

As per the latest data, the company currently has 603 space flight reservations, with each ticket having been sold for between $200,000 to $250,000. Branson’s spaceflight enterprise has yet to undertake its maiden commercial launch.

Investors have reacted euphorically to the successful completion of the latest iteration of testing. As an illustration, Virgin Galactic’s shares are up 4.59 percent or $0.7 to $15.95 in the after-hours trading, as of 04:57 p.m. ET. Since hitting a year-to-date low of $10.49 on the 19th of March, the stock has rebounded, generating gains of 52 percent based on the current after-market price level. Virgin Galactic currently has a market cap of $3.21 billion.