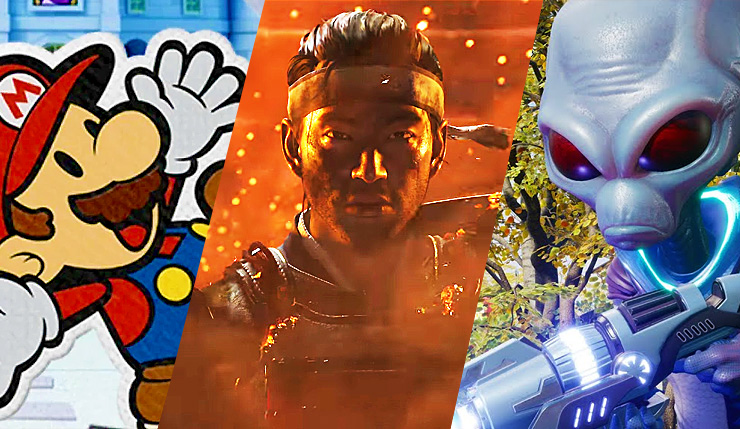 Following a few months without a lot to play due to the COVID-19 pandemic, things are set to pick up in a fairly serious way in July. Major games like Ghost of Tsushima and Paper Mario: The Origami King are on the way, but there’s also a good number of mid-sized titles like Trackmania, Destroy All Humans!, Deadly Premonition 2, and Marvel’s Iron Man VR to look forward to. Meanwhile, on the indie front, players will be able to tackle the 8-bit Castlevania tribute Bloodstained: Curse of the Moon 2, unique base-defense game Drake Hollow, and more!

That said, here are the games you should be looking out for in July…

Ubisoft’s build-your-own racing series returns to its roots following a series of more over-the-top entries with an HD remake of the fan-favorite Trackmania Nations. This new version of the game is simply called Trackmania, and promises new online features and regular “live service” content updates. Trackmania will be free-to-play, although you’ll need to pay a subscription fee to get full access to game’s track creation features. Wccftech’s Chris Wray criticized the monetization scheme in his review, but hopefully the game increases in value as more user-created content is made. You can pre-order the game here.

Deadly Premonition was the very rare case of a “so bad/odd it’s good” video game, and now it’s cult of hardcore fans get another slice of weirdness in Deadly Premonition 2: A Blessing in Disguise. Agent York is back and has another twisted mystery to solve as well as plenty of quirky side activities to engage in, including bowling, skateboarding, and more. Can Deadly Premonition 2 bottle the same quirky charm as the original? I have a premonition the game might just pull it off! Pre-order via GameStop.

EA enters the crowded hero shooter market with the new 3v3 multiplayer romp, Rocket Arena. As the game’s name implies, Rocket Arena’s characters cast aside traditional guns in order to do battle with a variety of different rockets. Contrary to what you might expect, Rocket Arena is not doing the free-to-play thing – it will cost $30, with additional monetization via battle passes and cosmetics. The game definitely looks more colorful and interesting than some other recent hero shooters, so hopefully it’s explosive action finds an audience. You can pre-order the game here.

Sucker Punch Productions’ long-in-development Ghost of Tsushima finally arrives in July! The game casts players as Jin Sakai, a samurai who must slowly shed his code of honor and become something closer to a ninja as he fights back against an overwhelming Mongol invasion. Featuring a large open-world to explore and challenging combat, Tsushima looks like a promising mix between Breath of the Wild, Dark Souls, and Ubisoft open-world titles. This will likely be Sony’s last major PS4 exclusive, so hopefully they’re going out with a bang! Pre-order via GameStop.

Paper Mario is back, and it seems like he’s returning to his roots. Paper Mario: The Origami King features the return of things that have been sorely missing from more recent entries in the series, including unique NPCs and support characters, and more in-depth RPG-style battles. Could this be the true Paper Mario: The Thousand Year Door we’ve been waiting for? Or will fans’ hearts be crumpled yet again? Let’s hope it’s the former! Pre-order via GameStop.

Drake Hollow is a stylish new base-defense game, with an interesting twist. In order to survive, you’ll need the help of “Drakes,” strange plant people you have to feed and entertain (they can literally die of boredom). There’s also an exploration element to the game, as you’ll visit different regions (your base can be transported with you) and experience different seasons. This one is definitely an interesting mashup of ideas and genres. Here’s the Steam page for Drake Hollow.

Inspired by Scandinavian legends, Roki casts players as Tove, a young girl on a mission to save her family. Roki features simple, yet charming visuals that do a good job of setting a proper otherworldly tone. Developer Polygon Treehouse is promising intuitive, accessible puzzles that should test your grey matter without excluding anyone from the fun. This icy adventure may be just the refreshment you need this summer!  Here’s the Steam page for Roki.

And those are the games you should be keeping an eye on this coming month. What games are you planning to pick up in July? Did I miss anything you’re looking forward to?