When I previewed Trackmania just one month ago, I mentioned that the version of the game I got to play made it clear to me that I'm terrible at racing games. Specifically, it made it clear that I am pretty damn rubbish at this racing game, with it offering multiple challenges of speed, control, obstacles and more that results in it being more a method of memorisation than skill. At least that's how I perceive the game. The question is, though, is it fun?

I spent a lot of time crashing and restarting. A lot. Whatever I'll say doesn't do justice to the amount of time I spent failing and I don't cover much about the many user-created tracks I've raced on. Some I'm sure were designed more to frustrate than to give any sense of achievement, but that's by the by.

I do get a sense of achievement from Trackmania. The game hooks right into the "one more turn" feeling that can make any game truly addictive. Even though I'm consistently getting frustrated to the point of exasperation, I still can't help but keep having another go, another restart. That's where the game gets me, each track can be anything from thirty seconds to a minute and a half long (longer if you look at user-created tracks) so a restart, while frustrating, isn't too far away. For other people, they'll be having that one-more-go to chip away, trying to raise their rank in the leaderboards.

However, this doesn't leave me without some genuine issues with the game. For what is a very arcadey racing game, particularly when you look at what can be created by users, it is way too rigid. I'll fully accept that my failings on a corner, my lack of control, my crashing into an obstruction is just part of the game. What I don't like is that a game that almost promotes the use of shortcuts through allowing the creation of multiple paths, forces you to go through some poorly placed checkpoints to ensure you complete a map.

Case in point is track 23 of the current summer collection, the one shown at the end of my gameplay footage. The checkpoint as you go up the ramp took me over fifty times to get through and land right. After so many track or checkpoint restarts, I've spent anywhere between thirty to forty minutes on that track and, something that surprised me more than I ever thought it should, I eventually had a great run and got a gold medal with a time of 50.229 seconds.

With user-created tracks - more on those later - I can accept some horrible placements of checkpoints, jumps and obstacles. I've gone into some user-created tracks expecting them to be there simply to grief or be near-on impossible for us average mortals. Tracks by Ubisoft Nadeo? I wouldn't have thought so. Still, I managed it eventually, so what am I taking umbrage with? I'd say the learning curve.

Yeah, that's likely the biggest bugbear I have with Trackmania. I haven't truly jumped into a Trackmania game in over a decade. Turbo, a few races on a friends copy of the game. Even having played a limited version for my preview, it still took me some getting used to the older boosts and obstacles. The game still throws me off, even now, when it transitions into a first-person mode. The tutorial is way too thin on the ground, nothing is actually explained and this is something that permeates throughout every aspect of the game.

Still, this has always been a problem and to an extent, I think it's something the community likes. Personally, I want the fundamental mechanics of your vehicle and how different things work explained to me. This is particularly true when it comes to the number of boosts and obstacles, including the surface of a track, found within Trackmania. Before I go into what they are, I have had a few situations where boosts and obstacles haven't activated, despite my car clearly running over them to activate them.

When it comes to the track surfaces, you've got a regular surface, dirt and ice. Surrounding these surfaces are dirt, sand, rock and so many trees, walls and more to slow you down or for you to crash into. It likely sounds simple enough, but that's when the boosts and obstacles come into play. Imagine going through a track, keeping up your speed for your engine to then cut out, you then have to navigate a humped track, going around and through obstacles before heading to a final upward slope with an icy surface. Sure, the friction is lower, but there's no recovery if you aren't going fast enough or if you make even the smallest of mistakes.

From boosts that simply speed you up on the track to ones that turn you into some WipEout style vehicle, you're often going to be going too fast for your liking. The car alone seems to accelerate more than you think it should and then it takes so much practice to get used to the handling. Then think about track obstacles like big poles stuck out of the surface and track features that stop your engine or make your car fragile to any sort of collision, to others that completely stop your ability to steer, it's hard not to think that there's a little too much going on at points.

It all depends on the track though. A well-designed track can be challenging without being punishing and finding that balance can result in something perfect. The track creator is incredibly extensive, offering so much for you to use, with a fantastic sense of verticality and offering so much space to use. I've spent some time in the editor and created something a little naff, but this is something I can honestly see myself coming back to over and over again.

The problem now comes with the monetisation of Trackmania. I said this in the review but this is a Games as a Service model in the way that you are expected to keep paying. Ubisoft love to say that Trackmania doesn't have a subscription, it's a 'membership'. There are two tiers to this subscription, these being "standard" or "club". I'm not going to list everything these subscriptions offer, instead I'll just add the infographic below this paragraph.

Needless to say, this subscription risks segregating and segmenting the community. Those who play the free version have access to the official tracks and a limited track creator. User-created tracks? They're going to have to hope they land on an interesting one in an arcade race. Those who subscribe will have a host of features that do make Trackmania feel like a full title, the free version simply feels more like a preview copy, a demo.

Still, free or not, those who play the game are likely going to enjoy the rather crisp, clean and minimalist appearance of the game. This isn't to say it can't look pretty, when you're driving through some of the decorations, like cherry blossoms, the Trackmania can genuinely look great. Adding to this aesthetic quality is excellent sound design, with a lovely roaring engine backed up by high-tempo music that complements the speed of the game perfectly.

Do I recommend Trackmania? This is a hard one. There is already a wealth of user-created maps and those who enjoy the racing of the series are going to find a lot to like. The track editor is very extensive with no limits in sight. Are you happy paying a subscription (£8.59/$10 per year for standard, £25.99/$30 per year for club)? If so, it's worth picking up. As a F2P game, it's adequate. You'll have fun, but that fun will be restricted by the limited number of tracks until more are released with twenty-five tracks every three months being made available for free. 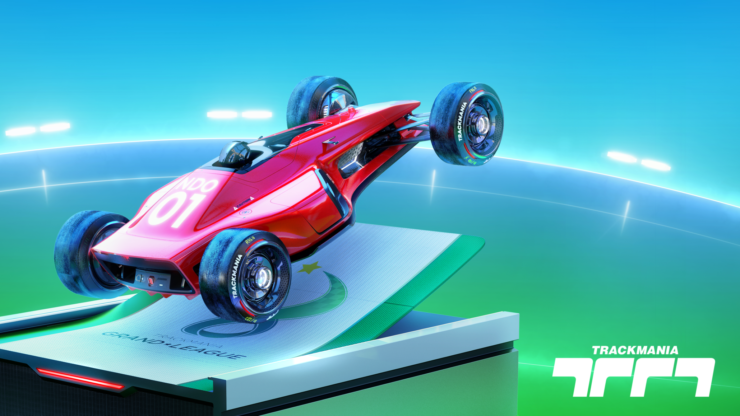 Trackmania is a nice addition to the series, one that looks and sounds great and, even when it's incredibly frustrating, it's fun. The downside is the new monetisation system, a subscription service that looks like it could segregate the community. The game is very extensive and if the audience picks it up, it could be great for the same reason the other Trackmania games were: user-created content using an outstanding track creator and editor.