Valheim Guide – How To Defeat The Nasty Bonemass Boss 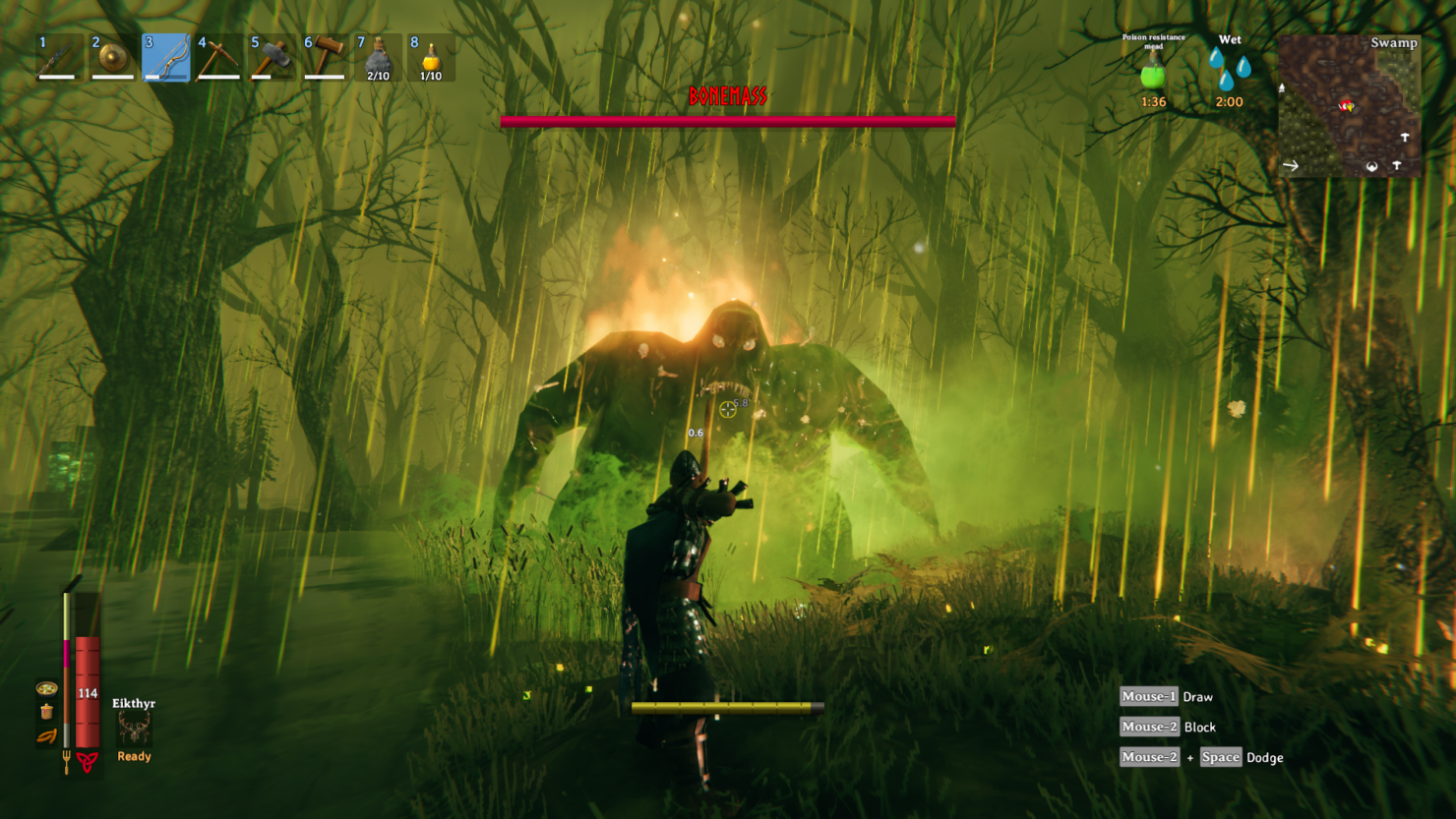 After Eikthyr and the Elder bosses, you’ll start to be in a position to hunt the Bonemass. The third boss in Valheim can be found in one of the game's many swamps. It is a deadly region filled with terrible creatures and the boss itself can be almost impossible for the unprepared.

This guide will explain how to summon and defeat the Biomass, complete with hints for anyone struggling to do the damage required to kill the thing.

Preparing for the Bonemass 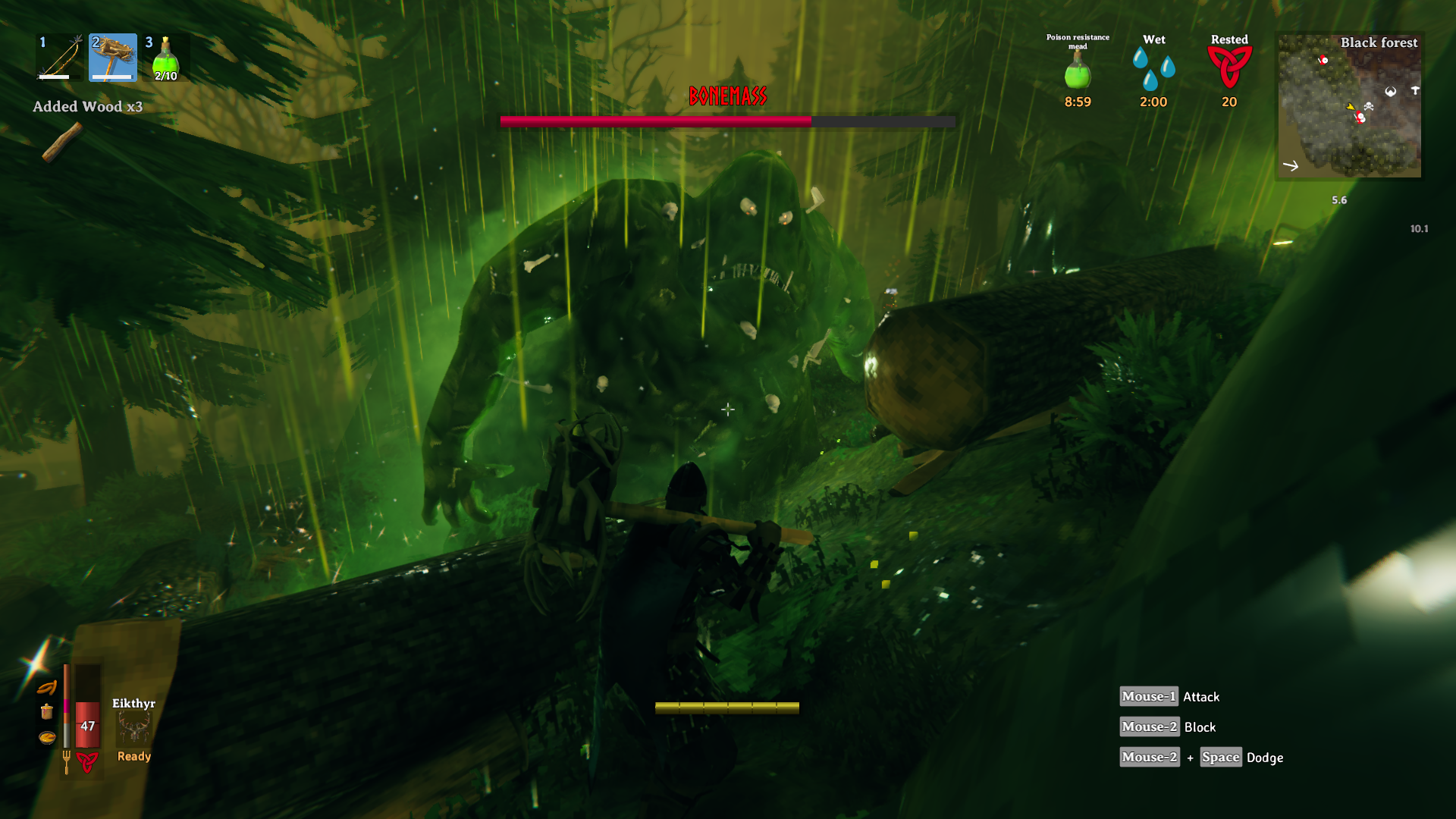 The Bonemass Boss is found in the swamps, with a giant yawning skull as its altar. Stumbling across the altar like all the other boss altars can be extremely challenging, so instead you’ll want to search the Sunken Crypts dotted around the swamp for a red rune that gives away the location. Depending on where it is you might need to voyage to another island and set up another camp near to the target. Make sure that you trigger the fight as close to dawn as possible, as it can be long and the effects of being cold and wet (the swamp is always wet) will be devastating to your stamina regeneration.

The altar will be in a swamp though, so you might also want to prepare some poison-resistant meads to explore, but you will definitely need some to fight the boss. Sunken pits and deep water will put you at a massive disadvantage compared to his towering frame. If the altar happens to be near the edge of the swamp, you could always lure him out to more stable ground, especially if he’s open terrain. Failing that, think about gathering a lot of stone and using your hoe’s to raise the ground around the altar so you’re on more even, less wet ground. This will take considerable time and effort so make a decision before you ride into the Swamp to fight him.

You’ll also want full iron armour before you spawn the Bonemass as well so hunt through the Sunken Crypts until you have enough iron to build yourself a set, and an iron mace to. 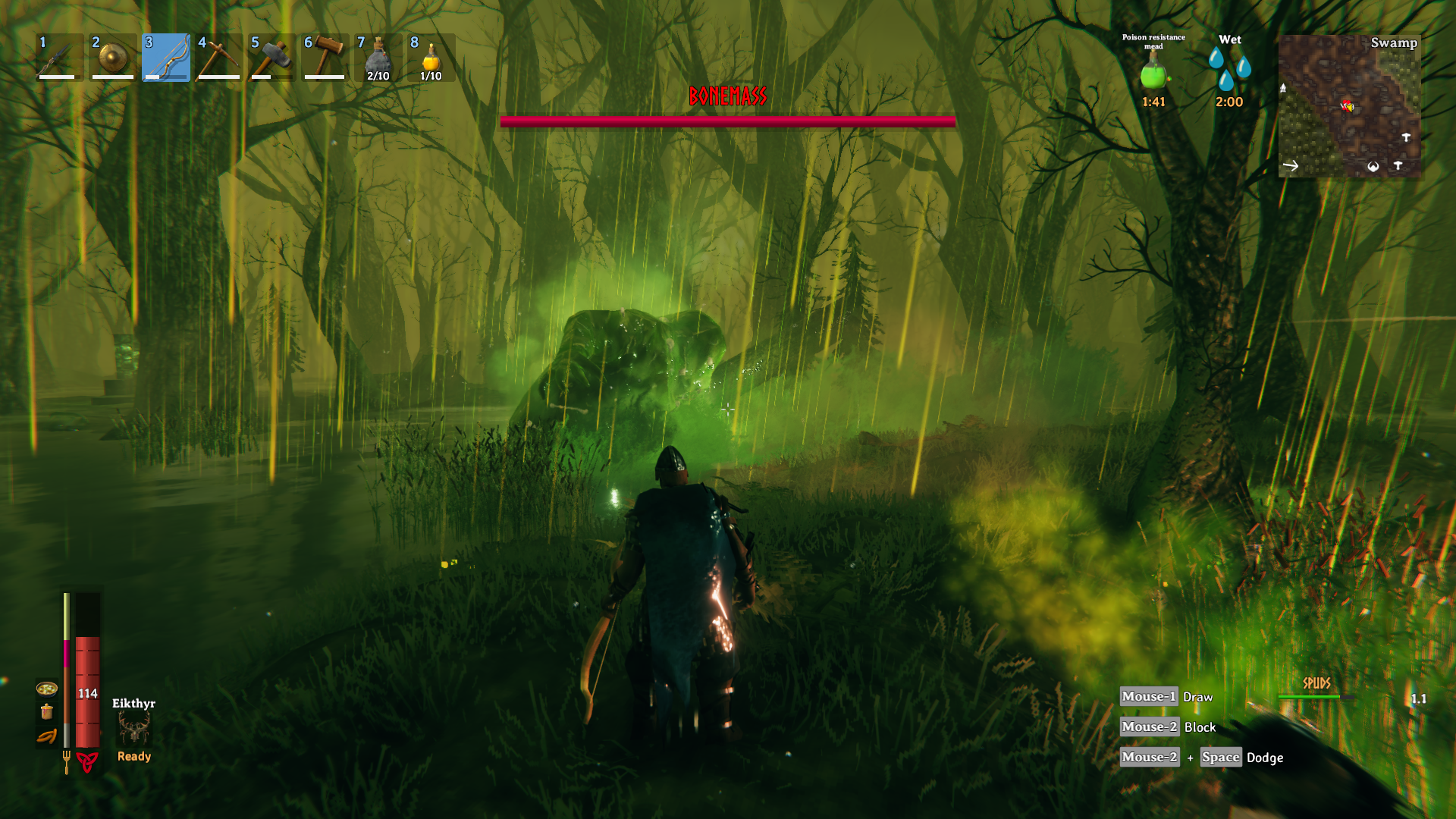 Like all the bosses in Valheim, you have to summon the Bonemass, rather than simply stumble upon. To summon the Bonemass, you’ll need to find yourself 10 Withered Bone and toss it into the green fire at his altar. Withered Bone can be found in Muddy Scrap Piles and on some smaller altars in Sunken Crypts, both of which are found in the Swamps biome.

Once you’ve got the Withered Bone in the fire the sparks will fire and gather around where exactly the Bonemass will spawn. It takes a few seconds so this is the perfect time to down and poison resistance mead and trigger and buffs you want for the very start of the fight. 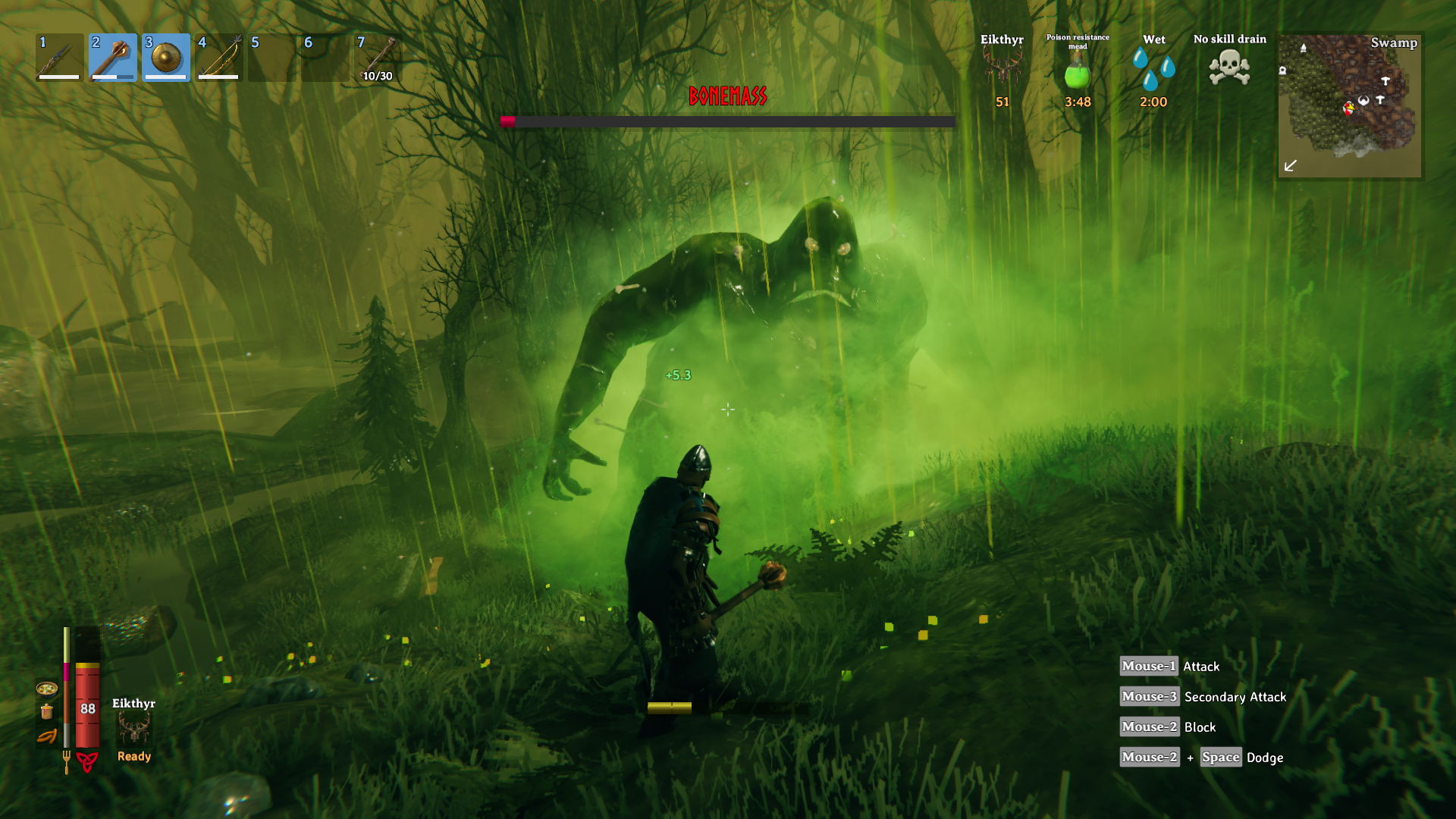 Having beaten the first two Valheim bosses, you might believe the Bonemass will be quite similar: challenging, but nothing insurmountable. But the Bonemass can wreak havoc on your Viking raiders if you come unprepared. The immediate area around his altar is not a great place to fight him.

And there’s a chance you’ll be doing next to no damage to him either. Unlike the other bosses, the damage type you do will have a huge impact on the blubbering mass so you have to have the right tool for the job. Piercing damage is almost useless, which means any archers or spear carriers are out of luck in this battle.

Instead, you’ll need to arm yourself with blunt instruments of destruction. An iron mace (preferably upgraded once or twice) is the best tool, but an upgraded bronze mace can be almost as effective. The stagbreaker might feel cool, but its huge build-up time is too slow to do the regular damage you need here. 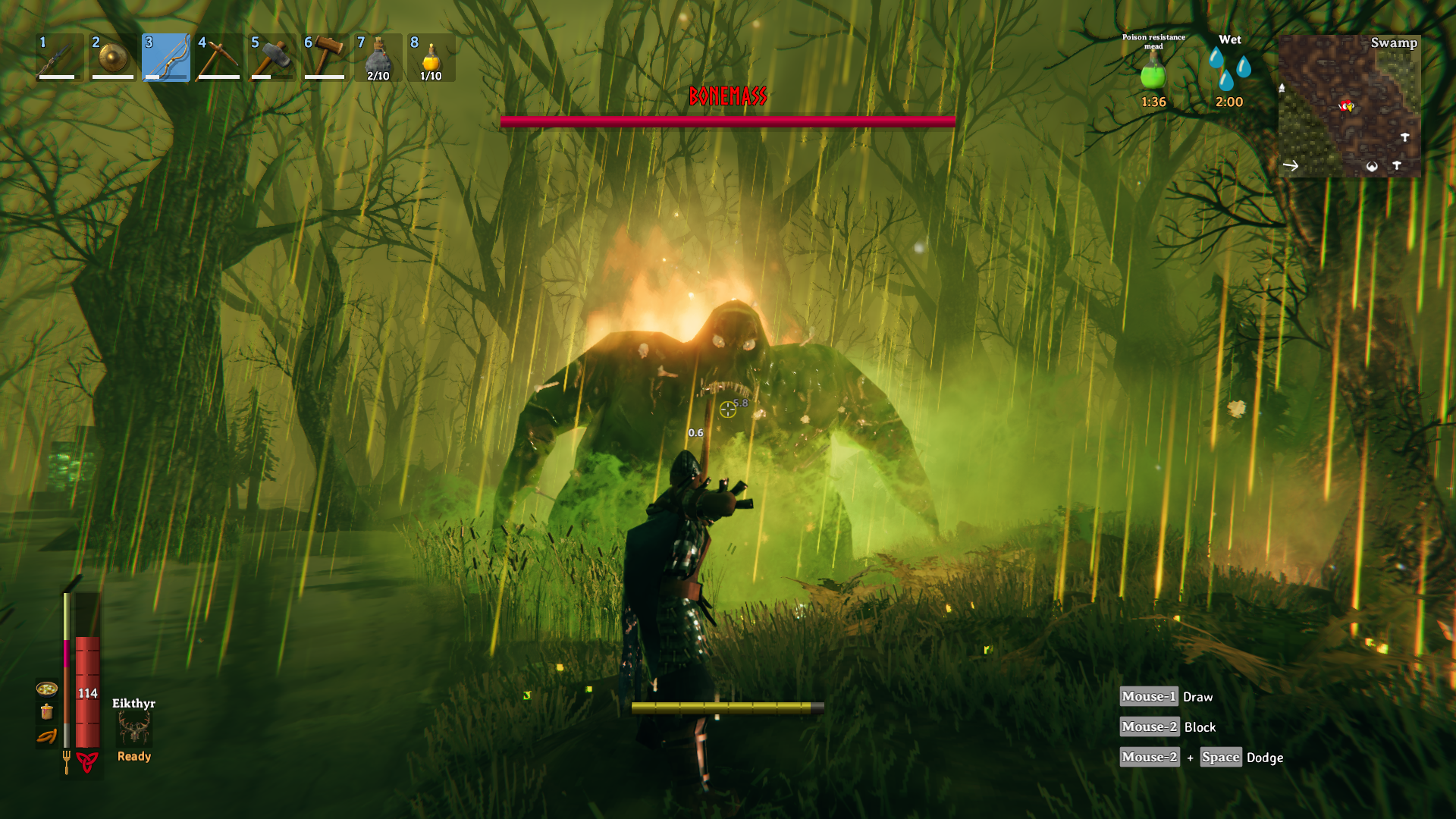 Once you’ve got your loadout ready, you’ll have to start worrying about the boss. First and most importantly, the Bonemass will begin to regenerate health if you don’t hurt it for long enough, so you have to make sure you’re chipping away at its health all the time. Sometimes the Bonemass can sort of wander off from the fight, so have a bow and few arrows to fling over if you can’t close the distance quickly. Hopefully, you’ll have an easier time on your specially built arena, but it can still be a problematic fight.

That’s because one of its attacks releases a huge cloud of poison that can quickly tear through your health even when resistant to that kind of damage. It lingers in the air for a few seconds and spreads pretty wide, so when you see it look down and begin vomiting, move away as quickly as possible. You want to lure him out of the fog so you can get some damage in, but sometimes you’ll want to stay right where it is.

On top of his vomit, it can also throw tumours from under its armpit, but these projectiles aren’t direct weapons against the player. Normally, he’ll fling these slimeballs past you, but wherever they land several enemies will spawn. They will either be blobs or skeletons, but their numbers can quickly overwhelm a group of players. The Bonemass can also do this at quite a fast pace, so always make sure you have an idea of how many enemies are gathering behind you. If you’re in a squad, it might be a good idea to assign some players to handle them specifically. You’ll want to focus on any skeletal archers that might spawn as they can start crippling you from a distance.

This attack can be an advantage though, as the animation takes several seconds. If the Bonemass is out of the toxic area and you’re safe from any mobs that might have already spawned, you can take a good chunk of his health off during this time, but hold back some stamina for the creatures about to flank you.

Its final move is a simple attack, a large arm swing with a relatively short range. Look for the wind-up animation and get ready to get out of the way as it deals a huge amount of damage, coupled with linger poisoning damage that can finish any players who are not in tiptop health. 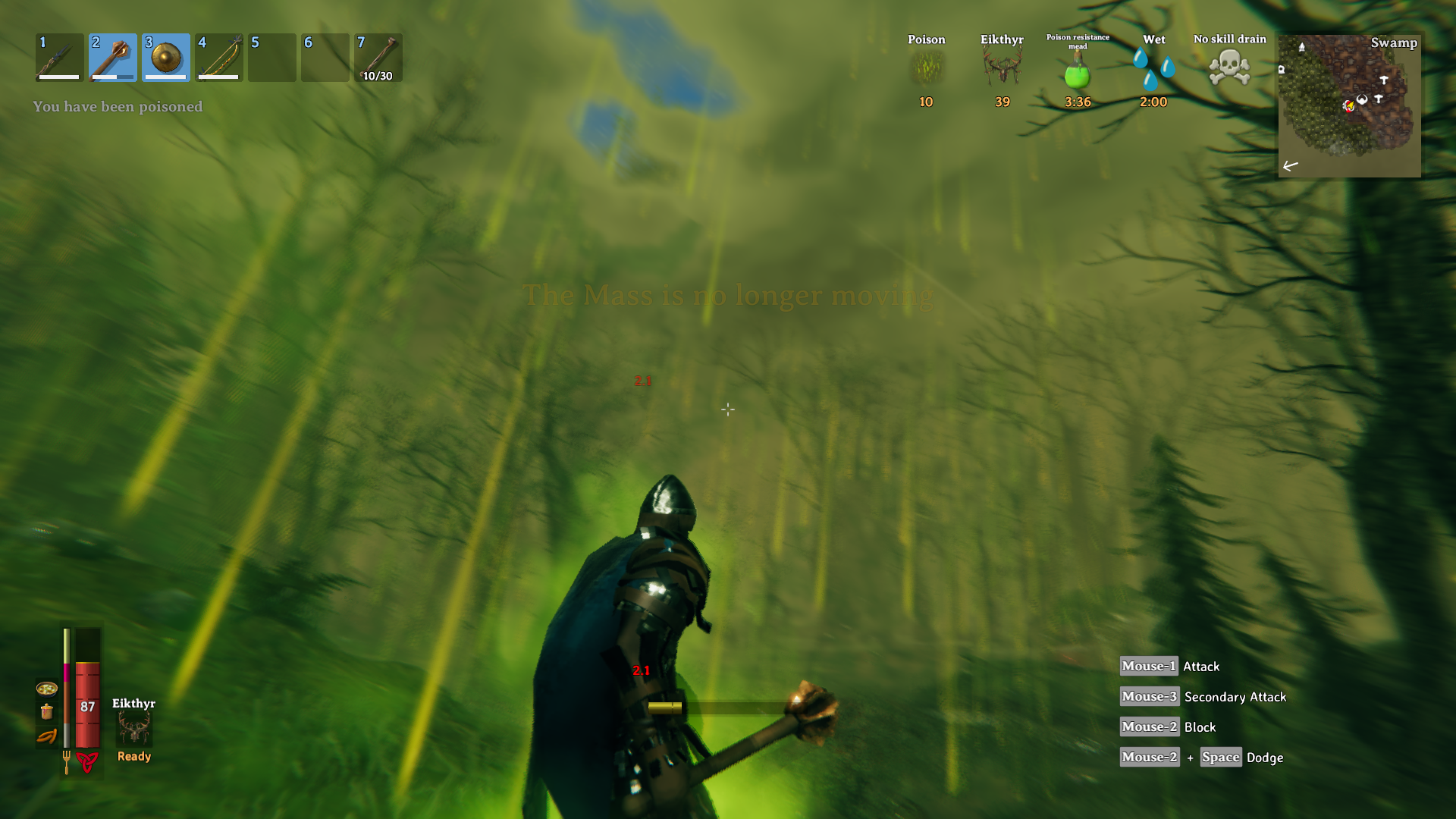 Depending on the terrain, look out for any trees the Bonemass hits with its swings. The Bonemass will do even more incredible damage to trees which can then fall and be a hazard to players. Unfortunately, this Valheim boss doesn’t take much damage if one lands on its head. If you can get behind it during the wind-up to the punch, though, you’ll have another good few seconds to deal some damage.

The Bonemass is best taken on in a group of three or more, so you can share the aggro and handle the mobs much easier. It will also give any players too injured or tired to tap out for a moment and let their bars jump up.

The final tip is for the overexcited players. Once the Bonemass is defeated, make sure you mop up the remaining mobs before hovering up and reading all the new things it dropped. There’s nothing worse in Valheim than dying after defeating the boss.