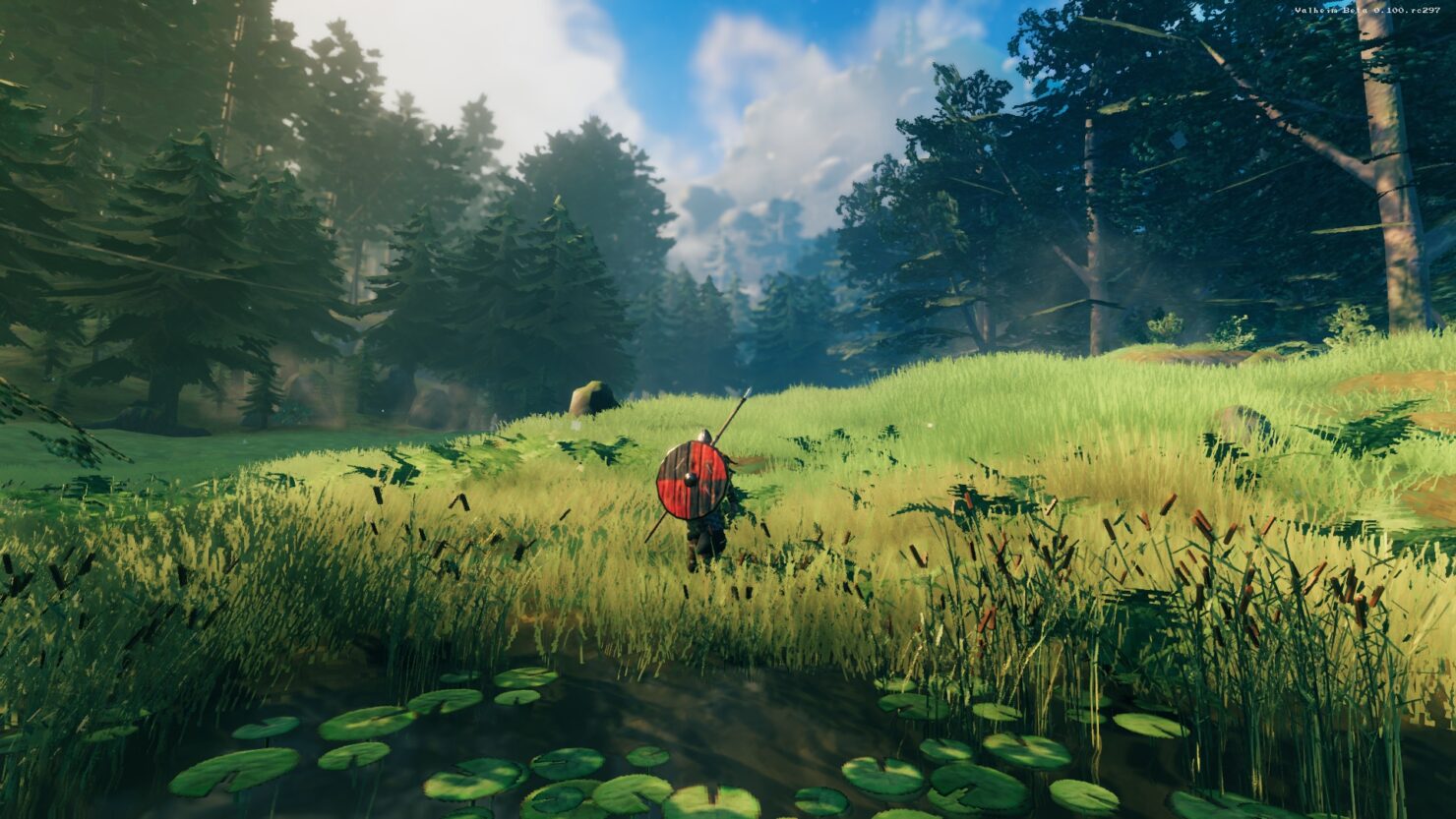 The early part of Valheim will be spent hunting. The resources from kills will make up a lot of the early game weapons, armour, and improvements to your early game settlement. They'll also produce that all-important meat you’ll need to keep your health bar looking healthy. But most animals in Valheim don’t want to die, which makes killing them much more difficult. This guide will run through the basics of successfully hunting deer and boar during the early game.

I Don't Want To Boars You 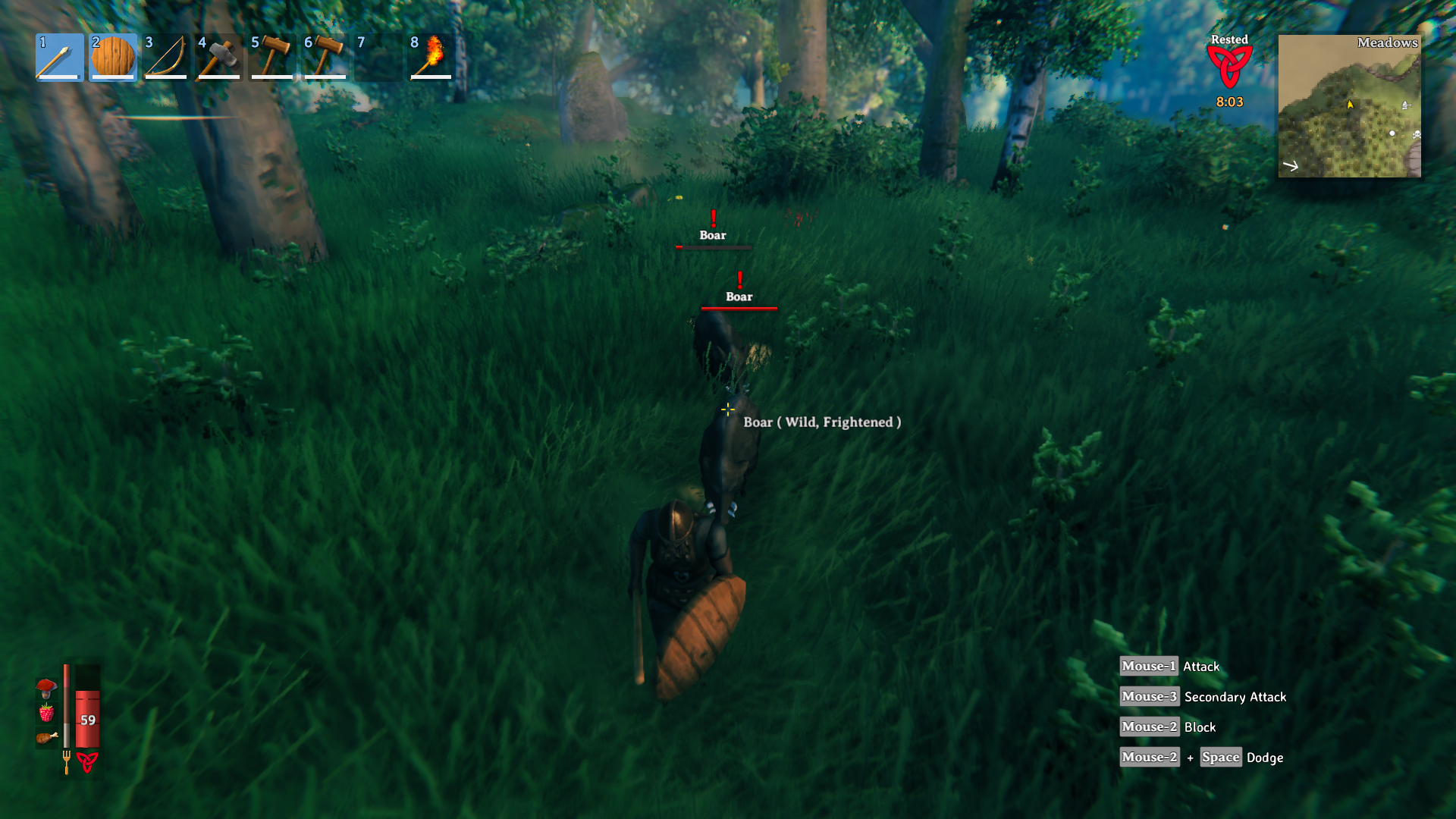 At the very start of Valheim, don’t worry about the deer scattered throughout the meadows at all. Before you need Deer Hide, you’ll need Leather Scraps, which are collected from dead boar. Once you’re equipped with a crude bow or flint spear, you can start thinking about hunting deer.

Boars are easier to hunt and can be dispatched with a mere club, but they still pose a few challenges. The creatures can seemingly spawn anywhere in the Meadows region but are often found in groups near water, so focus your hunt there. They can also be found in the wooded areas, so you would do well to patrol those regions regularly to get as many leather scraps as you can.

When approached, boar will become aggressive, but they won’t outright attack you. Instead, their attack involves them running in a wide circle before charging you and fleeing again. When you see them running towards you, get ready to block or dodge to avoid the damage. Once they’ve hit though you’ll want to slam them with everything you’ve got before they run away again and charge up another attack.

Groups of boars can pose a serious risk to a player with less than fifty health, so try to spot how many you’re engaging with. Try to sneak up on the pack and take one or two out before the scatter if possible. If not, keep moving and only take a few swipes at each boar. You don’t want to leave yourself open. 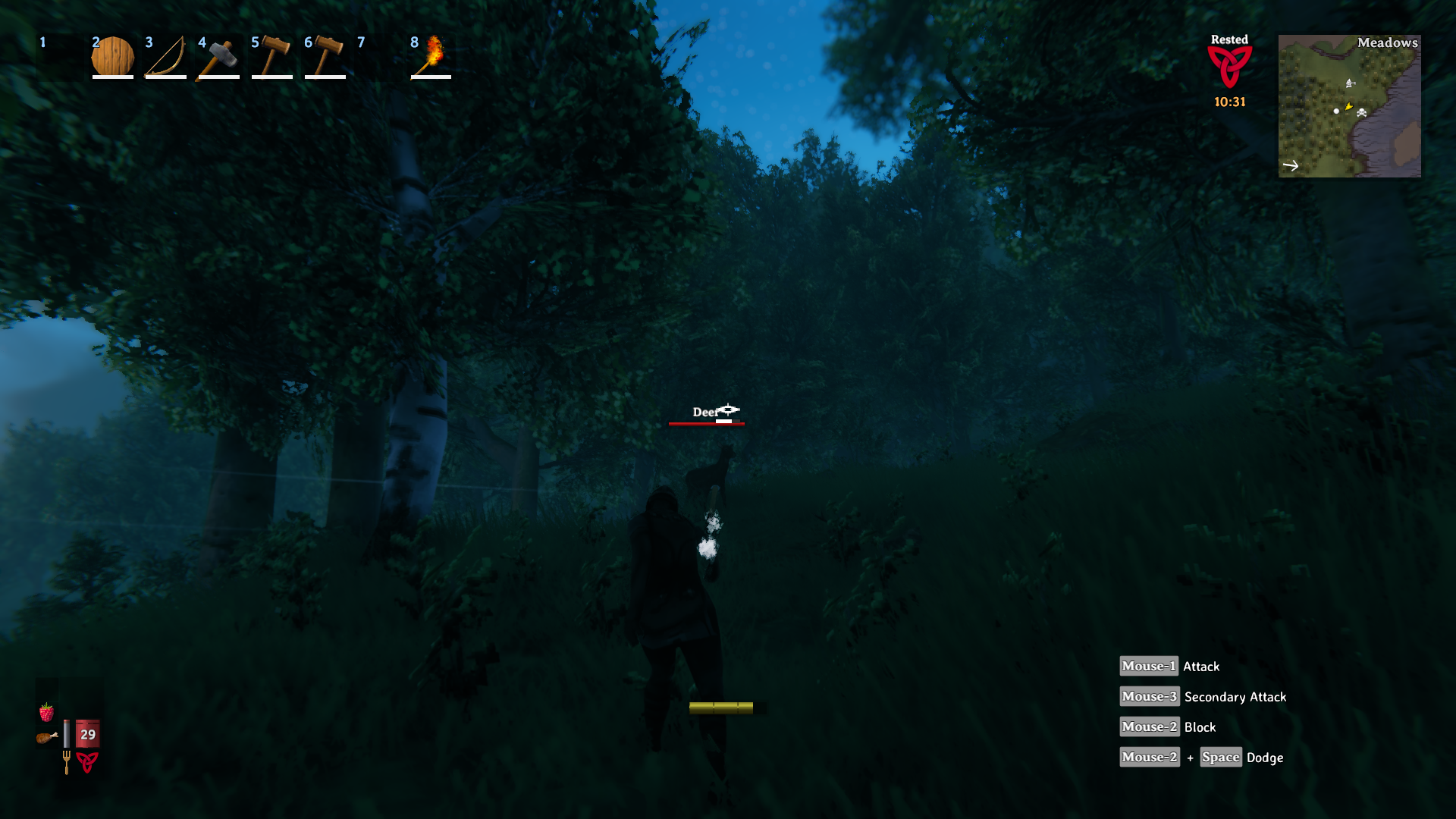 Once you’ve got a spear or a bow, you’re ready to hunt deer in Valheim. Deer hides are extremely useful for making early game armour, but each piece costs six hides. You’ll need to get quite good at finding and killing them before they flee.

With your weapon in hand, stalk the Meadows region and listen for the barking and yapping that these Nordic deer make. As soon as you can hear them, you’ll want to start sneaking so you don’t accidentally alert them. If you can see them, very slowly approach one step at a time to get within range. If you can’t see them yet, move towards the sound of the barking carefully. They can sometimes be hidden behind trees or over hillocks and be much closer than you think.

Deer have two ways of detecting you. If you can see them, they might be able to see you as well. Try to make sure you’re not moving towards them from the front. They have a reasonable cone of vision and will sprint if you get spotted.

But they can also smell you. Check the minimap and look for the arrow in the bottom corner. That indicates the window direction. When hunting, you’ll want to be downwind of the prey lest they sense your presence and flee before you can even think about taking the shot. The easiest way to think about this is that you want the arrow pointing towards you, not the deer. If that makes taking a wide circle around them, do it.

Once you’re close enough and you can see the deer, use your bow or spear to bring them down. The middle mouse button will launch your spear and can fell most deer in one hit. Your bow needs to be charged by holding down the left click until the circle is as small as possible.

Remember that neither of these weapons fires in a straight line for long, so anticipate the arch and aim above your target. It can be tricky without a crosshair that slopes down, but you’ll get a feel for the weapon soon enough.

When aiming at the deer, you should see its health bar appear above it. If the stag has any stars below its health bar, it is a more valuable kill. These will drop more supplies when killed but have more health. A single arrow or spear might not be enough to take one out, so be ready for a chase.

Thrown spears can be collected from where they land (if a creature survives being hit by one, the spear will be on the ground, not the creature), so it can be good to bring a spare spear in case you need to make a second throw. If you lose track of the deer after it runs, try to retrace your steps to where you first hit it. Most deer will return after a couple of minutes, so you might be able to get another chance.

And finally, remember to repair, resupply, and upgrade your hunting tools and a covered workbench before you go out. There is nothing worse in Valheim than finding a herd of deer but realising you're out of arrows or carrying a broken spear.