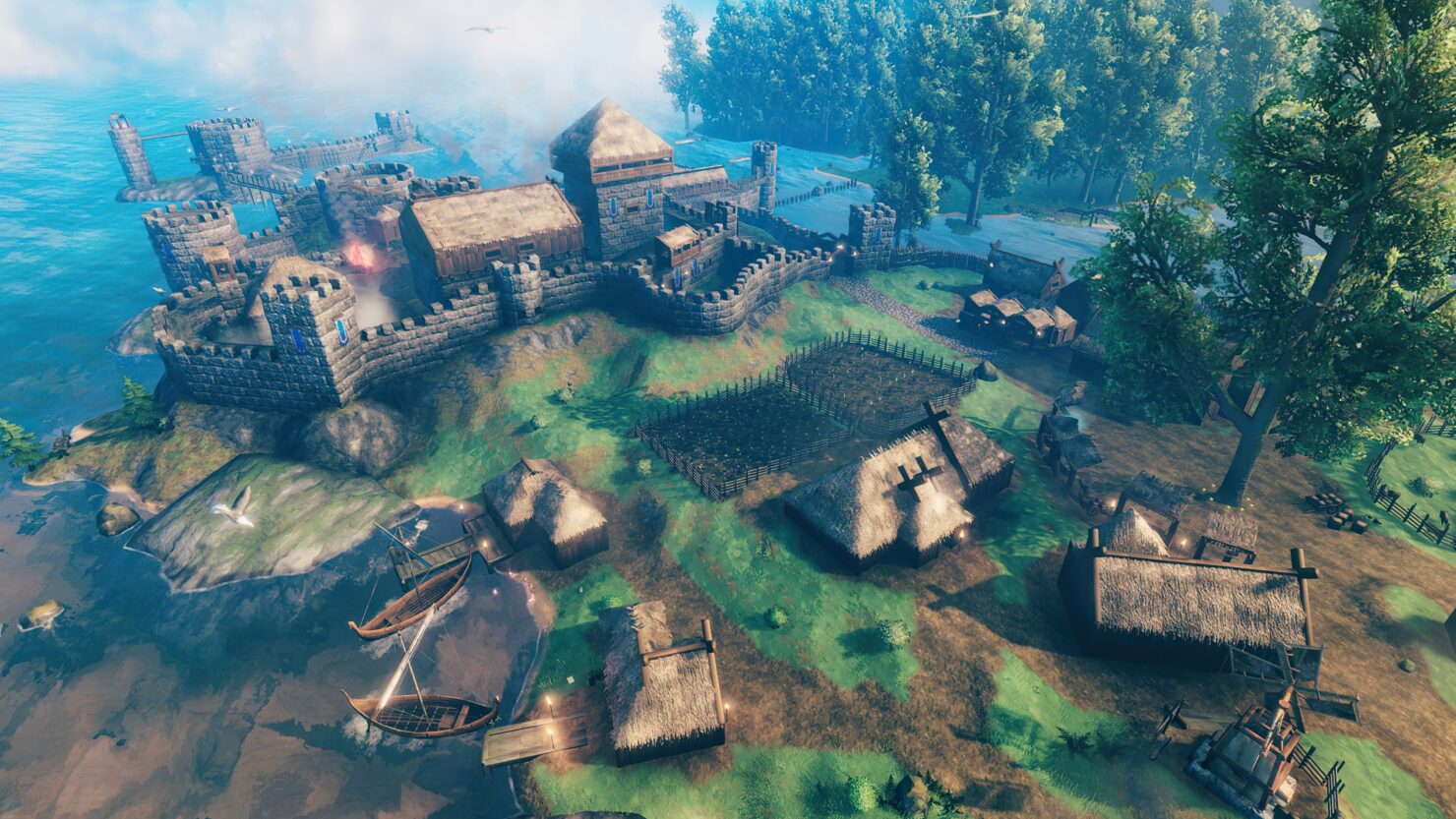 You shouldn’t worry about building a vast castle or extensive manor when you first start surviving in Valheim, but once you’ve got the basics and have started preparing farms and forges, you’ll want to expand and consolidate your existing settlement. Your buildings can also be besieged by foes as well, making it even more important to have something that you either don’t mind losing or know you can withstand the onslaught.

This guide will run throw the more advanced aspects of building larger wooden structures in Valheim for players wanting to expand without it all crashing down around you. 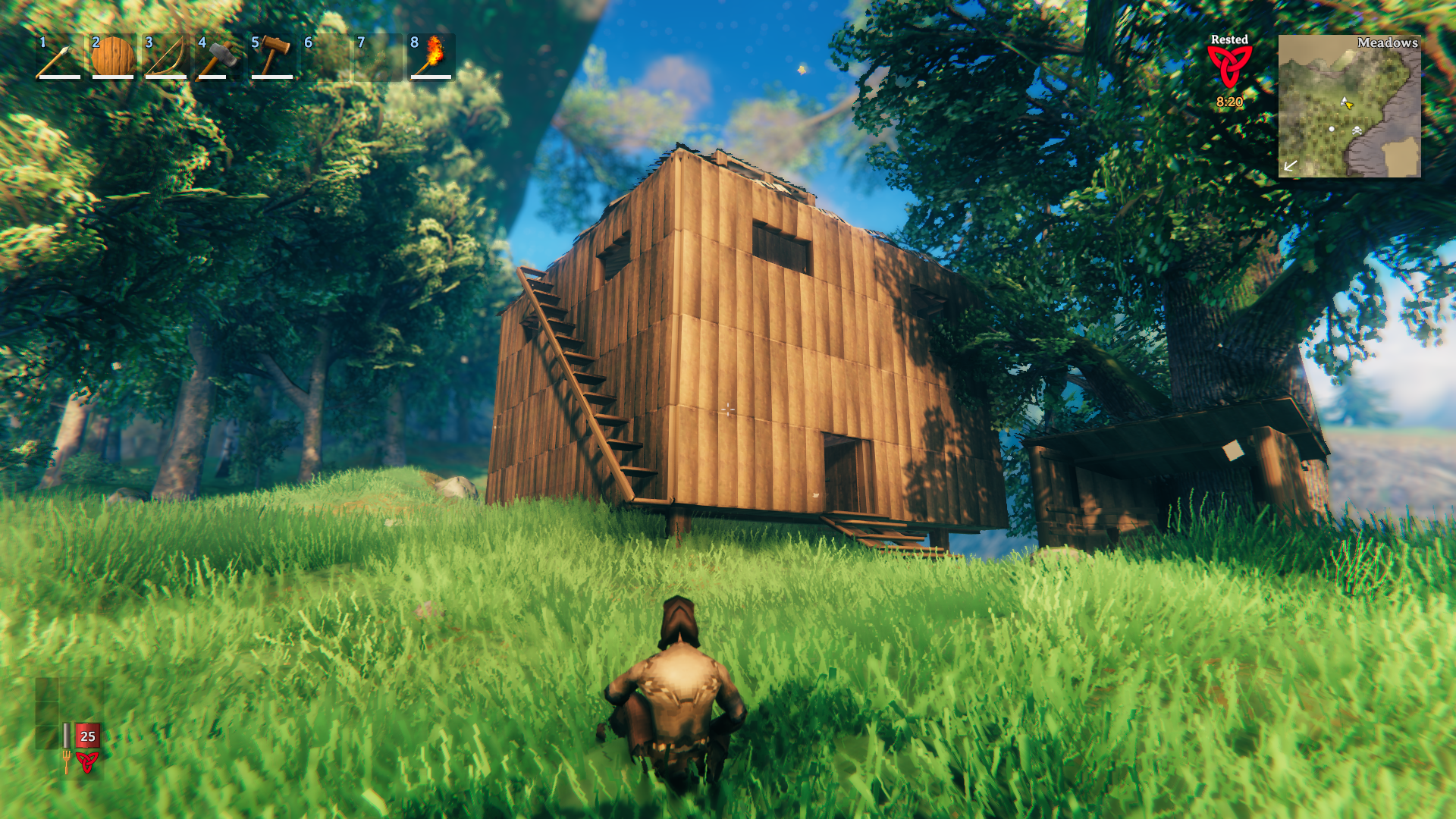 A lot of the furniture you need to use in Valheim doesn’t work unless its sheltered and has a roof above it. Rooftops can be stressful for several reasons (see below), but you’ll have to make them to get the full benefits of your structure, such as using the workbench properly and setting a spawn point via a bed.

Thankfully, you can cheat a lot of that stuff when you’re building but just whacking up a few roof tiles over whatever it is you need. But if you’re reading this guide, you’ll want to have a polished finished product that a haphazard maze of roof tiles scattered on the inside of a square structure.

When building the roof in place, it can be difficult to get the angle right to slot the pieces together high above the floor. The easiest solution to this is to build a ladder on the outside of your building that leads to the roof so you can work from above. If you’re using the steepest sloped roof, you won’t be able to work on it, so you might need to add some scaffolding to keep it safe for you, but the more gentle rooftop can be run across.

Just remember that fall damage is huge in Valheim. Always ensure you’ve got a safe route down and spawn point nearby if something does go wrong.

Structures Can Be As Stressed As You 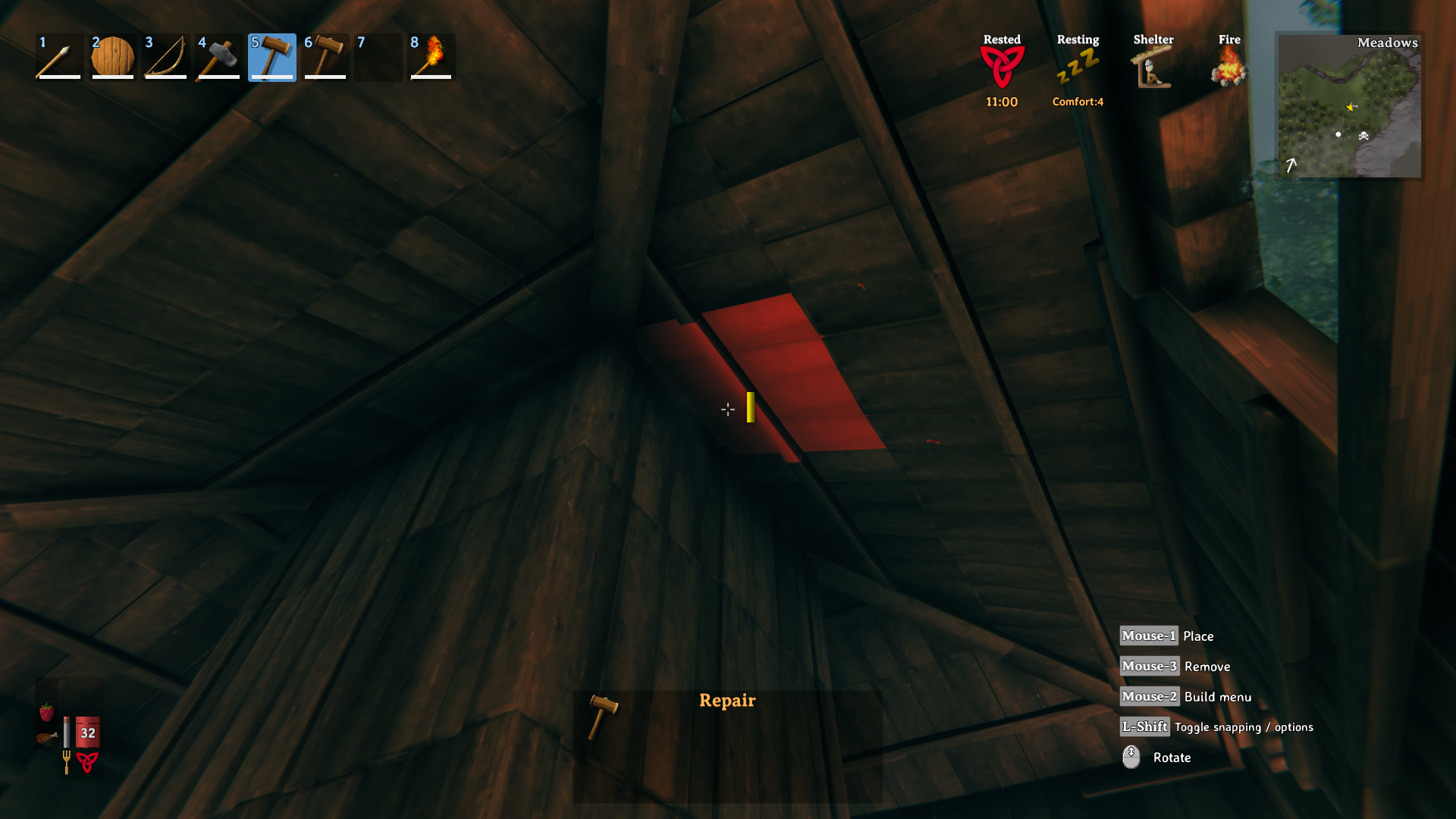 When on the build menu (with your hammer out), you’ll see that each piece of building you place will be coloured somewhere between green and red. This is the indication of that piece’s stress level. Stress is caused by weight added to it or by its distance from any support. Once the stress becomes too much (seen as bright red while building), the piece will collapse. Thankfully Valheim will allow you to pick the wood used to build it, but you’ll have to put in reinforcements before you can fix the broken piece into place.

For example, when laying out the floorboards for a new building over uneven ground, you’ll notice that the further your structure floats away from the ground, the more stressed each floorboard gets. Or as you start to build the roof over your longhouse, you notice each piece of thatching becomes more stressed as it stretches from the wall.

To fix this, you’ll need to add more support, and the easiest method of adding that is with beams. You’ll see them in the building menu, and while they can also add a nice aesthetic element to your home, they are more importantly great at reinforcing the structure you’re working on. On top of that, they can slot nicely into the wall panels, making it easier to reinforce multiple floors. These straight beams are vital while building a chimney, an essential part of any Viking structure in Valheim.

Once you’re harvesting core wood from the deep forest, you’ll find these new beams can reduce stress further. Slanted beams can be used both internally and externally to add more support and snap onto the structure to ensure a uniformed look. These can be especially useful at reinforcing a large roof with beams that stretch out and touch the ground from the outside. 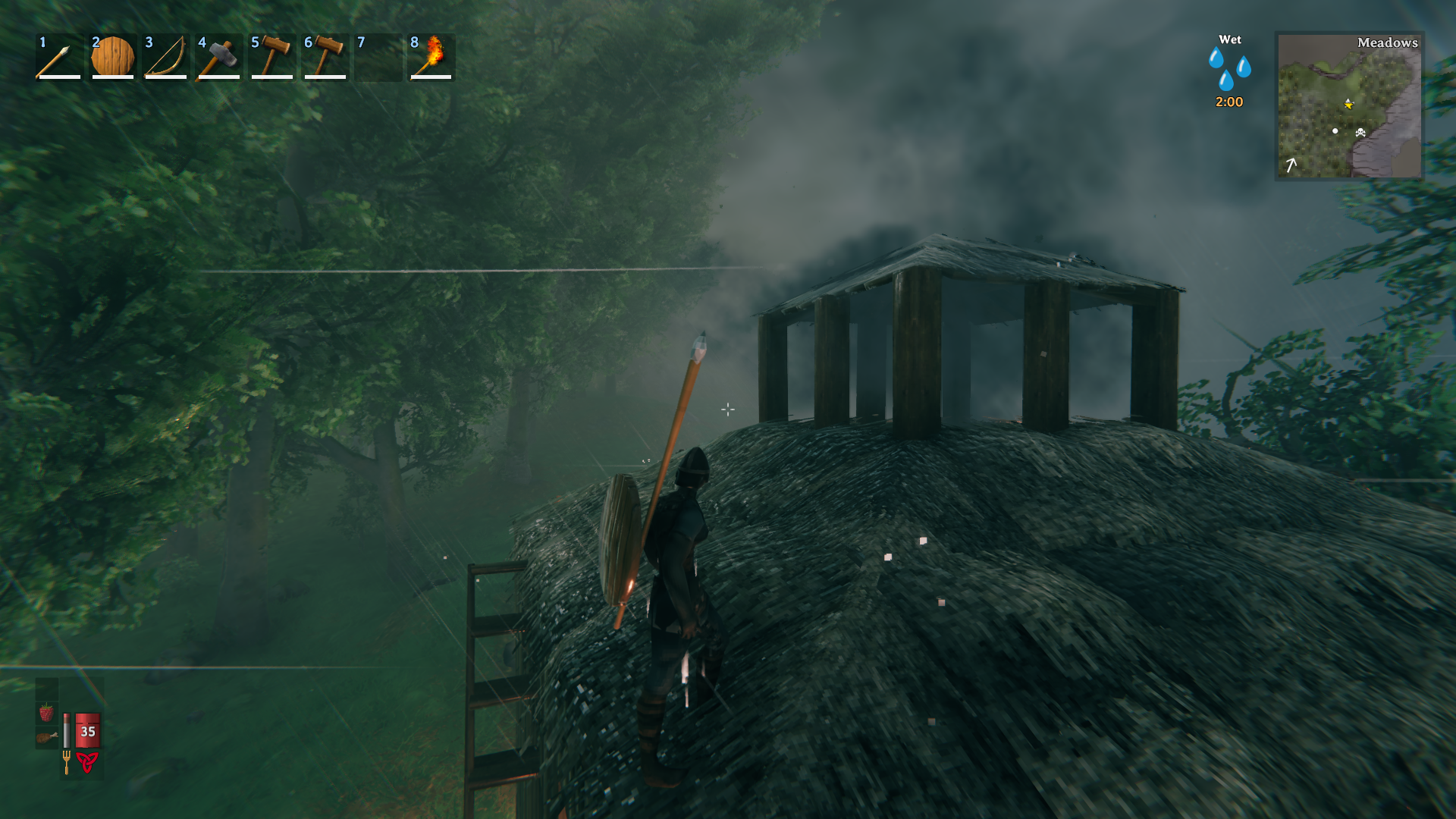 By now, you probably will have noticed two things as you experiment with your own building. One is that to sleep in a bed and skip the night phase it will need to be near and fire. And number two is that a fire in your home will immediately fill it with smoke and damage the whole structure.

To resolve both of these issues, you’ll need to build a chimney into the design of your home, something you should really account for as you plan the structure, as tacking it on at the end will undoubtedly stress the rest of your building. At its most basic, a chimney is simply a hole in the roof to allow the smoke to escape, but there is more to it than that. It is best to place the fire in the centre of the building if it's a square one, as you’ll get the most benefit from its radius this way, but that makes the chimney harder to support. You can build a fireplace for your chimney if you’d prefer as an alcove on the side of your building. This will give the chimney the most support but reduce the fire's effect at the same time.

On top of the hole in the roof changing the stress of the building, it also isn’t enough to keep your home warm and sheltered at all times. A straight hole to the sky will allow the rain to pour through and douse the fire below. With the fire out, you’ll lose all the benefits of having it in the home, including sleeping. When constructing a chimney, you should make sure you’ve added a cap to the top that keeps the rain out without trapping in the smoke.

The easiest way to do this in Valheim is with straight 2m beams jutting out the top of your rooftop that support a second, slowing covering over the chimney. With that all in place, you should have a chimney that keeps the rain out and the heat in. For further help, below is a simple guide for a larger structure you can use as your stronghold or fancy house.

Start by creating a 6x6 base of floorboards on as flat ground as possible. After you’ve laid them out, support any overhang with some beams in the ground and remove the middle 2x2 floorboards to create a firepit. Stack two sets of wooden walls around the edge of your plan, adding doors and windows as you prefer. Use beams around the edge of the pit to support the second floor and include a staircase against the wall to reach it.

Build another 6x6 layout of flooring at the top of the stairs, leaving the middle 2x2 empty. Once again, build the walls around the edge, but this time wall up the central chimney too. You’ll also have to add some beams around the staircase wall to reduce the stress.

Head outside and build a staircase leading to the roof and use the gentler gradient so you can walk across it. Build up the rooftop with corner pieces to seal it, once again making sure to leave the centre 2x2 squares empty.

Looking down into the chimney stack, add beams running up the corners and centre points of the chimneys, then extend them an extra 2m above the roof tiles. Once they are in place, add the last bit of thatching to the rooftops to cap the chimney.

With all that done, you should have a tall square building with a central fire and functional chimney. It's simple but gives you a good base to start adding extensions and experimenting as necessary.