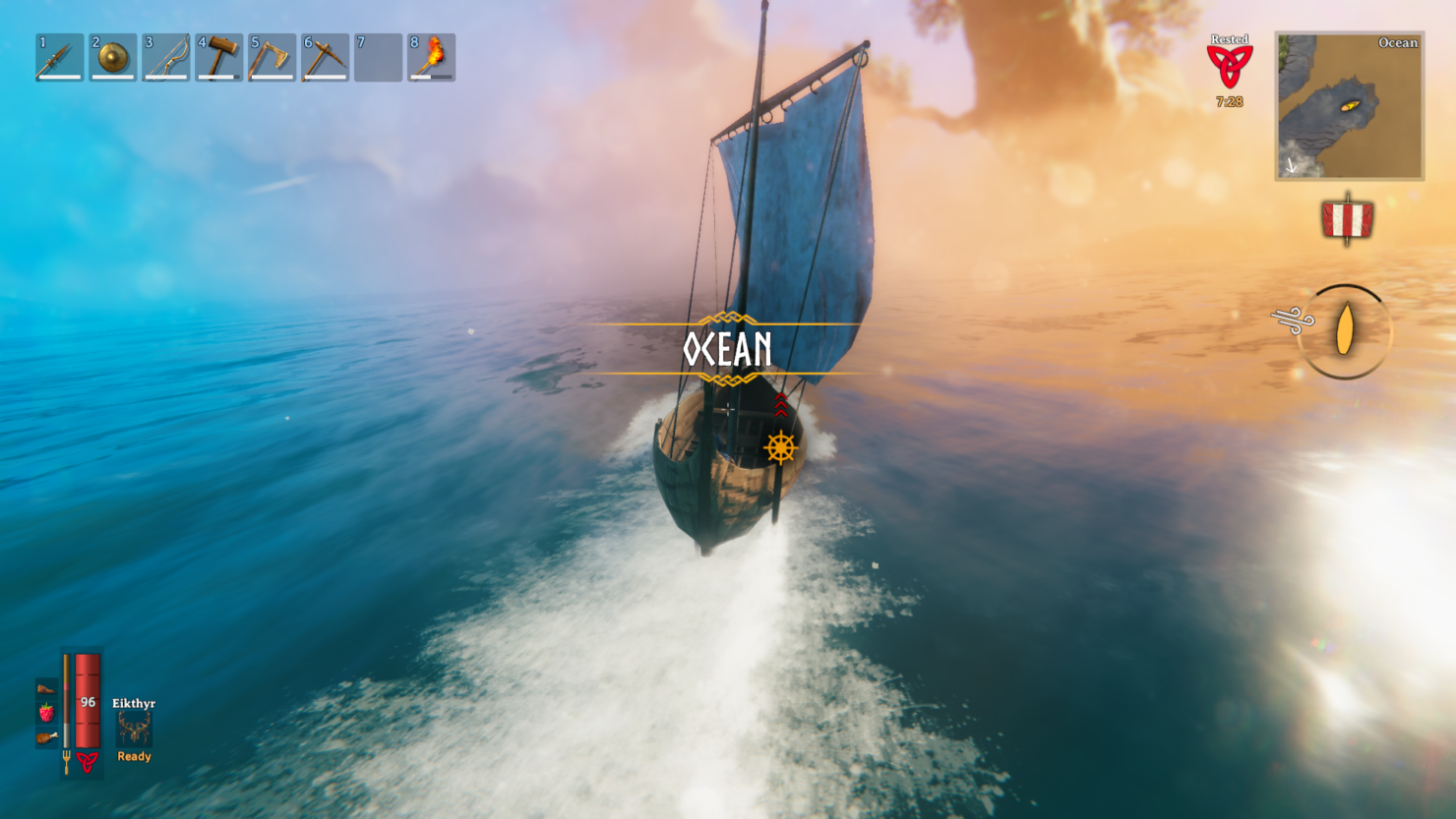 Viking survival game Valheim crafts a beautiful and dangerous world that encourages players to wander far from home to discover the treasures and dangers beyond the horizon. And nowhere is the player more temped to travel than in the open ocean. The vast expanse of water promises unexplored worlds beyond your shore and begs you to conquer it. But such a voyage is treacherous and you might not be sure what to expect.

This guide will walk you through all the basics you need to be a true sailing Viking and what you might encounter while you’re out there. 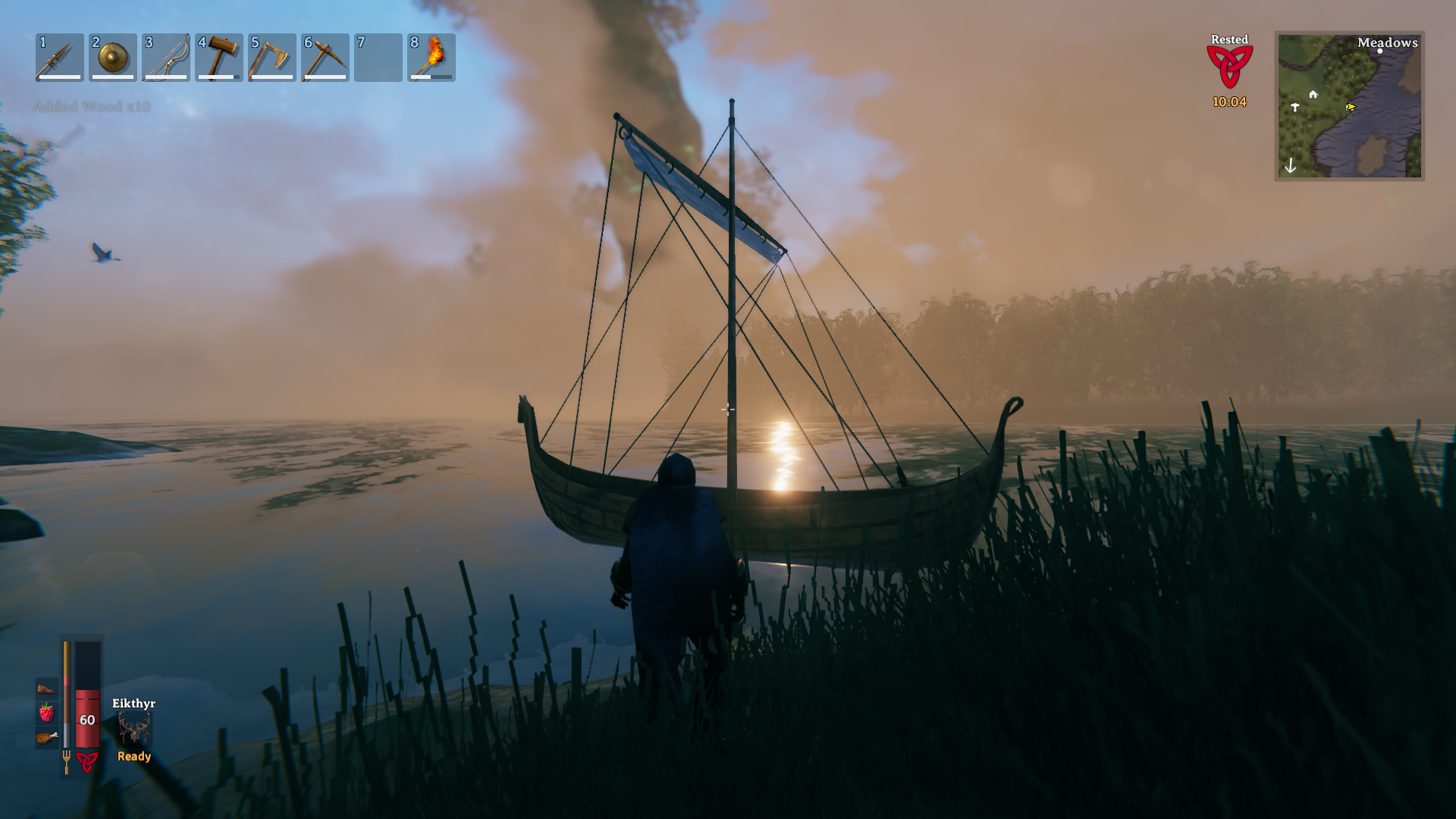 While you’ll almost immediately learn to build a raft in Valheim, it is not recommended that you use it to explore the oceans. Although relatively cheap, it is flimsy and slow and liable to get you in serious trouble far from land.

That’s not to say that they don’t have any use, though. Rafts can be great for coastal exploration or as a ferry crossing over wide rivers and lakes, but they should not be used to venture far from shore or into the Ocean Biome.

Instead, you should try and contain your inner naval explorer until you can build a Karve. This more studier vessel even comes with storage space to operate as a courier or to hold your arrows if you’re out hunting. It can take more damage and move faster with the wind, making it a much more ideal vessel to venture into the Ocean and make it back to land in one piece.

Making a Karve does require some bronze nails, though, 80 in fact, which means you’ll need to smelting bronze before you can begin construction (and have four bronze bars to spare). It also requires Fine Wood, which means you’ll need a bronze ax to chop down Birch or Oak trees. There are quite a few conditions to get this craft, to be sure, but it’ll be worth it when you’re able to start island hopping at speed and with less risk.

One final note on building your boat. Once it's complete, you might want to build a dock or at least get into the habit of marking the vessel's location on your map. 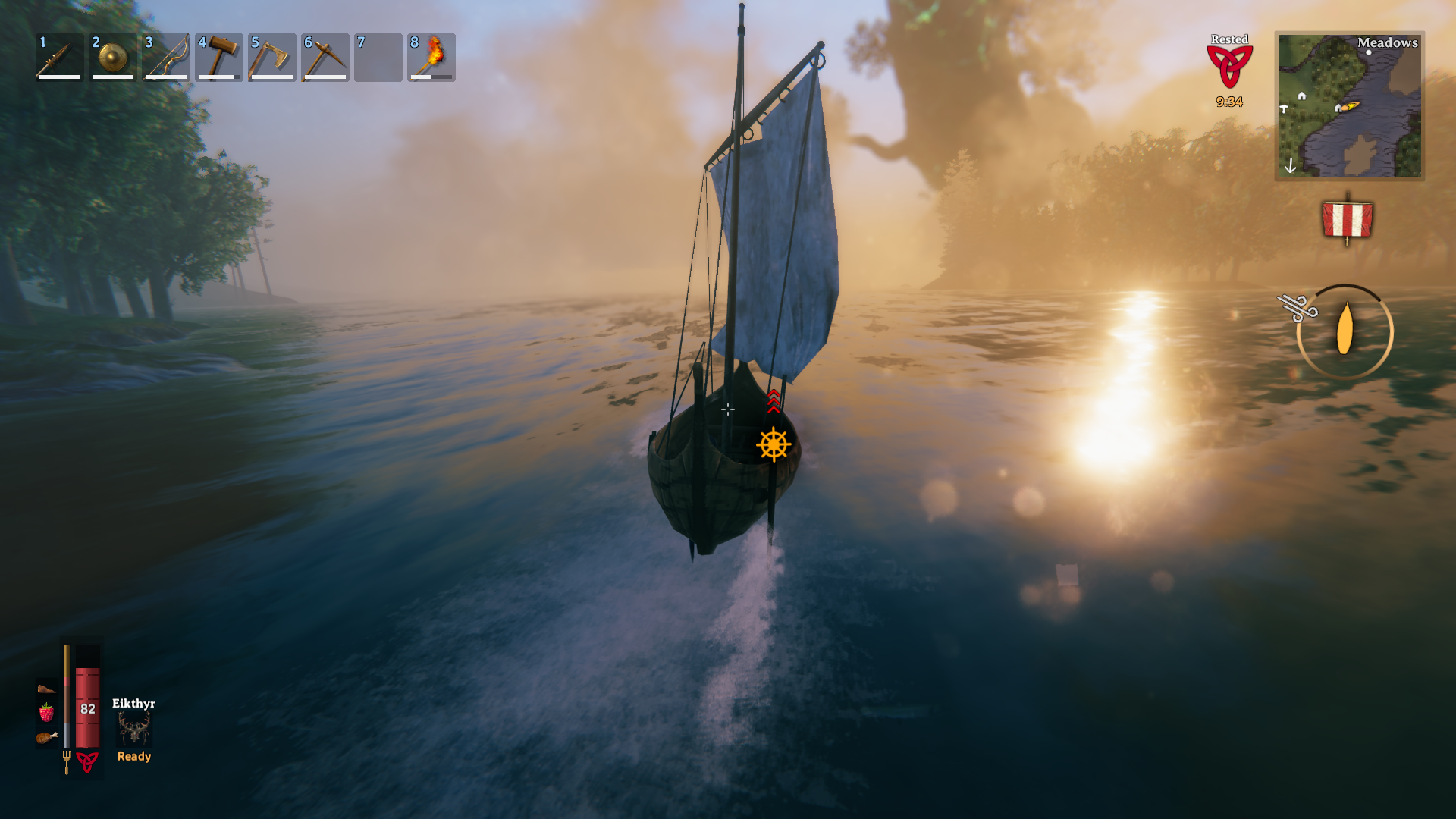 Now that you’ve got your watercraft ready to go, you’ll have to learn how to actually sail the thing. Sailing isn’t complicated in Valheim, but the mechanics feel quite different to running around so it can be a little disorienting at first.

Once you’re on board, and there’s a little ladder that lets you climb up from the waterline, you’ll want to grab the rudder to gain control over the ship. Your yellow Vikings might want to grab the mast or sit on the benches while traveling, since falling into the open ocean is more than a little dangerous.

You’ll notice that the Karve has three forward speeds that can be adjusted with the W key. Out on the waves, you’ll want to be moving at top speed, but as you approach the land, you’ll need to slow down to dock safely, especially in high winds. There’s even a single reversing speed for if your ship gets a little caught up in the reeds or rocks around the coast.

And you’ll need to start paying attention to the wind as well, but the game handily shows a large map of the wind's direction as soon as you take the rudder. You don’t have to worry about your sails, they will automatically adjust to catch as much wind as possible, but you’ll still move faster with the wind at your back.

In Valheim, sailing directly into the wind will becalm your boat, forcing you to crawl painfully slow through the water or not move at all. The wind changes direction every couple of minutes, and your objective might sometimes be right behind the breeze.

To avoid this, try the ancient art of tacking, which works surprisingly well in Valheim. Instead of traveling (or not traveling) in a straight line towards the wind, zigzag left and right of wind to catch some speed and head roughly in the right direction. It doesn’t get you there as quickly as some lucky wind will, but it does get you there.

And then there is steering, which is pretty simple. Use the A and D keys to turn left and right, with the turning circle dictated by the wind and sail speed. But it is important to remember to rotate the rudder back to neutral once you have aligned your boat. Leave it, and you will be left in a circle. The game will show which way you have turned, so it is easy enough to make sure you’re pointing forward, but you can sometimes forget.

As a final piece of advice for sailing, be careful when disembarking your ship. You might want to stop away from the shore for several different reasons, but make sure you have enough stamina to swim inland. You don’t want to be caught beyond the point of no return without enough food in your belly to make it the rest of the way there.

What to Do With The Drunken Sailor 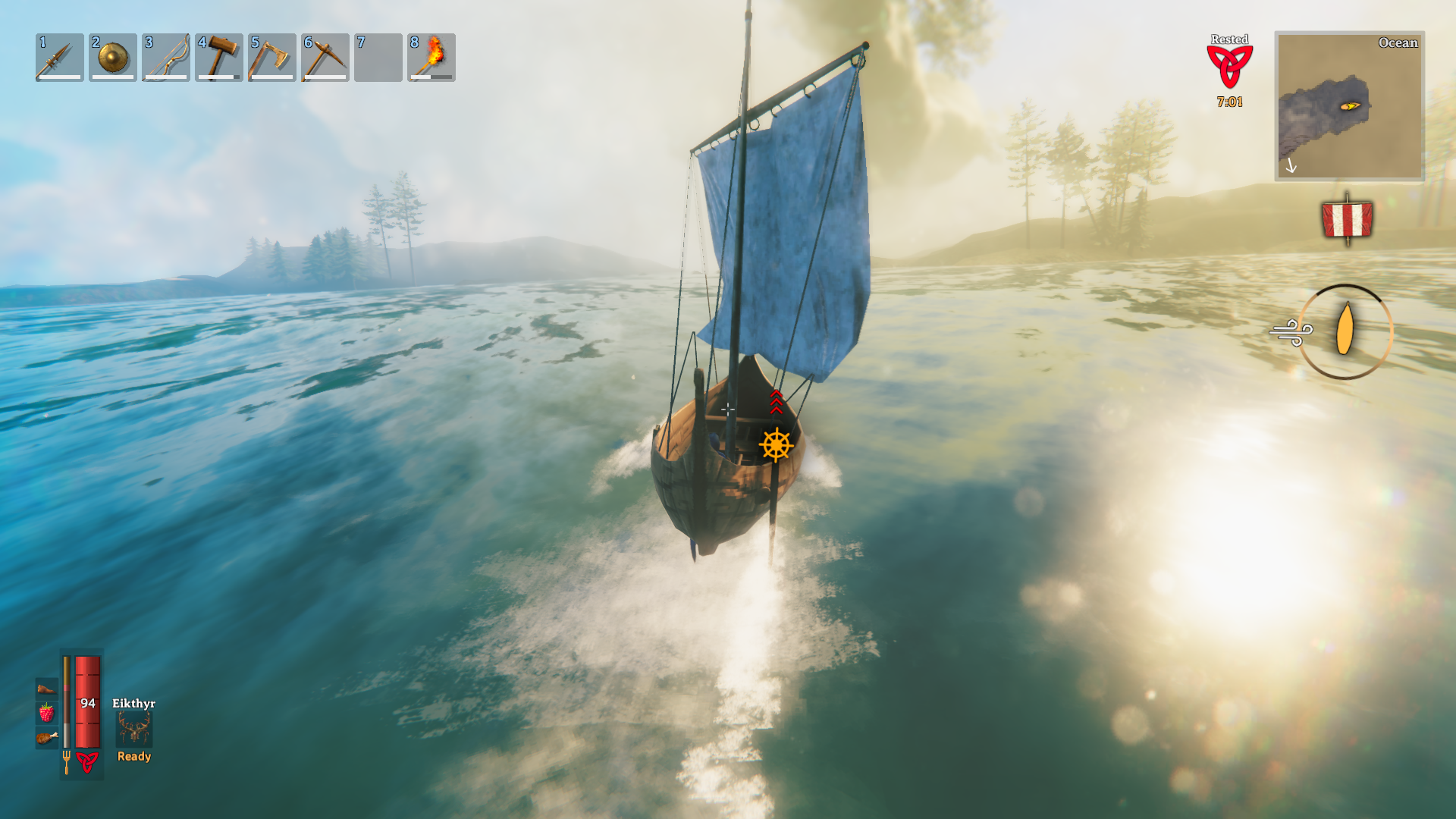 Once you get to the new shore, it's up to you what you want to do. Still, there are a few tricks you can take with you to make the new island more friendly. However, the first thing you should do is scout the land immediately around your landing for any particularly dangerous creatures or valuable goods. Trolls might be present that could pose a threat. Also, check what biome you are in as well. If you’ve accidentally sailed into a swamp, you might want to turn around until you’ve defeated the Elder.

Once you’ve got the lay of the land, you’ll want to make sure you can come back here. At a minimum, you’ll want to create a small room with a bed and nearby fire so you can respawn here if the worst should happen. It might be that this island is slightly outside your comfort level, but you’ll still want to be able to take your boat back to home base if that’s the case. If all goes well, your little tent might evolve into a full-blown settled town as you begin to conquer Valheim.

The more expensive option upon landing on a new shore is to build a portal for yourself. While you won’t be able to bring back metal from the new world, and someone might have to sail the boat back, this will greatly increase the speed you can travel between the islands and help build a unified network of towns that can be exploited by the adventurers going forward.

Portals require two Surtling Cores as well as Greydwarf Eyes and Fine Wood, making them probably one of the most expensive things you build when you first begin exploring. If you want to do this, scout the land thoroughly before putting down the Portal and make sure it has everything you need to make such an expensive structure worth it.

Here There Be Monsters 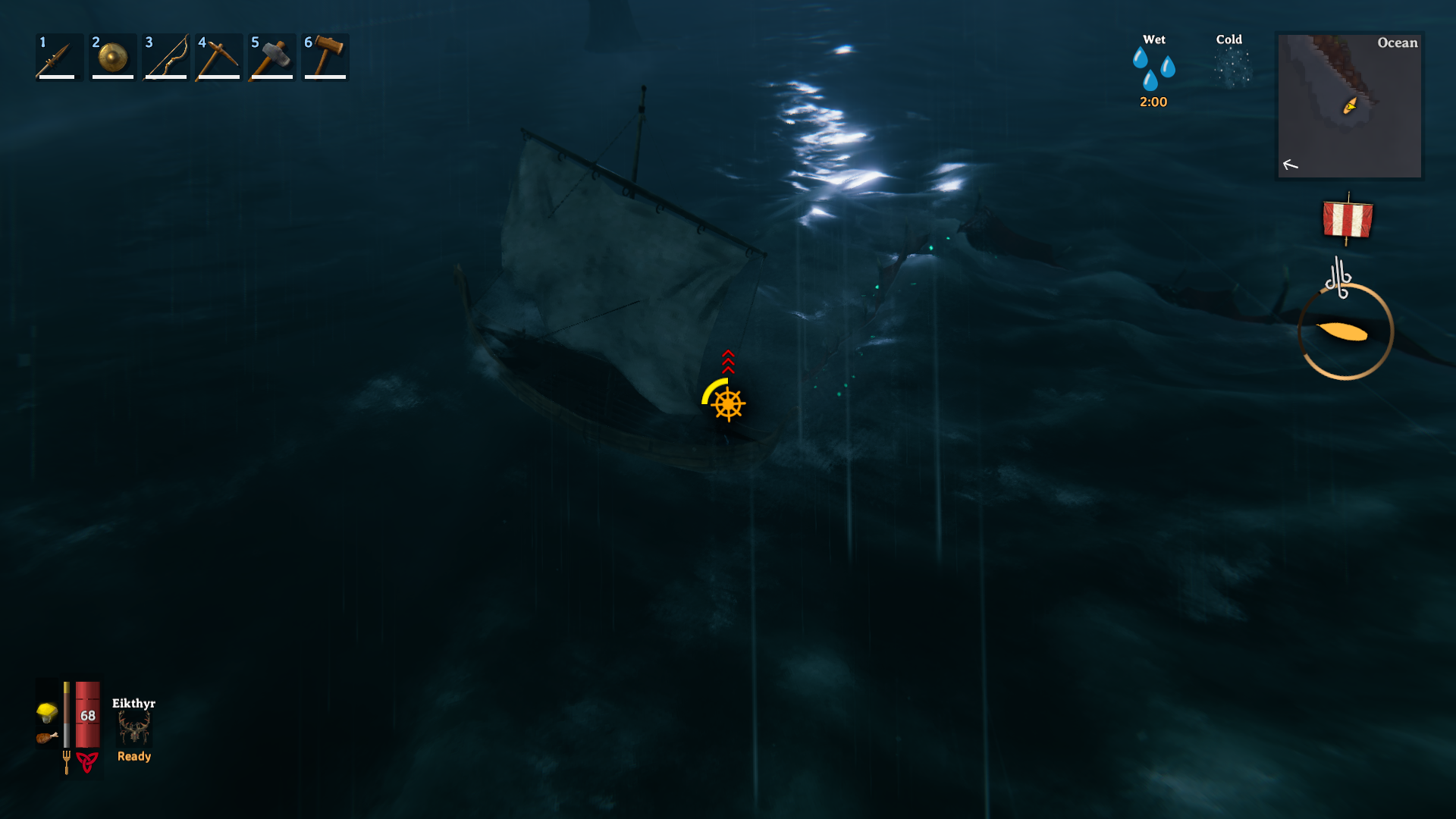 There is only one monster found in the Ocean Biome, but that does not mean the ocean is a safe place to explore in Valheim. The Sea Serpent is a huge snake-like creature that goes instantly hostile. It seems to appear more regularly in storms than at any other time but can spawn at any time within the Ocean Biome, requiring Viking sailors to always be vigilant.

Thankfully, it doesn’t stray too far from its starting location, so you can attempt to escape its wraith should one spawn while you are unprepared. Otherwise, it can easily destroy a raft and, although slowly, will happily destroy a Karve unless you can kill it first or flee the area.

Fighting this particular beast is best done with arrows since swimming is already such a drain on your stamina. You’ll want a Finewood Bow and at least flint arrows to start doing reasonable damage to it. More importantly, you should not engage with a Sea Serpent on your own. If you are acting as a lone explorer or courier, flee when one such creature presents itself.

More advanced players might start to hunt Sea Serpents for their meat and scales, often in a Longship with Abyssal Harpoons to control the best, but until that point, consider the beast a force of nature not to be battled but to be respected.