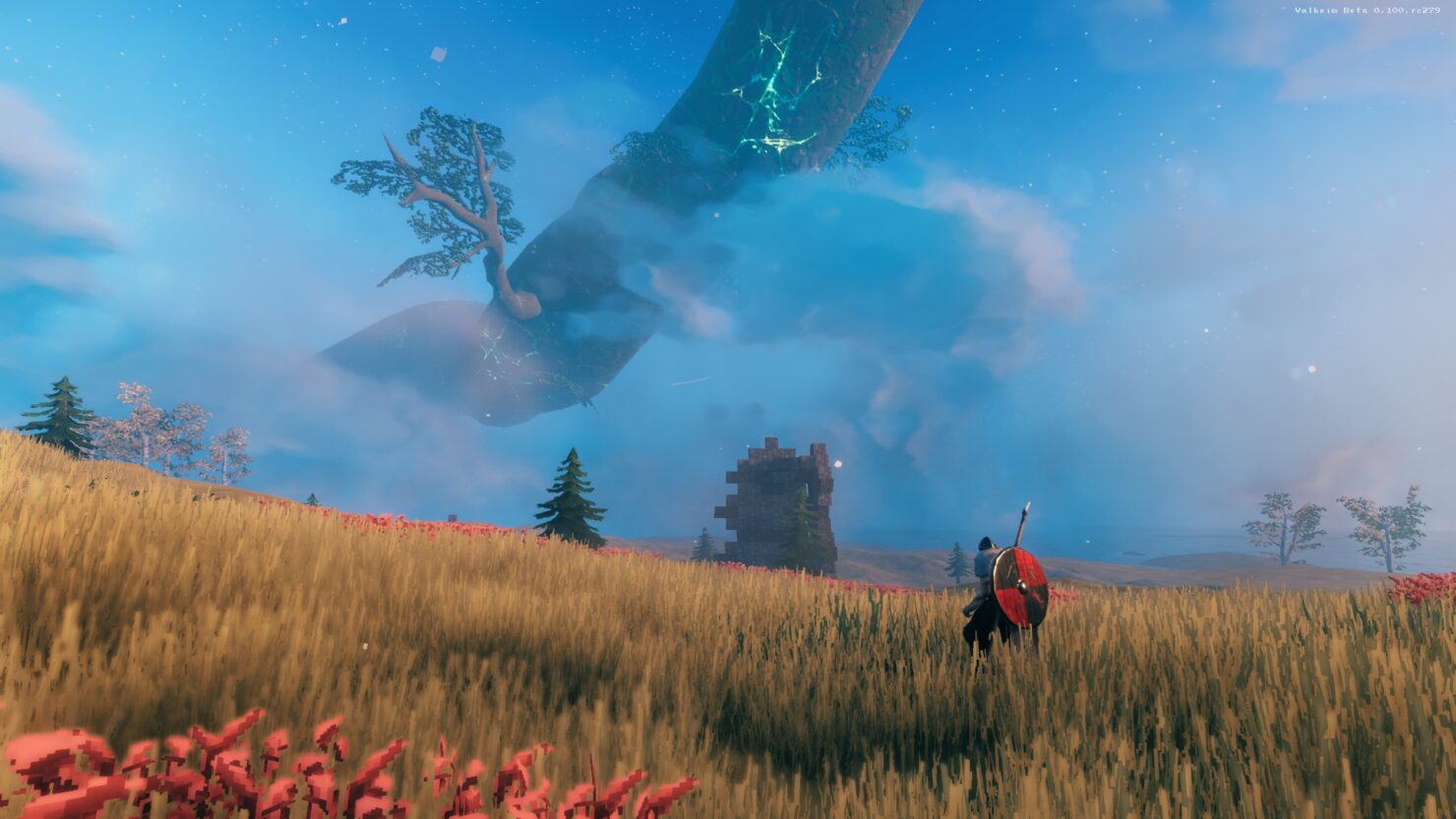 You’ll begin Valheim by gathering from your slain kills to equip yourself with armour, weapons, and supplies. But as you explore further from the meadows you’ve probably built your home in, you’ll start to find metal deposits just begging to be smelted into armour and weapons for your noble Viking.

But finding a way to utilise these deposits can be more than a little overwhelming since Valheim doesn’t exactly explain what you should be doing some of the time. This guide will walk you through how to start working with Bronze, the first proper metal resource in the game, as well as some tips on what you’ll want to make with it first. 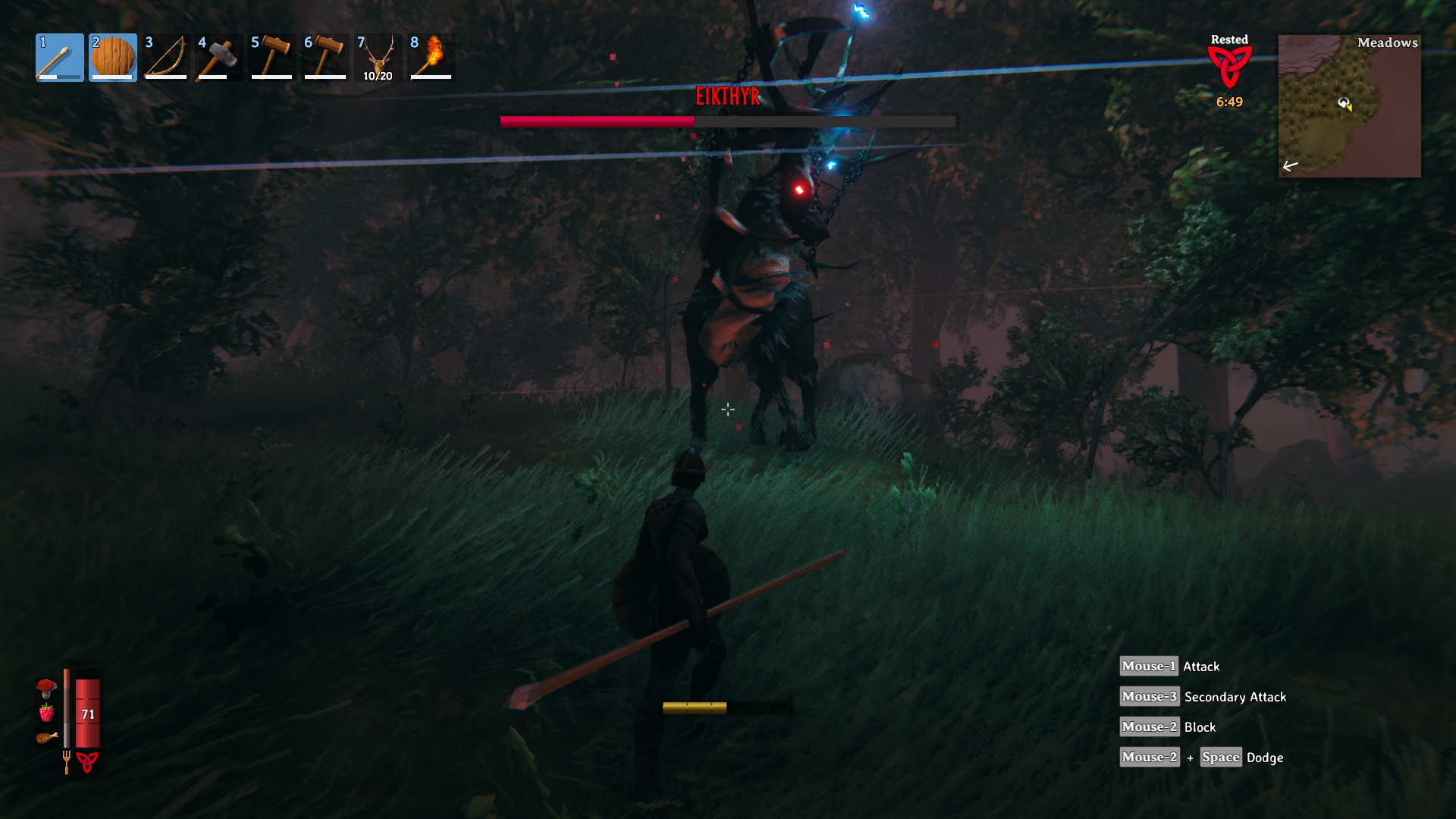 Mining in Valheim doesn’t happen at the start. Your home will be made of wood, your armour of hides, and your weapons of flint. But metal won’t be too far out of reach. Once you’re coated in Deer Hide and running around with a spear or flint axe, you’ll be about ready to face the first boss Eikthyr.

Check the glowing red stone by the stone circle you first arrived at to get the location of the Deer Lord marked on your map, then head to the altar and place two deer trophies down to summon him. Once he has arrived, you’ll be locked in a battle with a lightning powered creature. The fight isn’t too difficult but make sure you’ve got as much health as you can muster and a shield to block some of the damage.

Once defeated, Eikthyr will drop Hard Antlers, which is exactly what you need to go mining. Take them back to the workbench with a little wood, and you can make your first pickaxe. Although not the most effective tool, it will allow you to break up rocks, tin and copper deposits from the Black Forest. 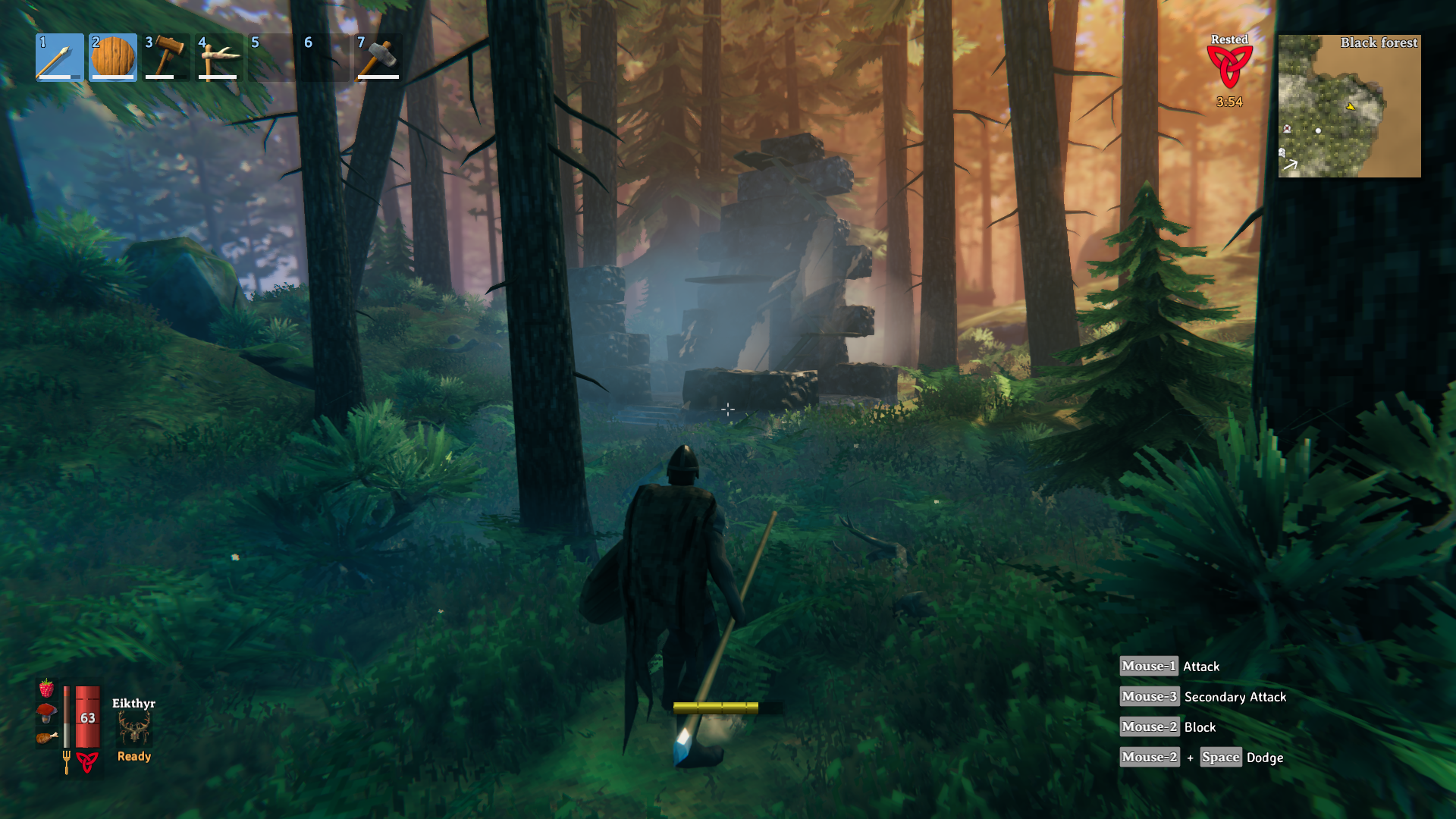 But while you can start extracting the ore now, you won’t have anything to do with it until you build a smelter.

The Smelter can be built with twenty rock and five Surtling Cores. The rock will be easy enough to gather, especially with this new pickaxe of yours, but the Cores can only be found in the Burial Chambers scattered through the Black Forest.

These dungeons are deadly and difficult for your leather-clad Viking, so proceed carefully after you’ve found them. You're going to need ten Surtling Cores to begin effectively processing bronze, so hunt the dark places of Valheim until you’ve got that many.

Then you will need to build a Smelter and Kiln. It might seem that the kiln is pointless when there are other ways to produce coal but trust me, the time difference makes it completely worth it. Once you’ve got some coal, you can begin smelting your ore.

Start by smelting the copper since you’ll need six bars to make the forge. Once that's done, you’ll want to smelt two copper ore for every tin, as that is the ratio needed to make Bronze at the forge. I suggest you fill the smelter with seven copper and three tin each time you fill to make bronze as quickly as possible. 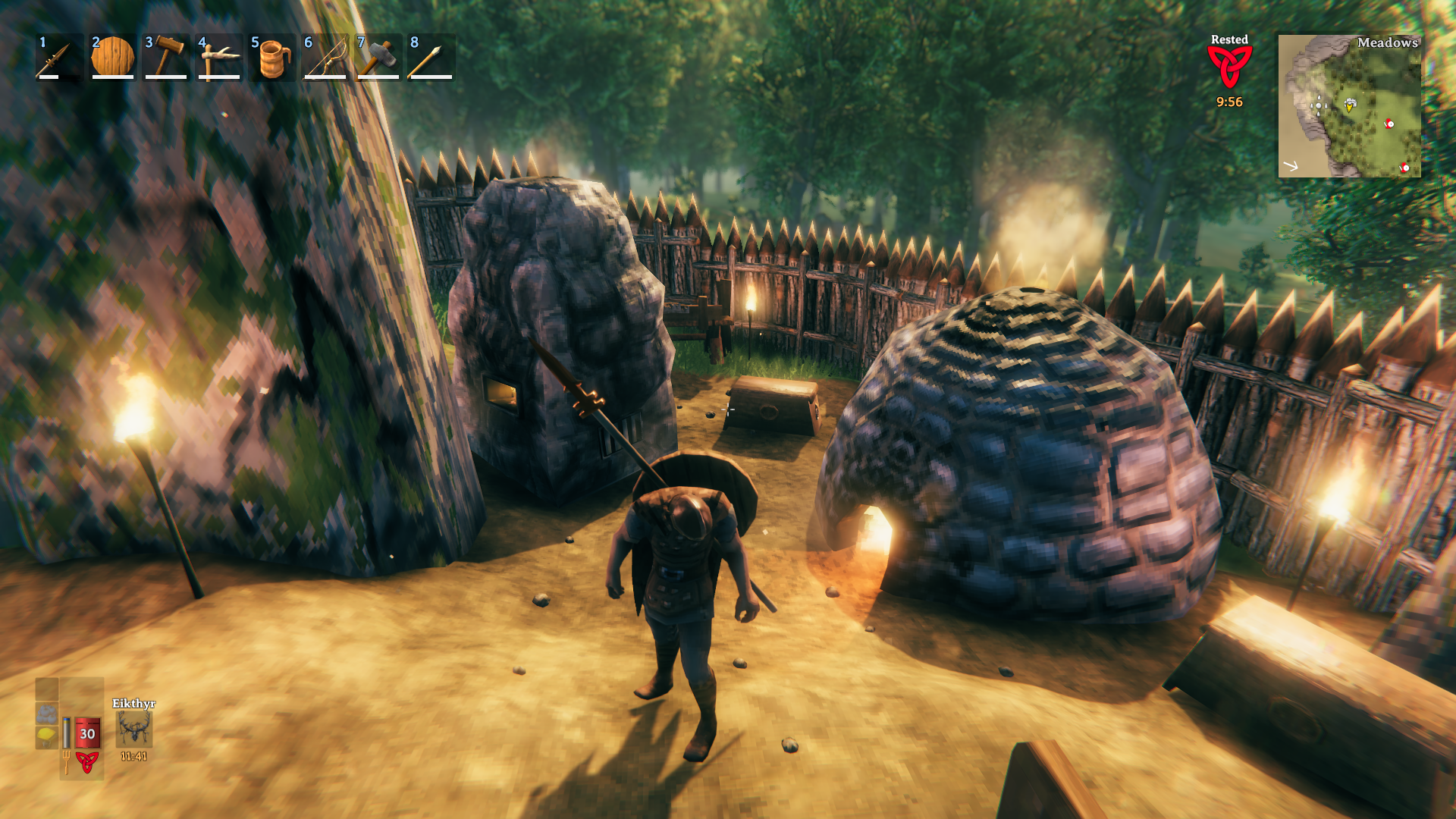 Once you have the forge, you’ll have unlocked so many new recipes you might have no idea what to do with them all, and the game doesn’t provide many clues.

I’d recommend you start with a bronze axe when you get the chance. This can be a reasonable weapon in a pinch and greatly improves your chopping time but more importantly, it allows you to chop down those Birch trees that your flint axe couldn’t. This Fine Wood unlocks another rush of new recipes, including the Portal and Finewood bow, which you can also start looking into.

Secondly, it's time to improve your weapon. Once you’ve got the axe you’ll want to make something better at killing the enemies you’ve already met. What weapon you want is entirely up to you, though it should be dedicated to killing like the sword, mace, or spear. It should not be a tool that has two uses as the axe.

After that, you’ll want to move away from foraging food as you have been doing up until this point. A Cultivator opens up the farming mechanic and is incredibly useful for producing better and consistent food. Hopefully, you will have already found some carrot seeds in the Black Forest to begin your Stardew-esque journey. If not, you should venture in and look for white flowers.

You’ll also want to make a Cauldron to begin cooking up the food you farm for an even greater effect on your health and stamina. This particular appliance costs tin instead of bronze, so you might want to do a smelting session of just tin to acquire the necessary materials. 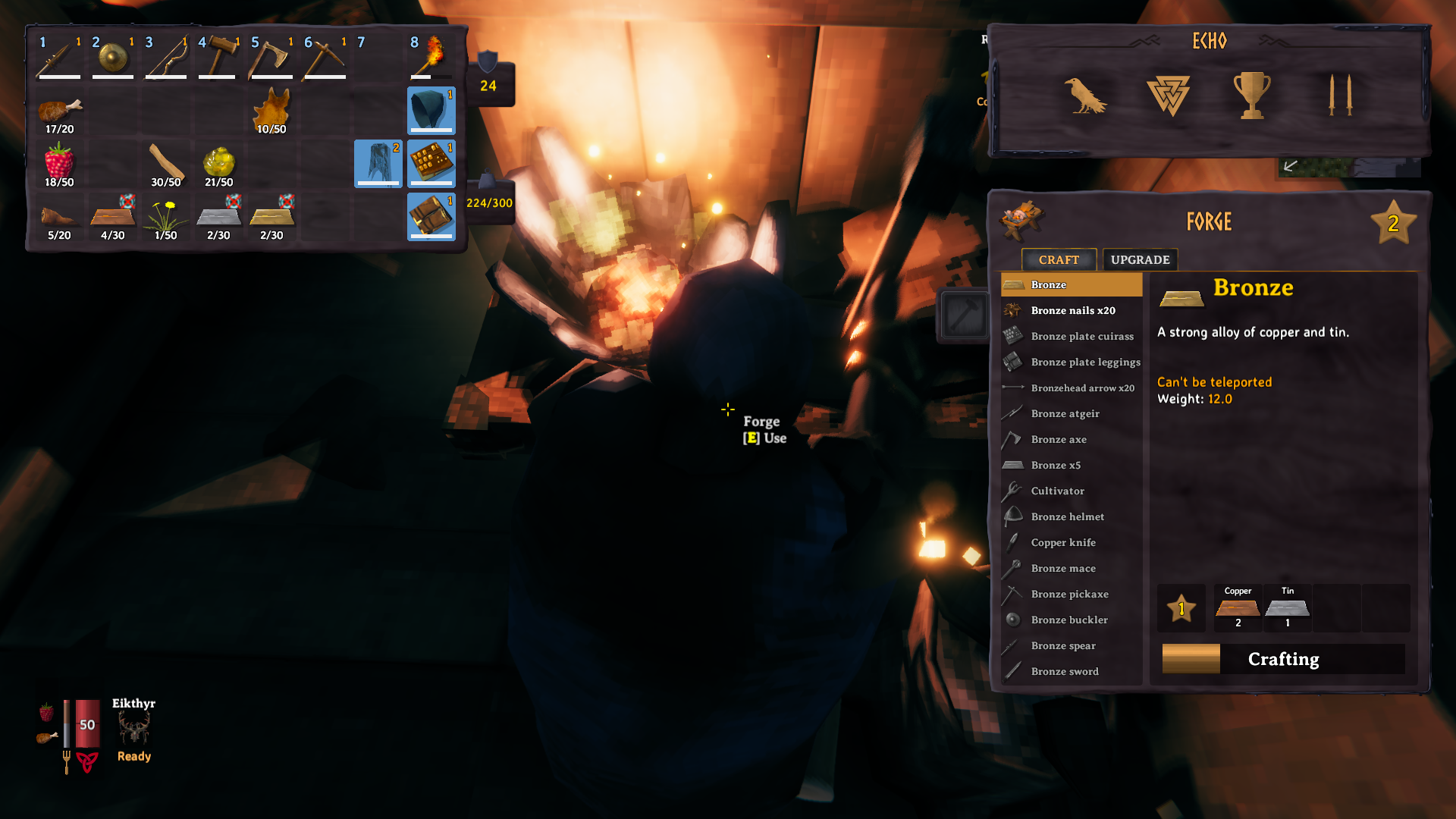 Once you’ve all these essentials under your belt and in your home, you can start to look at expanding out. Decorating your home will improve your comfort and resting time in Valheim, meaning your stamina and health will revive quicker. That’s worth investing some metal and time in. Likewise, building some fine bronze armour for yourself will help you survive in the dungeons, forests, and troll battles as you explore more of the map.

And don’t forget about making some nails. These can be used to craft a cart that will greatly improve your mining capabilities or a Karve that will let you explore the waters more. Once you’re comfortable with all your bronze constructions, you should start looking at hunting the Elder and gaining access to the next deadly Biome, the Swamp.