It was only three months ago that I posted about Ubisoft (EPA:UBI) posting record profits in the first quarter of the current (2021) financial year. It shouldn't come as a surprise that these companies are still benefitting from the same situation that they have been benefitting from since March, that being COVID-19, despite the fact it often goes unmentioned likely due to companies wishing to push the narrative that it is the strength of the business, not the climate caused by the pandemic.

There is no doubt that the games industry is going from strength to strength, but no industry has been able to capitalise on the current situation like video games. People are staying at home, not going out, and need something to do. Ubisoft CEO and Co-Founder, Yves Guillemot, has made a statement that seems to ignore the elephant in the room:

The videogame industry is benefitting from very strong momentum. It is by far the fastest growing segment of entertainment and is driving unprecedented consumer engagement and social interactions. In this context, our strategy and competitive advantages continue to be fully validated by recent industry announcements of consolidation and new platform launches. The value of videogame IPs has never been so strong and these announcements highlight the importance of owning a deep and diversified portfolio of high-quality franchises. Thanks to this major asset, which we have built up organically over more than two decades, Ubisoft has entered into fruitful partnerships with the biggest technological and videogame platforms, who are all thrilled to onboard our content.

At the same time, we continue investing to increasingly leverage our direct-to-player relationship. Over the past ten years, we have built our proprietary online distribution and services ecosystem, our unique identifier across games and platforms and our unparalleled production capacity. These are formidable assets for strengthening this direct relationship. Through multiple entry points and business models, and with the introduction of Ubisoft Connect, we aim to offer players frictionless access and enriching experiences across our full catalog of games. This will expand discoverability, traffic and global engagement to ultimately provide meaningful value for our players, our teams and our shareholders over the coming years.

The only mention of COVID-19 in the earnings release seems to be with the announcement of Ubisoft delaying Far Cry 6 and Rainbow Six Quarantine as a result of "production challenges related to work from home", which will include but not be limited to issues like infrastructure, inability to communicate directly and difficulty in enforcing crunch conditions.

Quite simply, the massive first-quarter has simply been boosted by a strong second quarter. Q2 has seen net bookings of €344.7m, bringing the first half of the FY to €710m, a significant increase on last year's €661.1m. One of the most interesting parts of the figures, however, is how large the operating margin is. Currently standing at 15%, this is a record high for the company, driven by the current pandemic and huge sales of Ubisoft's older titles, as well as reduced marketing expenses, as well as reduced R&D costs.

In addition to the strength of Ubisoft's older titles, the company puts a lot of praise on the strength of live services. Titles like Rainbow Six Siege and For Honor have shown over the previous years that long-running titles that are supported over a prolonged period of time can truly bring massive numbers of players on board. Rainbow Six Siege, for example, hit 65m registered players and a cumulative €2.5bn in lifetime player spending.

On other titles, Assassin's Creed: Odyssey is also seeing a large increase of sales, player engagement and PRI (player recurring investment - that is to say sales of microtransactions, loot boxes, subscriptions and the like). The Division, For Honor and The Crew 2 have seen a YoY (year-on-year) double-digit growth of net bookings, with Brawlhalla actually doubling YoY net bookings. 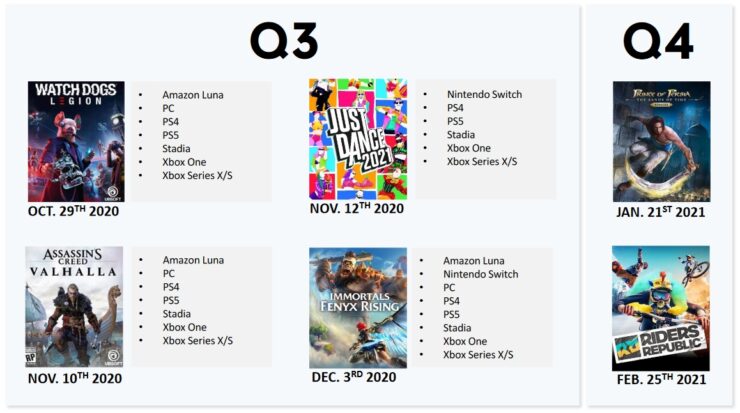 As previously stated, Ubisoft has reduced the outlook for the current financial year, though it is still within the margins first set. If it wasn't already clear, this is still perfectly feasible as the longer people stay in lockdown, the more they turn to video games as a means of escapism. Furthermore, the pending launch of the new generation is also likely to lead to further interest due to the simple cycle where older generation consoles get sold cheaper to fund the purchase of a new console, making it more affordable for people to come in.

This will benefit Ubisoft, as it will all companies. Ubisoft is also in a strong position to benefit from this as a result of the uPlay+ (now Ubisoft+) subscription service, allowing people to pay one simple price to access all of their titles. In addition to this, the expanding of uPlay to Ubisoft Connect, bringing it to all platforms and expanding it to a cross-platform service allows those with a basic account, and the Ubisoft+ subscription, to essentially take their games anywhere they go, across any supported device, making it a more valuable proposition.

Ubisoft Connect and, by extension, Ubisoft+ has also been expanded in value by the earlier announcement that Ubisoft has partnered with Amazon for the subscription service to work on the Amazon Luna streaming service, which is currently in beta in the United States. In addition to this partnership, Ubisoft also recently announced a partnership for a different medium: Ubisoft and Netflix will be releasing a live-action Assassin's Creed TV series.

Finally, even with the two high-profile delays, Ubisoft has a strong line-up of titles for the remainder of the financial year. Watch Dogs: Legion was released just yesterday. Assassin's Creed: Valhalla will now see a sizable boost as a result of Cyberpunk 2077 having delayed its release until December and in early December, Ubisoft will be launching Immortals: Fenyx Rising. Smaller titles like Just Dance 2021, Riders Republic, and the Prince of Persia: Sands of Time Trilogy remaster could also prove to be strong sellers for the company.

All in all, even with the delays, the current climate and strength of new and upcoming releases, as well as a thriving back catalog, means that Ubisoft is one to watch.