Let's start with the simple; here's the teaser trailer:

So what do we know about Total War: Warhammer III so far? We know that this will likely feature the largest campaign of any Total War to date, incorporating everything from the first two games. Now, this will most likely come after launch, so what about the first campaign?

We know that this will span from "the mysterious Lands of the East to the daemon-infested Realms of Chaos." We also know that Kislev and Cathay will feature in the game. While Creative Assembly will alter the map to suit the game's needs, a look below can give an idea as to where this game could expand to and from. In line with the size of Mortal Empires, we could see everything from The Dark Lands to the eastern sea, potentially also Nippon, if the map expands far enough south. We didn't see the Southlands in Warhammer 2, so there is always the chance of not seeing Khuresh.

How about the realms of chaos? Considering these aren't directly linked by land or sea, my guess is something similar to Empire: Total War will be put in place. Two separate maps. That's my guess. Only here you'll gain access through warp portals placed at points on the map, letting you transport to the realms of chaos. Being the realms of chaos, we're likely going to see some of the biggest and most fearsome monsters of the trilogy. 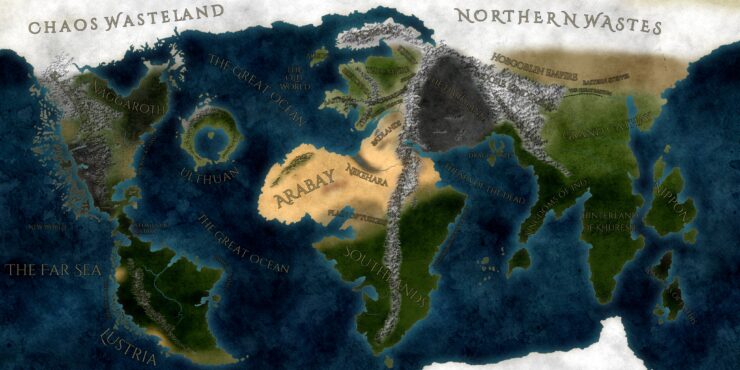 As for the story campaign, all we have been told so far is that each faction will have its own unique story:

We'll find out more on the 13th of May when more gameplay will be revealed for all to see.