Normally when reviewing a game I create a little sub-heading that's a take of sorts on the game. It may be relating to the setting, a game-mode or just a platitude that somehow related to it. On Saturday I was talking to a member of Creative Assembly while at EGX about Total War: Warhammer II. I gave away the general gist of the review and said: "Simply put, it's bloody good".

And it is. That's the main thing you need to know from a review. Is the game good or not? Well, Total War: Warhammer is. It's more than good. It's bloody good. This is despite misgivings you could rightfully have about the game. Even I had some when it was announced. This is a one-year cycle in a series that generally sees two or three years between core releases. Fortunately, the game has improved on faults from its predecessor (review here) and has so much to show.

I'm going to disappoint here, but my main playthrough in Total War: Warhammer II hasn't been with the Skaven. As lovable as those plague-ridden skamps are, playing as a horde of bipedal dinosaurs took my fancy and the Lizardmen fit that bill perfectly. It's the characterisation that really shines through in this iteration though. Prior to the DLC, the first game didn't really have anything unique, from a fantasy standpoint. Humans, Dwarves, Undead and Orcs. Not exactly straying out of the box. This is where Warhammer II comes along and really starts to make use of the IP it works from.

Featuring the base races of Dark Elves, High Elves, Skaven and Lizardmen, you start to see something unique. The Elves are just that, Elves. Move along, nothing to see here. The Skaven and Lizardmen though, this is what Warhammer was made for. To be precise, I took on the challenge of the Last Defenders and quickly became the scourge of the Skaven, destroying Clan Mors.

Despite being simply cool to watch and fight with, the new factions in Warhammer II also feature a variety of unique features. The Lizardmen, for example, control something called the Geomantic Web. As your settlements develop and grow, the web develops with them. The web draws powers from cities you don't control, though the power level does depend on the strength of your relationship with the owning faction. The web can then power up the commandments used in provinces. In addition to this, certain units of the Lizardmen can rampage during battle. This can be surprisingly useful and send fear into the heart of enemies, though you lose control of the unit.

Skaven and Dark Elves also feature interesting aspects to the factions. Skaven cities all appear as ruins to other factions, allowing for sneak attacks should they be brave enough to investigate what appear to be ruins. In addition to this is the ability to move armies in the campaign map below ground, letting you outflank the enemy and strike where they're weak. As well as this is the use of food as a separate currency of sorts. Food gives either positive or negative effects depending on the quantity you have. It can also be used to boost recently captured cities and also in battle to spawn units using The Menace Below.

There are a number of general features that affect all factions that greatly enhance the campaign side of Total War: Warhammer II. First and foremost is the Vortex campaign itself. While it isn't the first Total War to feature a directed campaign (Alexander, Napoleon and Atilla all had this to an extent. This is the first to actually place you in a race of sorts against the enemy. Each of the major factions is tasked with building up a specific resource to activate rites. These stabilise the Great Vortex and once all four are complete, that faction is left in control of the power that the vortex holds. Should you not be the first to reach the fourth rite you can enter a last ditch battle, lost this and you'll encounter the first ever Total War 'game over' screen.

Putting a stop to every rite is possible. When one is activated it sources power from three cities, so simply taking one is enough to stop the rite. With a world this vast, that isn't always going to be simple. An AI army of the chaos faction is always positioned near the activated cities. In addition to this, you can also buy an AI controlled army to attack one of the cities. This is particularly useful if you have a strong economy and can afford to drop anything up to 10,000 gold in an attempt to hinder the enemy. From experience, this sadly only seems to stop a rite a quarter of the time.

Sticking with the size of the world is actually where Total War: Warhammer II's best new feature comes in. In the first game, factions were only able to capture specific cities. This limited the game a little too much, fixing how much you could eventually expand. Now there is a climate system in place. The cold-blooded Lizardmen, for example, love wet and warm tropical conditions. However, they'll start to suffer negative effects if taken out of this, to severe effects if taken into the icy cold of the north. The world in Total War: Warhammer II features a huge variety of climates and regions to control, from lush jungles to dry deserts and everything in between.

What has also worked in opening up the campaign map and giving more emphasis to exploration is the inclusion of ruins, sunken ships, mysterious islands and more. Delving in ruins, for example, can lead to impressive rewards of a not insignificant amount of gold or a strong item. It can also lead to negative effects should you choose the wrong option offered. A number of these events take part in a mini choose-your-own story style event where you select the route you wish to take. Whatever you do, don't wake up the giant spiders.

One area that has seen slight improvements in Total War: Warhammer II is the battle system. A lot of this is to do with the large improvement in the animation of units. All too often could one faction's general infantry feel just like another’s. While you will always notice the difference between such as a Lizardman and a Skaven, even the similar High and Dark Elves have a personality of their own.

This always shines through with the special units of the faction. From the gladiators of Rome to the giant flying beasts of the first Total War: Warhammer, nothing has taken my fancy as much as the Carnosaur. Particularly the feral version. The fluidity of its movement, how it will charge into battle and literally jump up, swinging its tail while it crashes down on the enemies. There's something overwhelmingly endearing about it and it's a sight to behold when you have a number of them charging into battle.

With these personalities and, thanks to the rites and missions, each race also gets something a little unique. The Skaven can create earthquakes. The Lizardmen feature blessed versions of particular units. The Dark Elves, though, have a special floating city called the Black Ark. Or, I should say, multiple floating cities. These have a few building options but can effectively act as a way to churn out armies’ right on an enemy’s coastline. More than that, provided it's in range the Black Ark can be used in battle to bombard the enemy.

Working with the improved factions is what feels like a significantly improved battle AI. Luring the enemy into traps seems considerably more difficult. They'll use range and height to their advantage a lot more than before. The only thing I haven't seen them do is dynamically use terrain cover, like trees, to their advantage. Once these slight niggles are improved I can't see there being much room to improve in the Total War battle system bar bringing back naval combat.

There is, however, still room to improve on the campaign AI. Gaming the enemy using diplomacy is still too easy. Declare war on a weaker enemy, demand peace for a price, instant cash flow. Had a long-time ally that's blocking your way, war at no cost. There's just something a little too textbook about it, where nothing seems remotely lifelike.

Economy and city development is something that also follows this trend to an extent. While expanded from the first game, which featured possibly too few build slots, there are still limitations. Using the same extortion tactics listed above, you can easily fund an empire with a negative cash flow. On the other hand, should you limit to only one or two frontline provinces as military building, while the rest solely focus on the economy, it's easy to build a huge pot of gold and simply buy your troubles away.

Some of these building slots will, however, be used to build things that open up your tech tree. The technologies you can research aren't the huge developments you may find in other strategy games. You won’t find a technology that unlocks a super unit or anything of that sort. The technologies revolve around slight, but noticeable improvements. Plus five to a particular unit types speed. A price reduction to certain units. Also, the incredibly useful addition to public order that keeps the masses at bay.

For those looking for a less directed experience, something brilliant will be coming your way. This is the case if you own the first game, that is. Creative Assembly will be releasing the 'Mortal Empires' campaign shortly after launch. This will bring together the maps of both the first and second game and allow you to play as any of the factions, including those bought as DLC. This will inevitably lead to Total War's largest and most diverse lineups on one of the grandest scales yet.

For new players, Total War: Warhammer II is one of the most accessible titles in the franchise yet. More than that, it hasn't lost the level of strategy and tactics that makes the game great. The directed campaign acts as the best entry point to the franchise so far. While Total War: Warhammer II still has some of the minor issues and annoyances, particularly the campaign AI and the ability to game the economy, Total War has never been this good. 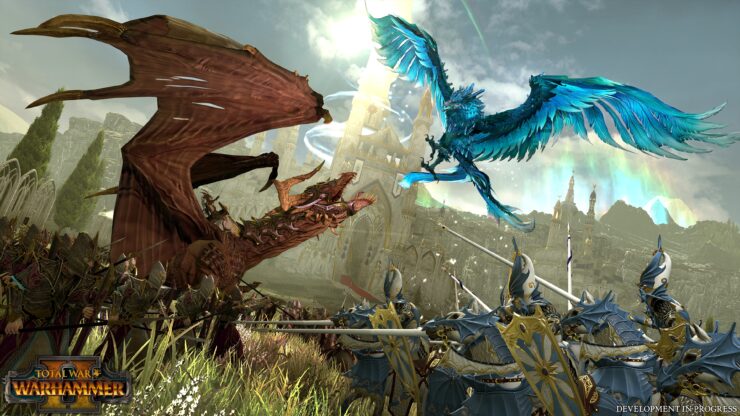 Total War: Warhammer II takes the fantasy setting to its next logical level. Bringing in completely unique factions, giving them all a personality of their own in the franchises most focused campaign ever has led to an incredibly compelling game. The only problem is that the old Total War issues of poor AI with diplomacy still prevails and that the economy is easy to game to your advantage. Still, altogether an outstanding release.