Until now Total War has always been a franchise directly focused on reality and history. From early Greek times, to the more modern colonial America, you always knew what to expect. Thousands of troops littered historical battlefields, your tactics were always based on something you could happily read in a history book, recreating feats from the greatest generals. Here, with Total War: Warhammer, it's taken a turn to the fantastical.

Raise the dead to have them fight alongside you. Send in huge creatures that dominate the battlefield, from trolls that club enemies to death with weapons the size of cars, to flying monstrosities that have made their way straight out of your nightmares. Some leaders even have the option of riding into battle on a mount, the vampire lord general having the option to dominate the battlefield from the back of a giant dragon, for instance. This is Total War as you've never known it, and it works so well.

It shouldn't come as any surprise that Warhammer and Total War are a natural fit for each other. You only have to look at mods for previous entries, where mods have been hugely successful, to see that this game was going to work, and be popular to boot. Warhammer is all about strategy and the huge variety of units, particularly the entry of aerial units into the franchise, has opened a door that will be hard for Creative Assembly to close.

What really helps with this game is that the factions of Warhammer lend themselves well to a grand strategy game. For somebody wanting to play as something familiar, you'll not go far wrong in selecting the Empire, who are as rigid in command, and as large as the Roman empire ever managed to be. The empire faction also brings back the ability to place your lords into an office, granting further bonuses. Dwarves are the other faction that will offer something similar to a traditional Total War game,  just adding variety in them having a unique campaign objective in grudges, which means that any action taken against you will have to be resolved before you can declare ultimate victory. In addition, the Dwarves, like the Greenskins, can take subterranean paths and fight there, adding a further dimension to the series.

The aforementioned Greenskins, and the Vampire Council, are where the factions of Warhammer really take this Total War into a whole new level. Acting much like the barbarian factions, though somewhat more organized, from such as Rome: Total War, the Greenskins are the fighters faction. As they fight, a 'fightness' meter builds and filling this generates extra support with an allied 'Waaagh!' army spawning and joining the fray. Not fighting and winning damages morale so much that infighting becomes rife and the army collapses in on itself.

The Vampire Counts are my favorite faction of the game, offering a suitable defensive counterpart to the Greenskin all-out attack. The vampires need to spread 'Vampiric Corruption' throughout every province they maintain control of, as well as adjacent provinces they want to conquer, otherwise any troops sent there for even a short period of time will simply die from severe attrition. Acting much like a religion meter from previous entries, it allows for a more long-term strategic approach and required a lot more forethought than the other factions. Not only that, but as the vampiric corruption spreads, physical changes can be noted on the main map.

However, this option in factions underlies the core problem with Total War: Warhammer, there's just not enough variety in the campaign. Previous entries always offered a myriad of different factions, even if they were often based on each other at the core, it allowed for a different position and more challenges in how you would deal with different neighbors and less favorable starting scenarios.

Here, the limitations to four factions. Five, which includes Chaos, if you preordered the game or buy it within the first week, hinders Total War: Warhammer. While the factions are incredibly diverse, more so than any factions in any previous Total War game, only offering a small handful of starting positions will more than likely lend to a lesser longevity as only so much can be done with such a small base. Of course, this will inevitably be fixed through the simplest of mods, but expecting the audience to do what the developers wouldn't is never the way to look at things.

What hasn't helped is that there seem to be a few core issues that have still been carried over from previous total war entries, and other new ones that have decided to pop up to hinder the fun. Any long term fan of the franchise will know about the issue with generals and their AI. As before, they're more than happy to wade into battle into suicidal conflicts. In some respects, particularly for the Greenskins, it makes sense that the general would be as bloodthirsty and willing to fight impossible odds, but it's still disconcerting when the enemy general wades in front of his army, to the core of your troops and needlessly dies.

One other major issue for me, which is particularly tonal, is the economy seems to be broken. While you are more than capable of fielding a number of strong armies if you want to extort through diplomacy, raze enemy settlements and other alternative routes, you will be able to field a number of full, high tier armies while making a loss on general income. For the Greenskins, a society based on sheer numbers and aggressive means, this makes sense. Not quite so for other factions that aren't based on the same tactics.

This contraction of the economy does play into the hands of what Total War: Warhammer wants to be, a more action oriented Total War. A lot more plays into this sense of direction, the lords and the previously mentioned variety of units being the core aspects.

Lords have been given a more active role than in previous games. While they still act as a beacon to boost morale, they're no longer as easy to kill and act as some of the most fearsome fighters on the battlefield, particularly so when upgraded and levelled up. As they level you can give them extra passive skills for the campaign map, but more likely due to the sheer number of abilities, you will have given them active abilities for the fights.

These are particularly notable in the Vampire Lords, who have access to a wide range of aggressive and defensive magical spells that can boost your own armies or even raise the dead of a unit to bolster their numbers. More aggressive skills can act as a means of slowing the enemy, lowering their offensive and defensive capabilities, to ones that directly damage and kill enemy units. Every ability, when used well, can be an incredible tool to change the tide of a battle.

This importance of skills, however, pales to the usefulness of the new unit varieties. As mentioned before, this is the first total war that aerial units have made an appearance and saying this is anything short of game-changing is an understatement. It's impossible to set up a defensive line in a battle, particularly if you're not stocked with a wide number of ranged units, and assume that you're ready for any attack. Dwarven Gyros, Vampiric Gheists and more mean that no unit is safe from above. This is particularly true for the Vampire Counts as they can't field any ranged units, meaning the only defense from flying units are their own flying units.

Adding onto what feels like a strong change in gameplay is  an exceptional looking game. Creative Assembly have made the most aesthetically appealing Total War yet. While the average footsoldier, grassy field and forest haven't improved that much from previous titles, what makes Warhammer look so much better is the variety and colors. Special attacks, sending gassy clouds or magical blasts, combine so well with huge lumbering creatures, flying dragons and the hordes of soldiers that march along snowy fields, barren wastelands and the swamps that lead the way to unique strongholds, each one different to the next.

The performance is also great so far, as you can see on the gameplay footage below, even without the proper drivers released yet by AMD and NVIDIA. DirectX 12 support has been delayed and will be added post-launch, but it should bring further performance gains so that everyone can join the game at its fullest.

Total War: Warhammer may be a more streamlined approach to Total War, it may be lacking in factions and the grand strategy that marked the previous entries in the franchise, but it more than makes up for it with such a unique entry that takes on the Warhammer mantle. The battles are huge, the tactics are even more important now that the sky has become an extra line of attack and defense, and this has made Warhammer a standout success, in an experiment that could have so easily gone wrong. 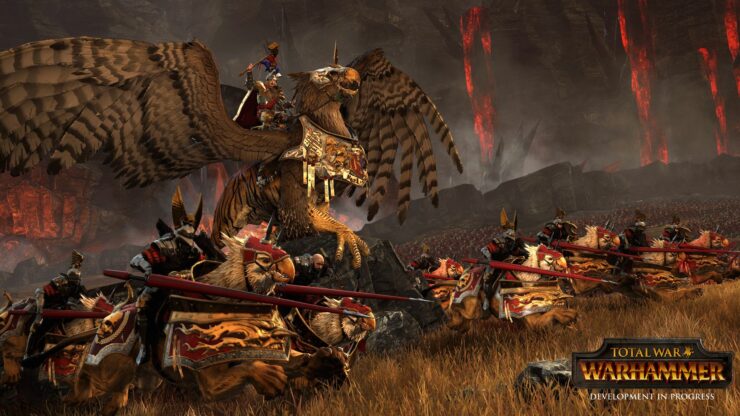 Total War: Warhammer is quite possibly the most exciting strategy game to come out in a long time. It's a huge change for such a long running franchise, brings in so many new features that work so well, and looks downright stunning as huge numbers of fantastical creatures create all manners of havok across the battlefield.