Yesterday a new video shared by EA Brazil revealed that Star Wars Battlefront, the game based on the Star Wars franchise developed by DICE, was going to include a new map set on Tatooine with the game's upcoming update. Today, however, a member of the team revealed that this won't be happening. 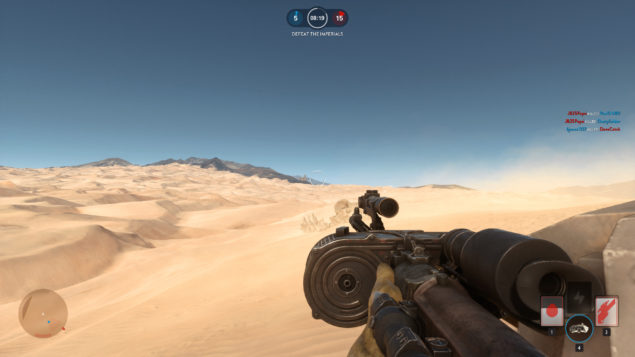 Earlier today lead lighting artist Oscar Carlen has confirmed on Twitter that the next Star Wars Battlefront update, which should be made available before the end of the month, will not include the new Tatooine map as revealed yesterday. According to Mr. Carlen, the video included some misinformation and for this reason it has been taken down. This is very disappointing, as Star Wars Battlefront definitely needs additional content as soon as possible.

@SWBFUpdates There were some misinformation so it was taken down. It is still a great patch, I dont think you will be dissapointed.

The full patch notes for the Star Wars Battlefront upcoming update have yet to be confirmed. Yesterday's video confirmed that Private Matches are coming, alongside new outfits for Luke and Leia and more, but with the video having been taken down due to misinformation, we cannot know for sure until we receive an official confirmation.

Recently DICE's lead designer Dennus Brännvall has shared more on the ability to play offline with bots. The team already has flying AI working, as it's already in place for multiplayer, and they're currently investigating on what they can do with soldier AI. Judging from everything that's been said, it does seem like there are some technical issues that will probably require some time to be solved.

Star Wars Battlefront is now available in all regions on PlayStation 4, Xbox One and PC. We will keep you updated on the next update as soon as more is said on the matter so don't forget to check back Wccftech for all the latest news.