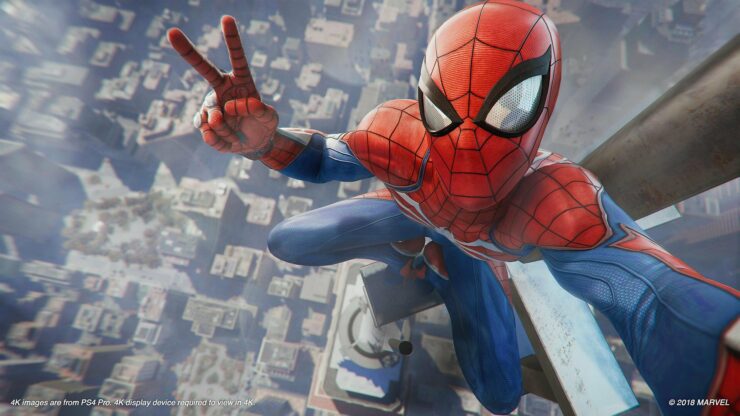 The cat is out of the proverbial bag as Insomniac Games, Marvel and Sony announced that the Spider-Man game for PlayStation 4 will launch on September 7th.

The latest Game Informer issue is also packed with new tidbits of information, and we've gathered some of the most interesting below after purchasing our copy.

Traversal has been one of the hottest topics after the previous gameplay demos and Bryan Intihar, Creative Director at Insomniac, explained how the developers have improved it since.

He's eight years as Spider-Man, so he's fine-tuned his traversal methods. We didn't want to stop the players' momentum at all. If you slam into a building, you run along it or up it, depending on the angle. When you get to the top, you have two options: you can just keep going, which will send you into a midair jump, or you time a button press at the top of the building to catapult you forward to keep your momentum going.

If there's a building down below, you can attach a downward web to keep your flow going. There's a physical aspect to all of it. It ends up being a different swing motion to get you back in range.

Of course, Spider-Man fans are all too eager to learn about his costumes and how they were designed. Jacinda Chew, art director at Insomniac Games, said the following about that:

lf you think about how functional athletic gear is, that's the same logic we applied to our suit. What it does to support you and allow flexibility, that's the same logic we used. You'll see our suit has a lot of paneling, like in athletic gear. One of the main things that's different about our suit than the classic is he no longer has a red boot. If you're a 23-year-old, you're probably not going to wear a red boot. We thought an athletic shoe would be more appropriate for someone that age. The other thing we did was think of the functionality of the suit. The blue is where the suit allows flexibility, and where he has the highest range of motion. Anything that is red is made out of a thicker material for armor reinforcement. It's where he might get hit the most, or where he might scrape against a building when swinging across the city.

The article also mentions a few additional suits (many more are expected to be available in the full game, with some brand new designs by the developers). Apparently, most of the suits will come with a signature power, though players will be able to move powers between different suits.

The suits will be crafted by Peter Parker himself, which makes perfect sense as he's a scientist; completing certain missions, including side content, will yield crafting materials useful for both gadgets and suits.

Below we added a recap of the suits mentioned in the issue.

This suit might look classic, but it turns our friendly neighborhood superhero into a 'steamroller'. Once activated, the power will make Spidey's hands glow fiery for a brief time.

The power is unknown, but you can take a look at the costume here.

This one is "buried under a sleeveless jean jacket outfitted with a dozen buttons" or so, and Spider-Man has a mohawk of spikes on top of his head. The power seems to be inspired by Insomniac's previous game (Sunset Overdrive), as it will have Spidey using a guitar to send out a spherical shockwave attack that knocks down all nearby foes.

Briefly mentioned, but we can't wait to see it in action.

Being a Spider-Man game where the superhero's and Peter Parker's worlds will collide, Mary Jane's role will be crucial. To that end, Bryan Intihar said that her arc is more than just cutscenes. She's a playable character at certain points with unique missions and gameplay mechanics.

Jon Paquette, Lead Writer at Insomniac, talked about her character a bit:

Like most of us, she started at the bottom, and she's really got to work her way up. She has to pay her dues. It's serendipitous that she has Spider-Man next to her and the stories kind of follow him, right? She's got a partner there, but it is also a complicated relationship. It's hard for them because they both love each other. They've been boyfriend and girlfriend in the past, but they're both really focused on their careers.

The article briefly reveals that the City Never Sleeps DLC (included with the Collector's Edition and Digital Deluxe Edition) will be a multiple drops initiative, each one featuring a unique villain and storyline and new missions, challenges and suits. The first one, set in a museum, is called The Heist and will focus on Black Cat. And in case you were wondering, there won't be any microtransactions at all in the game.

Last but not least, there'll be a level up system. Once you get enough experience points, you'll be able to unlock skills to improve his abilities (including the web swinging speed). Also, an interesting lore tidbit is that the Avengers Tower is featured in the game, though Insomniac didn't comment on any cameo from the renown superheroes.