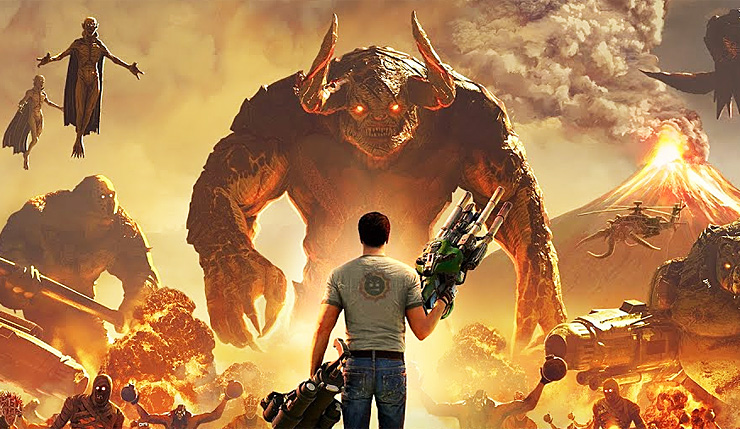 Serious Sam 4 is almost upon us, being scheduled for release on September 24th for PC and Google Stadia.

Developer Croteam, in the person of scriptwriter Jonas Kyratzes (of The Talos Principle fame), explained to PC Gamer that this time the B-movie type of story has been made more personal and more meaningful overall compared to past franchise entries.

It's not exactly that narrative is more important in Serious Sam 4. It's not a game that is structured differently than previous Sam games. It's not that we tried to take a Sam game and then make a narrative Sam game out of it, because that would be weird. It's more that it was an attempt to—without trying to disparage the previous games in any way—to do it better.

It was an experience that needed characters, a villain, a sense of events happening in the world. The thing was just to try to do it well. It's still a game that's primarily an action game, it still plays like any classic Sam game, it's just an attempt to also do the sort of B-movie kind of story that it does, but to do it well, to do it in an entertaining, clever, and hopefully charming sort of way.

This is more personal. The whole game is more personal. You've got your friends there, the stakes are more personal—its the whole Earth being destroyed obviously, but also the people you care about. You see Sam actually joking around with people, and he's still very recognizably Serious Sam, but he has actual friendships, he has people he cares about.

This is a completely sincere take. It's silly, it's goofy in places, it's serious in places too. It has moments of proper humanity, between the characters but also between what Sam stands for and what the villain stands for.

Are you excited about Serious Sam 4? Let us know below!