If sci-fi B-movie is your thing or if you simply like colorful retro esthetic, then take a look at The Deadly Tower of Monsters, revealed by Atlus and ACE Team. 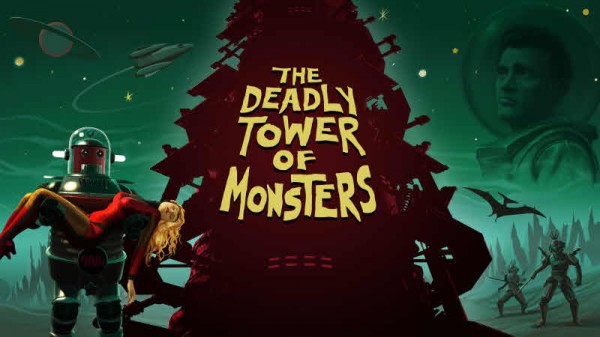 The action-adventure title will be out this Fall for PC and PS4. You can view the announcement trailer below:

An Incredible Work of Super Science-Fiction from ACE Team

HOLLYWOOD*, CALIF. - June 10, 1972 2015 - WHO IS DICK STARSPEED?! SCARLET NOVA - THE SPACE DIVA WITH A CHECKERED PAST - AND INTRODUCING...THE ROBOT! AMAZING ADVENTURES! STRANGE DRAMA! AND MORE AWAIT IN...THE DEADLY TOWER OF MONSTERS! THE ACTION-FILLED ADVENTURE GAME FOR PERSONAL COMPUTERS AND THE PLAYSTATION®4 ENTERTAINMENT SYSTEM, COMING THIS FALL FROM ATLUS AND ACE TEAM TO A DOWNLOADABLE TERMINAL NEAR YOU!

Marooned on the desolate planet Gravoria, the trio of adventurers find their only method of escape awaits at the top of a tower. A tower renowned for its deadliness and it propensity to be filled with monsters, lizard men, UFOS, nuclear ants, dinosaurs, robot monkeys. All of these horrors await our intrepid adventurers as they ascend the deadly tower. Will they avoid their own doom?

The Deadly Tower of Monsters is due on PS4 and PC this fall. We will bring you any news on this promising title as soon as it becomes available.

Rock of Ages 3: Make and Break Review – Made and Broke