As we head to the Mobile World Congress in Barcelona, there are a couple of things on everyone's mind as far as smartphones are concerned. We'll be getting to see quite a few new devices this year, coupled with new mobile chipsets, all of which are expected to set the pace for the Android world this year. After seeing benchmark scores of the Snapdragon 820 surface mostly in relation to Samsung's Galaxy S7, today the processor makes another appearance with a rather impressive score.

Last year wasn't a particularly fruitful one for Qualcomm, with the US chipmaking giant managing to gain little love with the launch of the Snapdragon 810. Before its launch, we saw the rumor mill abuzz with speculations on how the processor would outperform other once again with Qualcomm choosing to rely on the implementation of ARM's Cortex cores.

But the last couple of months of 2014 saw rumors surface of Samsung discovering overheating issues on the processor, and subsequently deciding to use its own, in-house Exynos 7420. All of this culminated in a 2015 seeing the 7420 dominate for the most part and Qualcomm choosing to work on the Snapdragon 820 instead; switching once again, towards Krait.

The manufacturer was in fact quick to release information about the chipset way before its official 'unveiling' as we got to learn about a more compact design. The Snapdragon 820 would be choosing to rely on a more closer integration of its GPU, Processor and the DSP; namely the Adreno 530, four Kryo cores and the Hexagon 680. This approach seems to be working for the company so far, as some recent benchmark scores suggest. 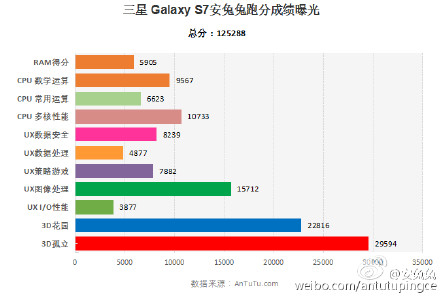 This year's flagship processor from Qualcomm simply seems to be making it quite a regular thing to cross 100k on Antutu, as yet another benchmark score has surfaced today. The Snapdragon 820 has appeared on an unknown device, dubbed as the Maryland Rockwille Zenimax Media. Hardware specifications for the device stand at a rear camera of 21MP, 4GB of RAM, 64GB of internal storage, screen size 6.2 inches and Android 6.0.

What impresses us is the alleged benchmark score of the Snapdragon 820, with Qualcomm's upcoming offering managing to score 146355, something which surpasses an alleged earlier score of 125288 achieved by the Galaxy S7. Considering that no bad news about the Snapdragon 820 has surfaced so far either, with a week left until we get to see the processor make its much awaited appearance on Samsung's flagship smartphone, things do seem to be heading in a good direction.

It's going to be interesting to see how Qualcomm's custom Kryo cores stand against the Exynos 8890's very own custom cores, where both the manufacturers might be able to dominate the mobile hardware market significantly this time around. Thoughts? Let us know what you think in the comments section below and stay tuned for the latest updates, leaks and launches.