Samsung's announcement of the Exynos 1080 was a surprise as it came unexpectedly. We soon figured out that it is not the much-awaited flagship Exynos 2100 that will be debuting in the Galaxy S21 series, but a mid-ranger appearing in several Vivo devices.

However, that does not change the fact that Samsung still makes it, so naturally, we did see some comparisons with the Snapdragon 865+ in which the Exynos 1080 was a clear winner, and that had our hopes up high because Samsung had been struggling with catching up to what the Snapdragon series of chips.

After the initial comparisons between the older generations, things went quiet for a while until today. Today, the Exynos 1080 appears again inside a Vivo X60 (Codename: V2047A), and it has shown up on Geekbench 5, and the results are impressive, say the least for a chip that is not even flagship. 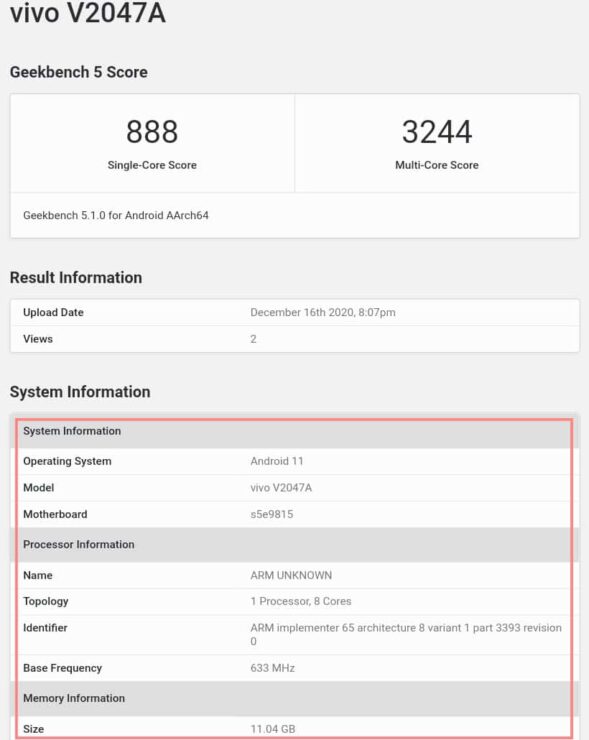 As far as the specs are concerned, the Exynos 1080 is made using Samsung's 5nm process and features a single Cortex-A78 core at 2.8Ghz, three Cortex-A78 cores at 2.6Ghz, along with four Cortex-A55 cores at 2GHz. It also uses ARM's Mali-G78 GPU, which has 10 cores. Exynos 1080 supports LPDDR4X and LPDDR5 RAM, UFS 3.1 storage, up to 200-megapixel camera configuration, and 144Hz refresh rate screens. The latest Exynos chipset is also equipped with a dedicated NPU, which is great for faster AI and machine learning tasks. It brings an integrated 5G modem that supports sub-6GHz and mmWave 5G.

Additionally, you have features such as GPS, Wi-Fi 6, Bluetooth 5.2, up to 4K/60FPS video recording, and 4K HDR10+ video playback. At the time of writing, no Samsung Galaxy device has shown up with the Exynos 1080, but considering how it is a powerhouse and a mid-range at one, we would love to see Samsung bring this one home.