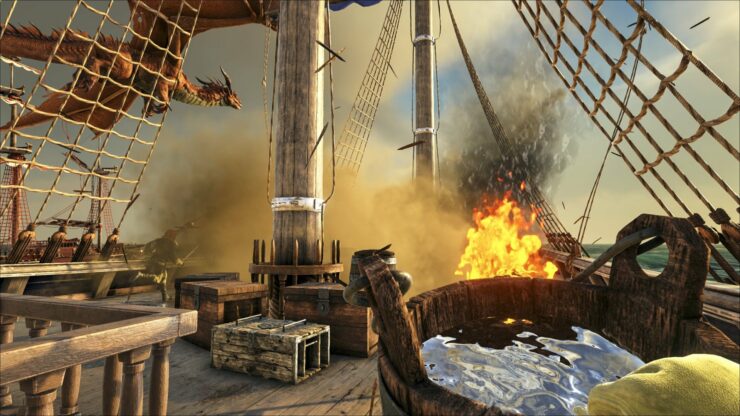 ATLAS, the MMORPG announced earlier this month by Grapeshot Games, has suffered a minor delay. It was supposed to debut on Steam Early Access yesterday, but the developers have now moved the date to Friday, December 21st.

Jesse Rapczak: It definitely will take hours. You calculated it one time, Jeremy – how long do you think it would take to sail across the map? Didn’t we say like 30 hours or something?

Jeremy Stieglitz: If you’re sailing in a straight line without any stops or detours, it would take you about 30 hours to sail across the world map – and that’s also if the wind was in your favour!

Jesse: Yeah, and keep in mind that we’ve got a bunch of systems to approximate how rough the journeys might be in real life. So things decay faster, your food consumption gets higher, stuff like that. You can’t just set sail and make a beeline for exactly where you want to go. Jeremy mentioned weather events earlier, we also have some sorts of perils at sea, like the army of the damned ships are roaming about. Those are AI opponents that are going to seek you out, and you’ll also have to worry about other players.

Jeremy: Not to mention the occasional aggressive sea life we have. Obviously there are sharks, but there are also gigantic angry whales, and some giant squids and other things. You never really know what you’re going to find out there, and that also depends on where you are in the world.

There are systems to make it viable for smaller groups of players to manage a far flung empire. We have fast travel. So if you have outposts spread all over the large world, you’re able to fast travel – just your actual character, nothing that you carry on you. Of course, servers can turn that off as an option because this game supports player-hosted servers, so everything’s configurable. If somebody wants a more hardcore experience, they certainly could disable that.

The map of ATLAS is said to be incredibly big, measured around 45 thousand square kilometers thanks to the new technology employed. That said, in the aforementioned interview, Rapczak and Stieglitz confirmed players will have the option to let a member of the AI crew take the helm so they don't have to steer the ship all the time.

ATLAS, due to be priced $30 during Early Access (though there'll be a $5 discount in the first few days as a promotion), is also scheduled to launch on Xbox One Game Preview in the first quarter of 2019.