The Gaming X Trio has lots of similarities to MSI's flagship Lightning X, you may even go as far as calling it a more tamed version of the Lightning with its own advantages. This beefy graphics card features a 2.5 slot design and a triple fan cooler which looks amazing.

The Gaming X Trio features the latest revision of MSI’s Tri-Frozr cooling solution that houses triple Torx 2.0 fans with double ball bearings. This cooling shroud features a black, silver and red color scheme that is themed like a dragon. The card includes MSI's Mystic Light RGB technology on the backplate which is fully customizable.

The cooling is provided by dual Torx 2.0 fans that come with dispersion fan blades and double ball bearings. These extend the cooling airflow and deliver low noise output even under intense loads. Furthermore, MSI's ZeroFrozr technology is onboard which means that the fans won't spin unless temperatures hit beyond 60C (Degrees). MSI is also using the latest Wave-Curved cooling system that splits the airflow and increases 10% effective heat dissipation area for better cooling.

The triple MSI TORX 2.0 Fan technology uses the power of teamwork to allow the hefty Tri-Frozr thermal design to achieve new levels of cool. These fans push air towards a very dense aluminum fin based heatsink block. This heatsink is fitted with a total of a total of 6 heatpipes that include 2 super pipes and 4 regular heatpipes, offering great cooling for the GPU, memory and VRM chips. The heatpipes lead towards are large nickel plated copper base which makes direct contact with the GPU.

MSI also features an anti-bending plate to support the PCB alongside a PCB backplate. The top of the shroud and the backplate comes with LED functionality allowing you to change the colors of MSI logo on the side of the card.

There's also a separate PCB base plate that is called "Close Quarter heatsink". This delivers better thermal performance to memory, VRM and electrical components and even has its own separate heatpipe cooling. 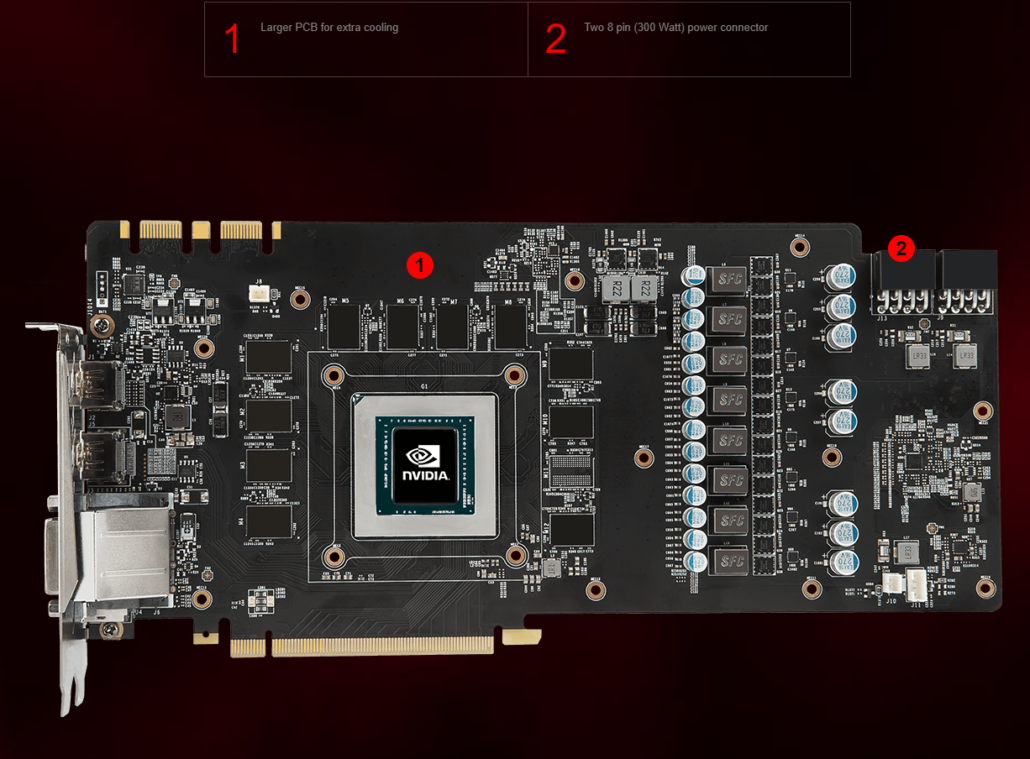 Memory on the card is 11 GB of GDDR5X VRAM that is clocked at a reference speed of 11000 MHz. With Gaming and Lightning modes, the memory overclocks to 11120 MHz for a good performance boost. The display connectivity on the card includes dual DisplayPort DVI, dual HDMI 2.0 and a single DVI port. Overall, this card operates as the same frequencies as the MSI GeForce GTX 1080 Ti Lightning X graphics card.

Coming to the PCB, we are looking at a fully custom design that doesn't got to as extreme lengths as the GTX 1080 Ti Lightning. Featuring MSI's Military Class IV components and 10 DrMOS power phases the card is based on High-end components such as 60 A, DrMOS MOSFETs, Hi-C CAP, Super Ferrite Chokes and solid state capacitors. Unlike the triple 8 pin connector setup on the Lightning, the Gaming X Trio relies on two 8 pin power connectors that are still able to supply the card with 300 Watts of power. 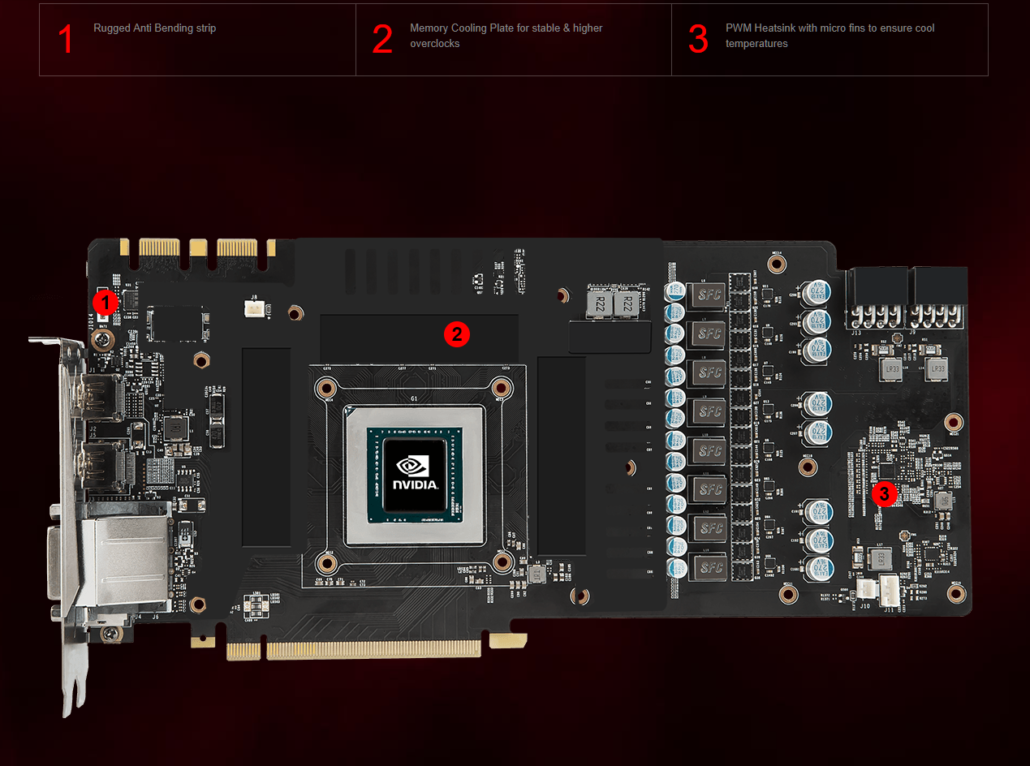 There's also multi-temp monitor sensors on board the PCB which monitor temperatures of various parts such as GPU, Memory, VRM through MSI's AfterBurner application.