A retailer based in Pakistan is taking pre-orders for NVIDIA's upcoming GeForce RTX 3080 Ti and GeForce RTX 3070 Ti graphics cards weeks before launch. The cards which the retailer mentions will be base models are priced more than twice their expected MSRP's which means that they are definitely taking advantage of the current supply situation and earning huge profits.

In our exclusive report yesterday, we stated how the NVIDIA GeForce RTX 3080 Ti and RTX 3070 Ti graphics cards will hit retail shelves on 3rd and 10th June, respectively. The company will not take pre-orders but an announcement is expected for the 31st of May. 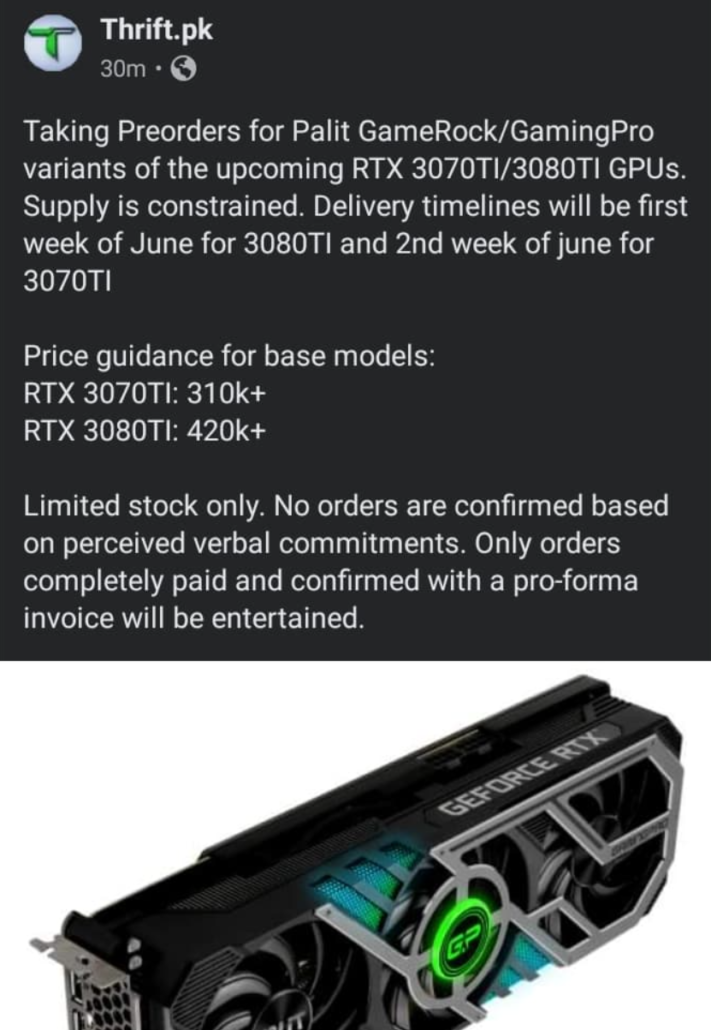 However, some retailers can't get away with old habits and are taking full advantage of the existing market situation by artificially inflating the prices of existing and upcoming graphics cards. We saw this happen with the GeForce RTX 3060 and now retailers based in Pakistan are doing the same for the GeForce RTX 3080 Ti and RTX 3070 Ti graphics cards. Retailer, Thrift.PK, has stated over on its Facebook page that they are currently taking pre-orders for Palit's GameRock & Gaming Pro cards.

The retailer mentions the following prices for these cards:

The prices mentioned above are only for the base models and premium variants are said to be priced even higher. The pricing puts the GeForce RTX 3080 Ti at almost twice the MSRP of the RTX 3090 while for the price of the RTX 3070 Ti, you can get almost four RTX 3070 (non-TI) graphics cards (if they were available at MSRP). The retailer states that the stock is limited and delivery will be made in the first week of June for the RTX 3080 Ti and 2nd week of June for the RTX 3070 Ti.

Usually, South Asian retailers and distributors don't care much about official NDA and we are seeing this to be the case over here.  While NVIDIA is unable to take any action on the current scalping situation, we hope that at least distributors such as these are dealt with some stricter actions considering that they are officially partnered with Palit who happens to be a big AIB partner of NVIDIA in the region.

These retailers will keep on taking advantage of customers in the region so the only hope is for NVIDIA to take action against Palit (and other manufacturers) who is supplying these retailers with cards and allowing them to sell them weeks ahead of launch at obnoxious prices.

The GeForce RTX 3070 Ti is expected to launch by the start of June for an MSRP of around $599 US. Expect more information to come on these cards in the coming weeks.