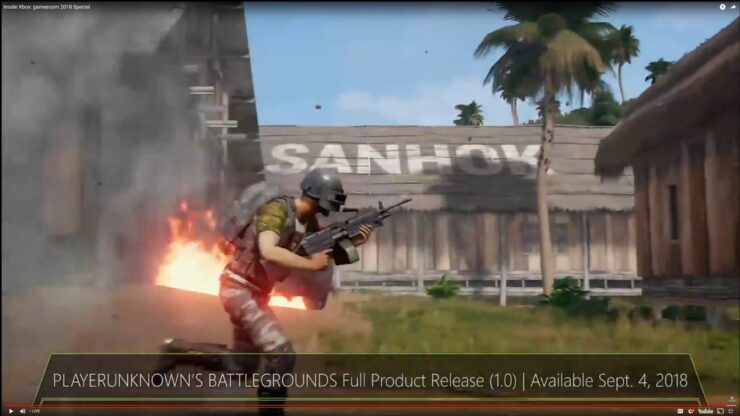 PUBG Xbox One (which just received another major patch today) is coming out of the Game Preview early access program very soon. This was announced during Microsoft's special Inside Xbox Gamescom 2018 live stream, where a trailer confirmed that version 1.0 of PUBG Xbox One will land on September 4th with the Sanhok map, custom matches (including War Mode), improved performance, major bug fixes. Moreover, Xbox Live Achievements will carry over from the Game Preview, in case you were wondering about this.

The full product release of PUBG for Xbox One will be available in both digital and retail disc versions, with the retail boxed version featuring an all-new colorway of the game’s iconic key art.

To celebrate the full product release of PUBG the retail disc version will ship with in-game DLC – the Xbox #1.0/99 Set, featuring an exclusive collection of clothing and accessories inspired by Xbox brand colors.  Current owners of the game, and new players who purchase the game digitally can download the exclusive Xbox #1.0 Set beginning September 4th for a limited time from the in-game lobby, featuring a white branded hoodie and sweatpants and a custom Xbox skinned parachute to drop into battle in style.

If you already own PUBG on Xbox One you will receive a content update with all new content and features detailed above on September 4th in addition to the Xbox #1.0 DLC Set.

It will be interesting to see for how long the console exclusive for PUBG Xbox One holds true. Bluehole is certainly eager to jump on the PlayStation 4 market, particularly after Daybreak's H1Z1 did amazingly well there.