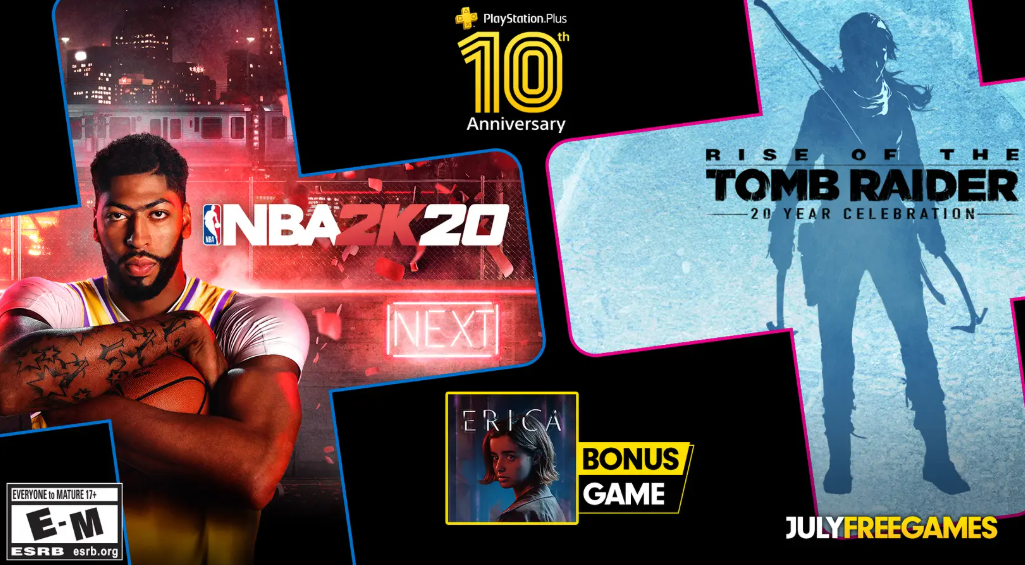 The PS Plus July 2020 games have been revealed by Sony alongside a bonus game to celebrate the service’s 10th anniversary.

Available to PS Plus subscribers from July 7th through August 3rd are the brilliant Rise of the Tomb Raider (20 Year Celebration Edition) and NBA 2K20. Also joining the  ranks of free PS Plus titles is cinematic experience Erica, which is being added to the service as a bonus to celebrate 10 years of PS Plus. In Erica, players take on the role of a brave young lady plagued with nightmares of your father’s murder.

To play Erica, users will need the ERICA companion app, a Wi-Fi connection, and either a compatible iOS (iOS 9.0 or later) or Android (4.1 and up) smartphone.

NBA 2K has evolved into much more than a basketball simulation. With its immersive open-world Neighborhood, NBA 2K20 is a platform for gamers and ballers to come together* and create what’s next in basketball culture. Take your skills to the next level, featuring an upgraded motion engine with signature styles, advanced shooting controls, a new dribble size-up system, refined off-ball collisions, and a new read & react defensive game.

In Rise of the Tomb Raider, Lara uncovers an ancient mystery that places her in the crosshairs of a ruthless organization known as Trinity. As she races to find a powerful and sought-after artifact before Trinity, the trail leads to a myth about the Lost City of Kitezh. Lara knows she must reach the Lost City and its hidden secrets before Trinity as she sets out for Siberia on a thrilling expedition.

Aside from new titles, Sony is also making a free PS4 theme available to celebrate the 10th anniversary of PS Plus.  This theme will be released later this week via the official PS Store for a limited time.